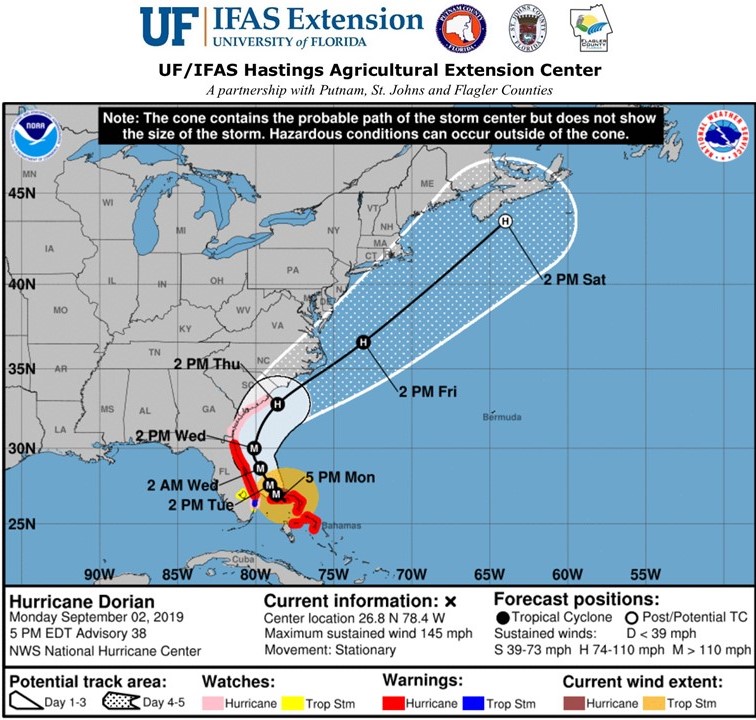 After being stalled over the Bahamas for the majority of the holiday weekend, Hurricane Dorian is expected to start moving north today, still staying off the east coast of Florida.

Gary England from the University of Florida released another update this morning about how the storm may impact northeast Florida as it slowly starts heading north:

In the 5 AM NWS NHC Update, discussion states the storm has remained stationary for over the past 18 hours and that the further weakening of the Atlantic high pressure ridge and approaching trough of low pressure from the northwest should prompt movement later today.  Although the storm has weakened some more, it is expected to remain a major hurricane off of the Florida Coast.

I have included a graphic indicating the expected onset of tropical storm-force winds below.  Not much changes in watches and warnings, other than tropical storm warnings from Ponte Vedra north the Brunswick Georgia area being posted.

Gary England from the University of Florida has released another update on the track of Hurricane Dorian:

There have been some significant developments since the last update.  First, the long awaited jog to the left of Dorian has begun.  I’ll place a link to the latest GOES 16 imagery below for those wishing to take a look.  There is a very significant jog about mid-way through the current loop.

The forecasters appear to be getting sufficient data to see how other external weather systems could affect the eventual track of Dorian.  Landfall is still anticipated somewhere along the Treasure Coast down to the Palm Beaches Monday afternoon/evening but longer range track has changed significantly over the last 12 hours.  As the NWS NHC graphic below indicates, instead of making landfall and drifting west northwesterly, they are looking at a fairly abrupt turn to the north northwest instead.  This sharp turn is suggesting other systems to the north could begin taking control four or five days out.

In previous updates, the track at the time had very significant rainfall accumulations for most of northeast Florida and the 11 AM today still does as depicted in the NWS WPC graphic.  The good news is should the track move a bit more east of current, rainfall amounts should lessen.  As we all know the tracks of these systems continue to change but the expected rainfall pattern expected with the storm should stay pretty consistent relative to eventual track.  The bottom line being, if the eventual track can move another 50 or so miles east, total rainfall accumulation expectations for northeast Florida should reduce somewhat.  Time will tell.

Wouldn’t be surprised for watches being issued on the southeast coast of Florida this evening, as they already have been for the Bahamas.  We will continue to monitor and be back with updates.  please let me know if you have any questions.

An economist with the University of Florida Institute of Food and Agricultural Sciences wrote a release today, detailing the extent of potential damage to agriculture in the wake of Dorian. The release comes just hours after news broke that Dorian could be a Category 4 storm when it reaches Florida’s east coast. Read the release here.

The forecast has taken a bit of a left turn and is now expected to hit Cocoa Beach on Labor Day. This decreases the probability of North Florida seeing some hurricane-force winds, but it still has south Florida in the danger zone.

You can see a loop of wind speed probabilities here.

Hurricane Dorian is expected to make landfall on the East coast of Florida by Labor Day. Florida Governor Ron DeSantis is urging east coast residents to prepare for the storm.

As of Aug. 28, Dorian is expected to be a category three hurricane by the time it hits the Southeast.

Gary England, director of the University of Florida (UF) Hastings Agricultural Extension Center, has been sending email updates to growers in the tri-county area, which includes Putnam, St. Johns and Flagler counties. Below is England’s latest update as of Aug. 28 at 1:16 pm EST:

The 11 AM NWS NHC update is in and I can’t really say there was any encouraging news within.  In the graphic below you will note that at this time, Dorian is expected to make landfall as a major hurricane somewhere around the Kennedy Space Center on Monday (Labor Day) morning.  According to current discussion, the momentum of now Tropical Storm Dorian is a bearing of 315 degrees (northwest).  The expected turn of this system to a more westerly tangent sometime Friday is dependent on the building of a ridge of high pressure affecting the storm.  If this ridge builds earlier, the expected course change could result in a more southerly landfall and if it builds later, the landfall could be further north and no landfall is still in play but becoming less likely.

An important forecast tool is the NWS NHC Tropical Storm-Force Wind Probability graphic.  The current version below is about a worse case scenario for central Florida into southeast Georgia for now.  I highly suggest monitoring this graphic in my future messages or check the loop version linked below:

Arrival of hurricane force winds is also available on this tool.  Please let me know if you need assistance in finding this and other NWS resources.

Considering the seriousness of the threat from this system, I will update storm progress more frequently until the situation is resolved.  Please let me know if you have any questions.

Pam Knox, agricultural climatologist with the University of Georgia Weather Network, also sent out a release warning the Georgia agriculture community of what may be coming their way. Below is a portion of her release:

If you are in southeastern Georgia, you should be prepared for tropical storm force winds to hit as early as Sunday morning. That means you need to remove anything from outdoors that could become a flying projectile by Saturday night. We should have mostly dry weather through Saturday, but after that the chances for rain go up as onshore flow brings a lot of moisture to the area. Along the coast, onshore flow coupled with the already higher than normal tides will increase the chances of flooding, and that will only be made worse by the tropical rainfall. Spiral bands ahead of the storm could produce brief tornadoes in isolated thunderstorm cells. Power outages are likely due to the combination of wet soil and strong winds blowing trees over.

If you are in southwestern Georgia, do not let your guard down. A number of computer models indicate that the storm may cross the Florida peninsula and enter the Gulf of Mexico, where sea surface temperatures are above normal. A recurve to the north into Georgia is a possibility, and even if the storm weakens as you might expect, heavy rain and brief tornadoes could occur in that situation. The timing would be starting early next week due to the extra time it would take for Dorian to cross Florida, so you still have time to watch and prepare.

If you are in central and northern Georgia, you have more time to watch the storm development, but you should also prepare for potential tropical storm force winds and heavy rain at times. The timing of the impacts would most likely be Tuesday through Thursday based on today’s forecast, but that could change depending on where Dorian actually goes and how fast it is moving. In any event with potentially heavy flooding, you should move equipment and livestock out of low-lying areas in advance of the storm and make sure you have fuel and the capacity to provide power if you need it for milking, drying of crops, etc. The combination of strong winds and rainfall means that falling trees are more likely and will impact power availability.

Stay tuned to this post for updates throughout the coming days.