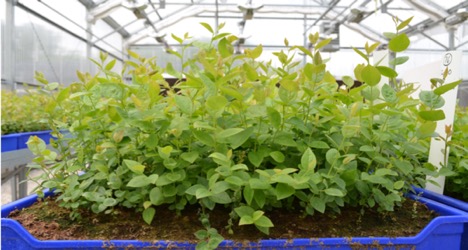 By Patricio Munoz and Doug Phillips

The University of Florida (UF) blueberry breeding program has a long history of pioneering the development of southern highbush blueberries (SHB) that can thrive in Florida’s hot, humid climate. The breeding program focuses on developing varieties with high yield, good fruit quality and early ripening within a shrinking market window. The success of Florida’s blueberry industry can be directly tied to the varieties developed by UF, along with the efforts of blueberry growers across the state.

EARLY EFFORTS
Ralph Sharpe began work on breeding blueberries for the Florida climate in 1949 at UF, collaborating with George Darrow, the U.S. Department of Agriculture blueberry breeder at the time. He was followed at UF by Wayne Sherman. Their efforts focused on crossing northern highbush cultivars from Michigan and New Jersey with native Florida blueberry species. They hoped to obtain offspring from these crosses with a lower chilling hour requirement, longer leaf retention to support early bloom set, and improved adaptation to heat and disease. They developed and released the first two SHB cultivars, Sharpblue and Flordablue.

Beginning in 1977, UF’s Paul Lyrene built upon these efforts and successes. Over the next 32 years, he developed and released more than 30 new SHB cultivars, including evergreen varieties that produce early harvests throughout central and south-central regions of Florida. Lyrene was succeeded by Jim Olmstead, who continued developing and releasing new SHB cultivars. Patricio Munoz heads up the UF blueberry program today and is leading the program into the future by utilizing both traditional breeding methods and new molecular-based technologies.

THE BREEDING PROCESS
Blueberry breeding is an intensive, time-consuming process. From the initial cross-pollination of two parent plants until a named cultivar is released and patented can take 10 to 12 years. The traditional breeding method for this crop (still extensively used today) is the recurrent phenotypic selection method. Under this method, selection of superior blueberry plants based on favorable traits occurs over succeeding generations, and intermating of selected plants takes place to produce the next cycle of selection.

In the UF breeding program, up to 200 sets of parents are cross-pollinated by hand each year, and 20,000 seedlings from these crosses are planted out in a high-density nursery. These seedlings go through two stages of selection in years 3 through 5, based on fruit quality, plant health, vigor and other traits. At the end of the second stage, 200 plants are selected to move to stage three. At this point, they are assigned a selection number, clonally propagated by stem cutting and planted out in greater numbers.

The fourth and final stage of the process consists of 15 to 20 of the best selections from stage three, which are propagated and planted at trial sites across the state. The selections are evaluated under different environments and management systems for yield, fruit quality, growth and disease resistance. Elite selections meeting the rigorous standards of the breeding program from this final stage will ultimately be named, patented and released to nurseries for sale to blueberry growers.

QUICKER CULTIVAR DEVELOPMENT
Currently, molecular methodologies are also being investigated and utilized to accelerate the process of cultivar development. These methods consist of identifying molecular markers linked to genes of interest, and then selecting for those markers in the future seedling populations. The goal is to accelerate the process of identifying better parents for the next generation of breeding, and better cultivars for advanced testing in stage four trials (as described above). Traits being investigated are related to fruit quality (flavor and firmness) and mechanical harvesting characteristics (detachment force, pedicel length, etc.). These methods are a complement to the traditional methods and provide a more accurate way to select future populations.

The UF blueberry breeding program receives royalties from the sale of its patented cultivars. The entire portion of royalties that comes back to the breeding program is reinvested in continuing the development of new cultivars and the knowledge base about production systems, pests, disease, pollination, fruit set, fruit quality and methods to accelerate the cultivar development program. This work will directly benefit all Florida stakeholders, with the goal of providing them with an edge in the current competitive market.

Patricio Munoz is an assistant professor and Doug Phillips is a blueberry Extension coordinator, both with the University of Florida.