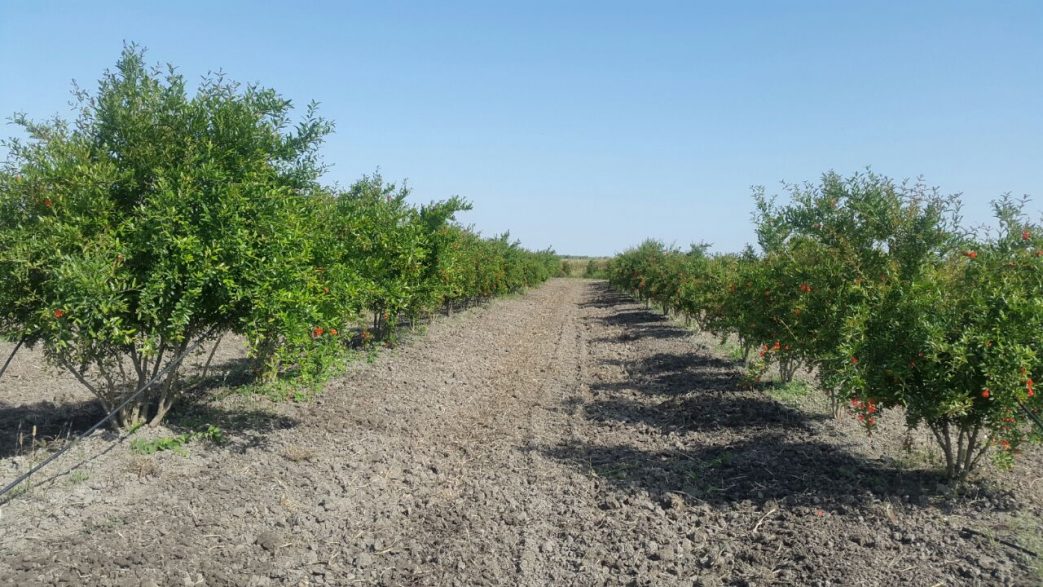 An annual cover crop in a pomegranate orchard

By Ali Sarkhosh and Danielle Treadwell

Most Florida orchards display low soil fertility. The soil is highly susceptible to erosion, low in organic matter content and, therefore, low in water-holding capacity and nitrate retention. Low organic matter content in the soil is associated with sub-optimal plant development due to a reduction in annual nutrient consumption and therefore total nutrient content in the leaves.

THE ROLE OF COVER CROPS

Cover crops are grown to increase soil organic carbon, protect soil from erosion, and to improve soil structure and biological health in both perennial and annual cropping systems. When cover crops are terminated when they are actively growing and incorporated into the soil, they are often called green manures. Cover crops and green manure crops can play an essential role in orchard management in Florida. Cover crops increase soil water-holding capacity and improve the efficiency of soil nutrient use. They also recover nutrients from deep in the soil, which are then recycled to the surface when the cover crop is incorporated back into the soil.

Organic matter additions from cover crops lead to an increased capacity for soils to hold nutrients (increased cation exchange capacity), and contribute to soil organic carbon sequestration, storage and retention. Carbon is input into soils directly via inorganic materials and indirectly via changes in the amounts of crop and root residues in the soil.

Cover crops are generally categorized as either grasses or legumes. Other non-legume broadleaf species such as buckwheat and sesame are also used as cover crops.

Grasses such as sorghum produce a significant amount of organic matter. With proper management, grasses develop quickly and can be mowed several times during the season before incorporation into the soil. These crops can take up to several months to break down entirely in the presence of suitable moisture and are, therefore, a better source for returning carbon to the soil.

Legumes such as sun hemp, cowpea and clover can generate a good amount of mass/organic matter. Such legumes may be a good choice in a short cover-cropping period, since they are quicker in establishing themselves and thereby provide better protection against erosion. Legumes also improve soil fertility by adding nitrogen. However, when slashed and tilled, legumes typically decompose more quickly than grasses because they do not have as much structural carbon as grasses.

A combination of grass and legume cover crops can also be utilized. Such combinations exhibit fast establishment and sustained rates of decomposition while also having the biomass of the grasses. A perennial cover crop in a pomegranate orchard

THE EFFECT OF CLIMATE

In temperate climates, cover crops can sequester organic carbon and increase the organic carbon stock of eroded and degraded soils. However, the use of cover crops in tropical conditions tends to have little to no impact on short-term gain in soil organic carbon level unless tillage is significantly reduced. The moist and hot conditions offered by the wet season generally favor rapid decay of organic additions, resulting in no appreciable change in the short term when the plant material is incorporated into the soil immediately after termination (green manure).

Cultivation enhances the breakdown of organic carbon sources as soil aggregates are disrupted, making protected organic matter available to microorganisms. Tillage also aerates the soil and promotes microbial action, thereby speeding up the rate of decomposition. In Florida soils where temperature and moisture levels are high, especially during the wet season, minimum tillage practices need to be adopted as cultivation promotes microbial activity and exacerbates decomposition of organic material.

Studies suggest that long-term cover cropping over a number of seasons is required to alter the carbon levels of degraded soils. Extensive additions of crop residue may temporarily increase the organic fraction of the soils, but need to be continuously maintained, or soil will revert to its usual steady state of low organic carbon.

This article was featured in the August issue of VSCNews magazine. To receive future issues of the magazine, click here.