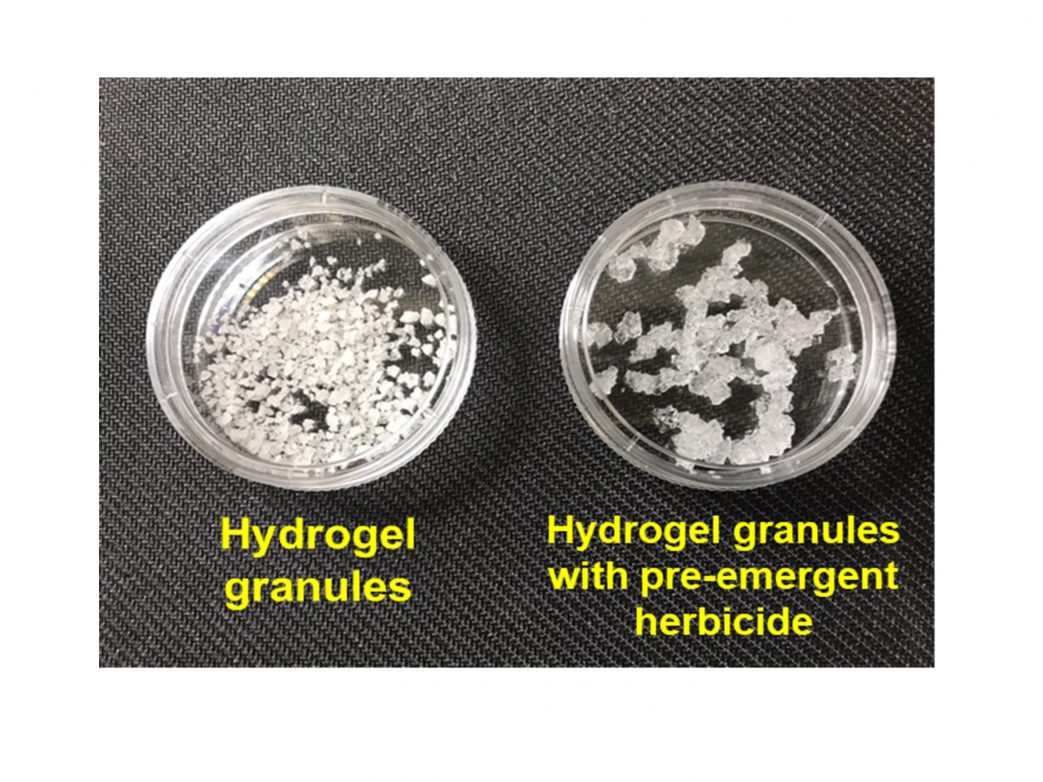 By Ramdas Kanissery and Camille McAvoy

Weed management is a fundamental step in the successful production of vegetable crops in Florida under commercial plasticulture production systems. Soil fumigation was one of the most successful means of reducing weed populations. None of the alternatives to methyl bromide have a broad spectrum of activity against weeds. This necessitates the need for a pre-emergent herbicide application for weed emergence in raised plastic beds. However, such applications are severely limited due to the potential for phytotoxicity. Hence, tremendous interest has developed recently in adopting techniques that protect vegetable crops from herbicide injury while providing adequate weed control.

One concept that has surfaced from the need to find alternative, crop-safe weed management in vegetable production is the use of hydrogels for herbicide application. Hydrogels (also known as superabsorbents) are polymers characterized by extensive water absorptiveness. According to a recent report, hydrogel can absorb water more than 400 times its weight (Source: Current Science, 2016, 111, no.11).

Hydrogels are produced using biodegradable and synthetic substrates. They are readily available and known for being incorporated into potting soil mixes for moisture control. When mixed with soil, hydrogels act as water buffers to ensure moisture supply for plants and thereby minimizing water stress. Hydrogels have become established mediums for the responsive or controlled release of therapeutic agents in general. However, their application in agriculture for the delivery of crop protection chemicals in the field has not been explored well. The potential loss of soil-applied pre-emergent herbicide occurs through environmental degradation by light (photolytic degradation), moisture (hydrolytic degradation) and soil microorganisms (microbial degradation). Losses in the field from volatilization and leaching may occur as well. As a result, concentration of herbicidal active agent in the target site is reduced rapidly — often below the effective concentration required to maintain adequate weed control.

Advantages of hydrogel-based herbicide applications include stabilization of active ingredients against environmental degradation by light, moisture or microorganisms. For example, a study by Sopena et al. (2011) showed that environmental degradation of the widely used pre-emergent herbicide norflurazon was considerably reduced when ethyl cellulose-based polymer was used as its slow-release carrier. Figure 2. Nutsedge (Cyperus spp.) control in vegetable plasticulture production by hydrogel-based herbicide application. This is part of an ongoing pepper trial at the Southwest Florida Research and Education Center in Immokalee.

In an ongoing research project at the University of Florida Institute of Food and Agricultural Sciences (UF/IFAS) Southwest Florida Research and Education Center (SWFREC) in Immokalee, an attempt is being made to design the controlled release of pre-emergent herbicides in vegetable plasticulture utilizing hydrogels. Herbicide materials will be suspended within the polymer matrix (Figure 1). Small quantities of these herbicide compounds may be released continuously, thereby protecting the transplanted crop from phytotoxic levels of herbicide exposure while also disrupting the weed emergence efficiently. The preliminary observations are encouraging, especially in controlling nutsedge (Cyperus spp.) emergence within the raised beds (Figure 2).

Ramdas Kanissery is an assistant professor and Camille McAvoy is a laboratory technician, both at the UF/IFAS SWFREC in Immokalee.