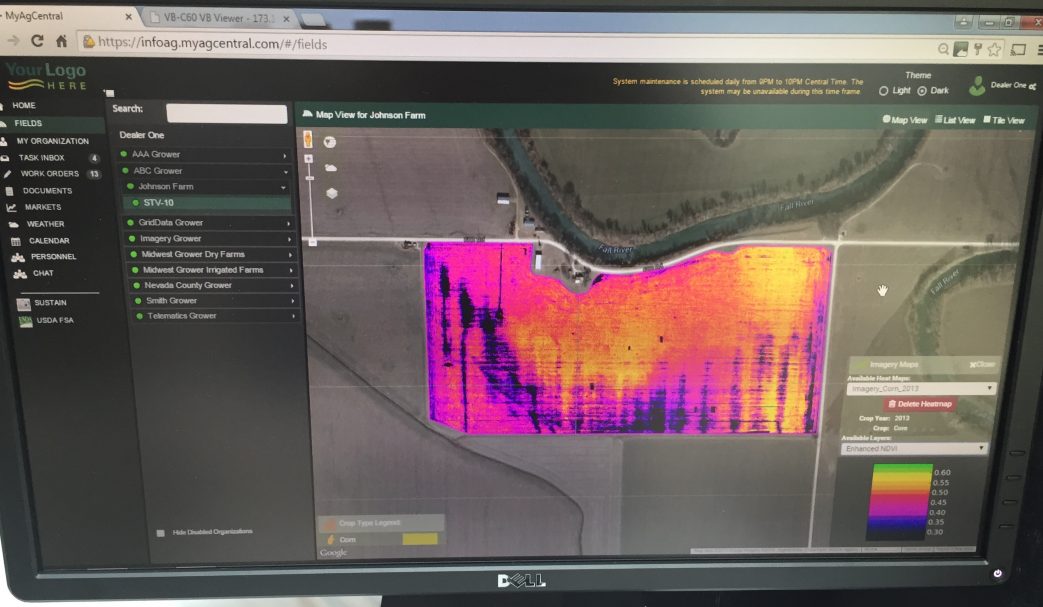 An explosion of technology has changed virtually every aspect of the human experience since the turn of the millennium. While innovations are conspicuous in communication, transportation and medicine, technological tentacles have been slower to creep into agriculture. However, over the last five years, there has been a tremendous upsurge in how science and engineering merged with the farm. Today’s farm is a collection of sensors, chips, drones, satellites and laboratory support.

While urban foodies cry for a return to the ancient and simple, true sustainability will be more rapidly realized with implementation of new technology that can sense, report, analyze and respond to on-farm issues with tremendous precision and speed. To date, these technologies have been confined to agronomic crops, but the next frontier is adaptation to specialty crops.

The purpose of this article is twofold. First, it is to celebrate the new roles of high-tech solutions in agricultural applications. Second, it is to inspire our best minds in computational science, engineering and statistics to take a hard look at how their skills can complement food, fuel and fiber production. Geek-chic meets boots-on-the-ground, giving rise to the farmer-technophile connection, or perhaps, the “Farm to Dork” movement.

The author stands with a fixed-wing drone, the kind used to gather images for computational analysis of field parameters.

If you know what you are looking for, crops on growing fields can provide important information about their general health and productivity. It has been known since the 1980s that reflected light from specific portions of the spectrum provides important diagnostic information about plant stress. Whole-field images may be processed through specific filters that provide signatures of pest presence, nutrient deficiency and irrigation issues. Other software can analyze images to show stress due to plant density or even guide nitrogen application.

Laser-enabled survey technologies accurately map topology from the air, creating accurate and useful contour maps. Image analysis is “georeferenced,” that is, connected with coordinates that ensure that aerially diagnosed issues are addressed precisely by on-ground approaches.

Most images are gathered by unmanned aircraft, popularly known as drones. These agricultural aircraft rival the cutting edge of military equipment in use only a few years ago. These small planes take off, fly a preprogrammed flight path, do surveillance, and then land on their own, uploading massive amounts of data to servers during the flight.

Drones are now being retooled for specialized missions. They are even being deployed to identify and map weeds in the field. Future technologies will use drones to visually detect insect pests or signatures of their damage. Others will be equipped with electronic noses that will sniff for volatile compounds emitted by certain pathogens.

After reporting back the coordinates of the problem, a second set of drones, or even unmanned rovers on the ground, will be deployed to apply precisely targeted pest controls. All of this will be done without human participation, 100 percent driven by decision-making software. Such solutions will address site-specific incidence, rather than blanketing acres of land with a given pest control strategy.

High above the drone space are satellites that can map soil moisture and organic matter content. Software can integrate information to best predict planting and harvest dates, as well as provide projections of yields. Such technologies can also be used to help obtain accurate measurements of damage for crop insurance claims, as well as verify the veracity of claims made.

The integration of software, statistics and farmland creates massive amounts of data that can reveal everything from planting density to insect controls. The bottom line is that these technologies represent a way to raise production with fewer inputs, thanks to an overlay of precise diagnostic and predictive tools.

For instance, one operation I toured outside of Guelph in Ontario, Canada had topological maps that showed better yields coming from low spots in the field, places also shown to contain higher amounts of organic matter and more uniform moisture throughout the previous growing season. These locations will be seeded more densely to take advantage of the available resources.

The high costs of labor are increasingly prohibitive, and shortages are more frequently reported between seasons and locations. The ability to assign tireless robots to the task of picking fruits and vegetables has long been a dream of ag producers. Finally, its time has come.

Machine vision and associated software has evolved to the point where field-based robotics are at the precipice of reality. The first generation is likely to be “armchair” devices where an off-site human will use real-time imaging to guide on-site robots through the picking process. Eventually, machines will be trained to operate without a human at the controls, using a series of real-time, infrared-light-based analyses to test fruits for qualities like color, firmness or sugar content. These technologies currently exist, but are slow to reach the field and are limited to a number of crops. Software packages can analyze data collected by remote sensors and imaging. This typical field image demonstrates the variation in moisture and crop stress.

Modern electrochemical sensors can monitor facets of soil quality in real time from a moving tractor. Soil pH, moisture content, nitrate and potassium are all ascertainable with a series of simple sensors.

For example, a trailer can follow a tractor and pull a core of soil at predetermined intervals. The soil cores are matched with a GPS coordinate and sent for analysis. Each core is studied for nutrient content, organic matter, salinity, moisture content and other metrics of interest. Other sensors can remain in the ground at a given location and report back moisture levels, pH and conductance associated with fertilizer levels in real time.

In all of these cases, the information gathered is used to guide variable-rate application of nutrients or amendments to the same location. Soils rich in potassium get less. Areas depleted get more. Tensiometers linked to the internet advise on the necessity of irrigation.

In other cases, weather stations have been installed that measure local temperature, humidity and wind conditions. The information is integrated to make predictions of the likelihood of disease incidence on crops, informing growers about which fungicides to apply and when to apply them. The website agroclimate.org is the starting point, and associated weather stations send text messages to subscribers, advising them when conditions are most perfect for pathogen problems, so that pre-emptive action can be taken.

The point is to match optimal levels of fertilizer or crop protection by knowing the real-time situation on the ground, and applying only what is needed. Such approaches are tremendous steps that enhance both economic and environmental sustainability.

Deep inside the modern grain bin, you might find a curious-looking, blue, plastic bean-shaped pod. This device is charged wirelessly by ambient radio energies and gathers information about humidity, CO2 levels, temperature and air quality. The information is then reported back to a computer or smartphone. The devices, known as BeanIoT (internet of things), are also useful in barns, beehives and on agricultural equipment. They describe the position and movement, as well as the previously mentioned measurements. Such devices allow connectivity with agricultural materials, helping to ensure and promote high quality and lower costs.

The next green revolution in agriculture will center around the green plastic card that is the foundation of the circuit board. It is an exciting time to begin to consider how new technologies can play a role in every ag operation, even in smaller farms.

It also is important to raise awareness of these amazing innovations, as they are occurring simultaneously with an improved interest in food, farming and sustainability. The strategies discussed here are just highlights on the cutting edge of what is to come, and hopefully will attract the brightest technical wizards to participate in the next wave of modern farming technology.

Kevin M. Folta (kfolta@ufl.edu) is a professor and chair of the Horticultural Sciences Department at the University of Florida in Gainesville.