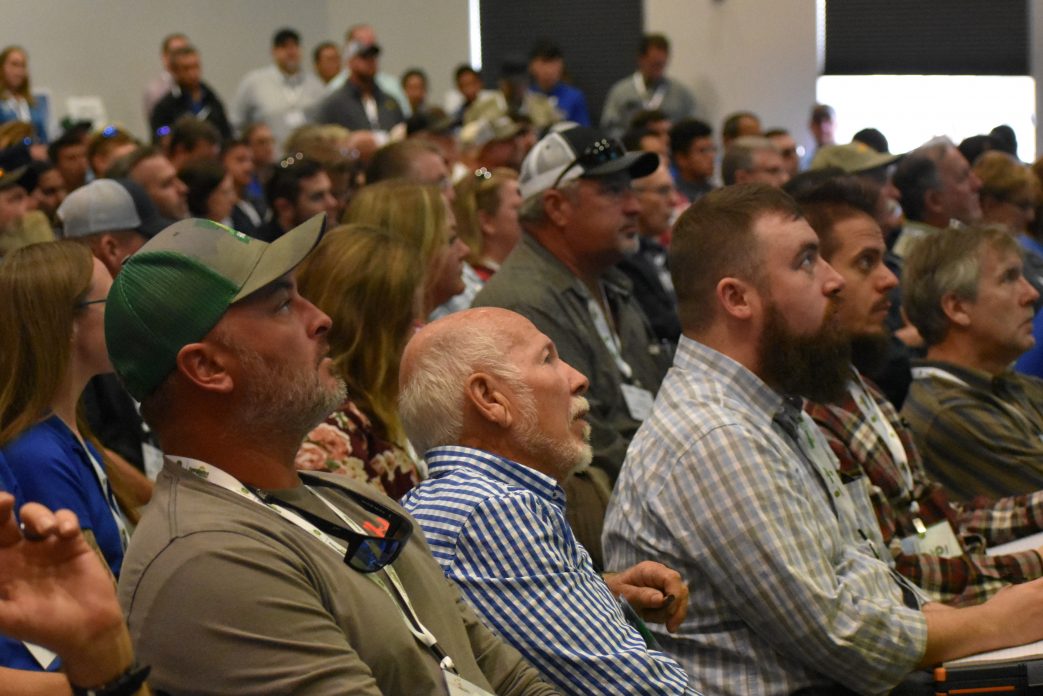 By Ernie Neff and Tacy Callies

A record crowd of almost 1,000 filled the seminars and trade show at Florida Ag Expo (FAE). The event took place on Nov. 21 in Wimauma at the University of Florida Institute of Food and Agricultural Sciences (UF/IFAS) Gulf Coast Research and Education Center (GCREC). The number of growers attending also set a record — “300-plus versus about 100 last year,” said Jack Rechcigl, GCREC director.

UF/IFAS worked closely with AgNet Media, the new manager of FAE, to make the event successful. “AgNet Media is super pleased to see growers turn out this year and really appreciates the sponsors and exhibitors for their support,” said Josh McGill, AgNet Media event manager. “We appreciate the partnership with UF/IFAS and the Gulf Coast Research and Education Center.”

Holly Bell, director of cannabis for the Florida Department of Agriculture and Consumer Services (FDACS), expects hemp cultivation to begin in Florida in 2020. She said hemp became legal in Florida on July 1, but growers and others can’t begin operations until FDACS completes rulemaking. At the time of Florida Ag Expo, FDACS was tweaking its rules to make them align with U.S. Department of Agriculture rules governing hemp production.

Hamilton said industrial hemp cannot legally contain more than three-tenths of a percent THC, the psychoactive compound in cannabis. Exceeding that level can lead to destruction of a grower’s inventory. “Many farmers are learning to manage that risk by harvesting certain cultivars a little earlier than full maturity to make sure it is a legal crop … Production of the crop is challenging.”

Adams said hemp growers deal with fungal pathogens and insects. “Another problem that we’ve seen is that a lot of growers have sort of jumped feet first into this and they don’t necessarily have a processor or a contract to get paid,” he said.

Asked about the bottom line of hemp production, Hamilton said some (not most) growers are profitable. She explained that hemp production is still in the early stages and much infrastructure is still being developed. “Those owners may not always see their contracts being fulfilled the way they were expecting,” she said. But she reported that other growers say they make twice as much profit with hemp as they made growing tobacco.

Adams added: “In the state of North Carolina … it would be remiss for me to say that most are profitable at this point.” He said veteran growers were most likely to be profitable because “they have the experience under their belts.”

In both Kentucky and North Carolina, more than 90 percent of the hemp is grown for CBD production.

“The state of Kentucky has been very pleased with what we’ve learned in the last six years, and I would just encourage everybody in the state of Florida … to be cautious but to be optimistic,” said Hamilton.

Adams said, “I’d 100 percent echo that. There’s definitely some hope out there in the industry. It can be profitable … But again, you need to be cautious. You need to do research; line up your buyer.”

Zach Brym, a UF/IFAS scientist researching hemp production, also sat on the hemp panel. “We know hemp will grow in Florida,” he said. “We saw healthy and happy hemp plants here in Florida.” He added that light, heat and excessive water are issues that face hemp growers.

The alternative crops tour gave growers a firsthand look at artichoke, hemp and hops trials and concluded with a hands-on look at postharvest technologies. Tour-goers saw seven cultivars of artichoke that researchers are trialing to determine what grows best in Florida for winter production. In the hemp field, visitors were excited to see the new crop growing and took lots of photos and notes. The hops yard drew a great deal of interest, as attendees watched a harvesting demonstration and were treated to beer samples made from GCREC-grown hops.