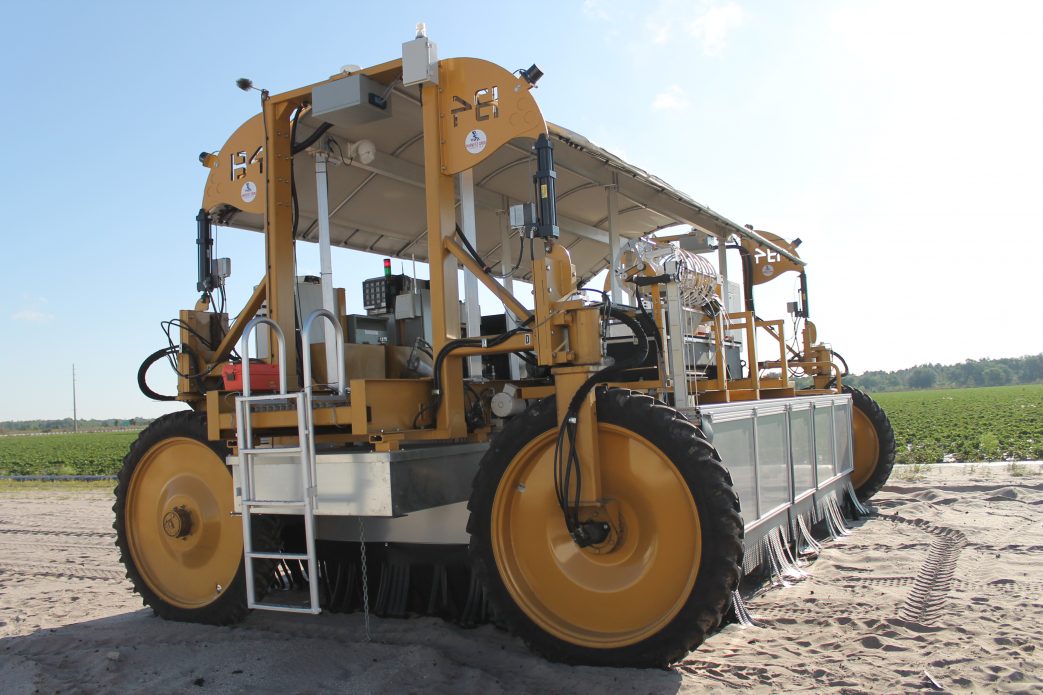 An experimental robotic strawberry harvester appears to barely creep through a field in Duette, Florida. That belies a flurry of activity occurring out of sight.

“It’s walking speed as it moves through the field, but the robots are moving at a good clip inside,” says Scott Jantz. “These robots are spinning underneath … furiously picking plants.” Jantz is lead electrical engineer for Harvest CROO Robotics, which has been developing the harvester since 2013.

When the harvester is used commercially, it will carry 16 robots that pick 16 strawberry plants simultaneously. Developing a vision system that determines if individual strawberries are ripe was “the trickiest part of this whole process,” Jantz says. He adds that the harvester will go through a strawberry field multiple times per season, because “berries are ripening all the time.”

Gary Wishnatzki, owner of Florida-based Wish Farms and co-founder of Harvest CROO Robotics, says the machine will soon become the United States’ first commercial strawberry harvester. “We plan to have a commercial vehicle in the field harvesting as a service next year (2020),” he says.

According to Wishnatzki, Harvest CROO Robotics wants to harvest in strawberry fields as they already exist in the United States. “Some of the competitors (developing harvesters) are requiring growers to radically change how they grow and invest in expensive growing systems,” he says.

Mechanical harvesting is expected to help growers cope with a diminishing supply of harvesting labor, Wishnatzki says. Strawberry growers have depended heavily on the federal H-2A guest worker program for labor. But that program will become more challenging in the future, he predicts.

Wishnatzki says fellow U.S. strawberry growers are in his court. “We’ve got about two-thirds of the U.S. strawberry industry, including some of the major players, that have invested money in Harvest CROO Robotics,” he says.

Jantz predicts that robotics will soon be used in more agricultural practices in the future. “Harvesting is just the beginning,” he says. “We’re going to be able to do a lot more things in agriculture with robots in the future.”