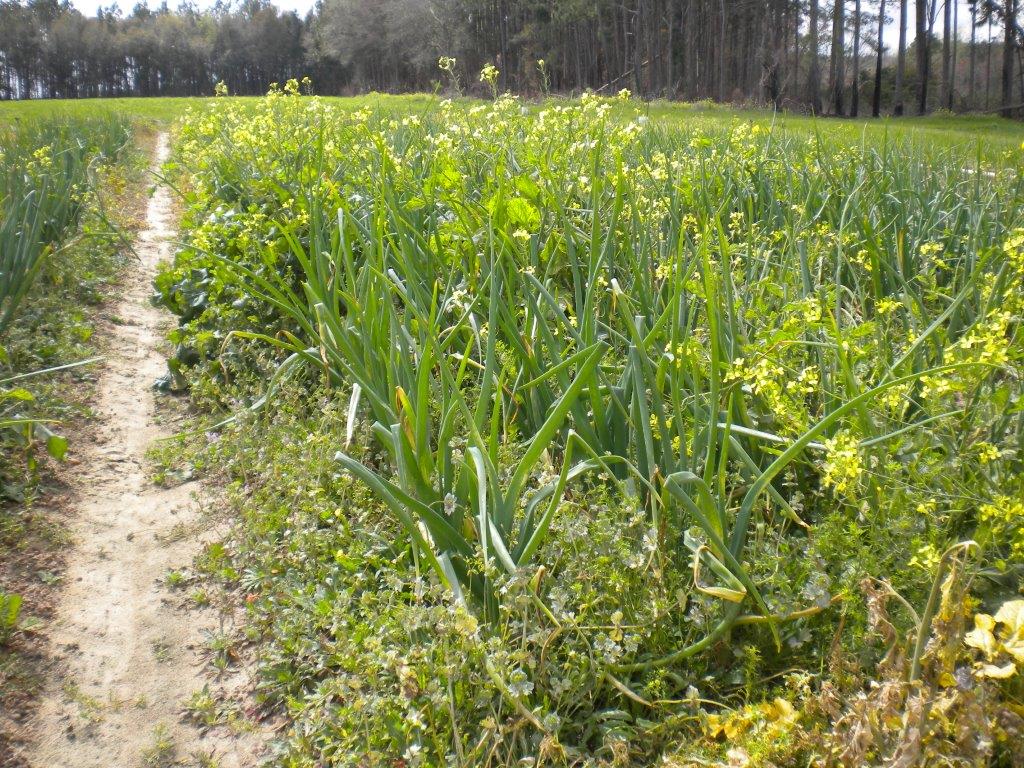 Vidalia onion ranks first in terms of farmgate value among vegetables in Georgia, making it the most important vegetable crop in the state. Among the spring-grown onions in the United States, Georgia ranks first because Vidalia onions are predominantly grown in spring.

WEED MANAGEMENT
Weed management is among the costliest inputs in organic Vidalia onion production, with hand weeding being the primary form of weed control. Sole reliance on hand weeding is not sustainable due to cost and availability of labor.

Four herbicides derived from natural products have been systematically evaluated: clove oil, d-limonene, pelargonic acid and ammonium nonanoate. All are costly, prone to poor performance during the winter growing season, and marginally effective on cool-season weeds such as cutleaf evening primrose and swinecress. Given the marginal performance of natural product herbicides and extreme cost, these materials are not recommended in organic onion production.

Despite the proven benefits of cultivating organic onion with a tine weeder, there is a practical limit to weed control effectiveness. Cultivator performance is vulnerable to wet soils that delay the initial cultivation or impede implement operation. Weeds escaping control by cultivation were very large at the time of harvest and undoubtedly caused losses. It was hypothesized that a single (i.e., “once-over”) hand weeding to control weed escapes would be beneficial and cost-effective.

Trials were conducted from 2014 through 2017 at the Vidalia Onion and Vegetable Research Center near Lyons, Georgia. Cutleaf evening primrose was the predominant weed with densities ranging from 30 to 140 plants per square meter.

In 2014, the field site was not heavily infested with weeds, and cultivation using a tine weeder followed by a single hand weeding increased onion yields. Returns from the hand weeding investment averaged $2,360 per acre.

Based on these results, hand weeding used to supplement cultivation with a tine weeder in organic onion production is an economically viable option due to the high profit margin of the crop, limited weed control options in organic onion, and yield response from controlling the escapes. In locations with a history of intense weed pressure, the need for supplemental hand weeding should be anticipated due to the likelihood of numerous weed escapes. In this scenario, intense cultivation with a tine weeder supplemented by hand weeding to control escapes maximizes profits in this specialty crop.

THRIPS
Although thrips can be serious trouble for onion growers, there are many natural enemies of thrips in onion systems and readily available options for purchase. It’s largely unknown how current management to reduce thrips is impacting natural pest control. Reliance on insecticides is clearly not an option due to pesticide resistance developing around the world, and many chemicals will also harm natural enemies, which reduces biological control options and harms the environment by reducing biodiversity.

In addition, using chemistry such as lambda-cyhalothrin can actually cause even worse infestation levels of thrips in onion.

Research has shown some complementary insecticide approaches to help preserve biological control agents while controlling thrips. One recommendation from northwest Italy is the use of spinosad as an alternative to conventional agrochemistries for improved preservation of natural enemies while showing efficacy for thrips suppression.

From a systems approach, evidence is building that the use of cover crops and improving surface organic matter (such as crop residues from cover crops) improves both soil quality for production as well as aboveground and belowground pest control.

CENTER ROT
Center rot, a bacterial disease caused by Pantoea sp., has been a constant threat to onion production. The pathogen was first associated with center rot in Georgia in 1997. Since then, it has been spreading to different onion-growing regions in the United States.

The symptoms of center rot start with water-soaked lesions on foliage that run along the length of the leaf. The lesions may gradually turn necrotic and produce a blighted appearance with disease progression. In severe cases, infected plants may wilt, and foliage appears bleached.

P. ananatis can also invade the bulb tissue and cause bulb discoloration. The bacterial invasion can predispose bulbs to postharvest rot caused by the secondary microbes in storage. Under favorable conditions, yield losses to this disease may be as high as 100 percent.

The pathogen has multiple sources of inoculum where it survives or oversummers/overwinters between onion crops. Contaminated onion seeds can introduce the pathogen to onion fields. The pathogen is both seed-borne and seed-transmitted in onions. Under favorable conditions, P. ananatis can cause considerable economic losses.

P. ananatis can also be transmitted to onion by two known insect vectors, Frankliniella fusca (tobacco thrips) and Thrips tabaci (onion thrips). The mode of bacterial transmission was reported to be passive through contaminated thrips feces; however, it is still unclear if this phenomenon occurs in natural conditions.

Host resistance against this pathogen is not known. As a result, onion varieties with resistance/tolerance to P. ananatis have not been identified.

CONCLUSION
Overall, major constraints for conventional onion growers transitioning to organic production include lack of management options for weeds and diseases, including center rot, and limited understanding of biological control and natural enemies in the onion-center rot pathosystem.

Bhabesh Dutta is a plant pathologist and Jason Schmidt is an entomologist and biological control specialist at the University of Georgia in Tifton. Carroll Johnson is a weed scientist with the U.S. Department of Agriculture, also in Tifton.