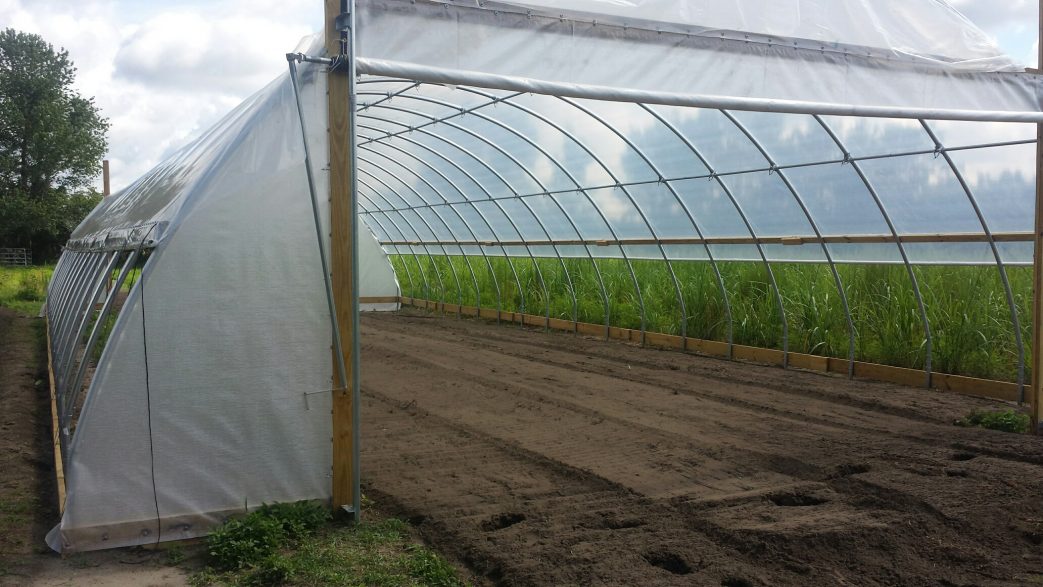 The Natural Resources Conservation Service (NRCS) has an initiative to assist growers with the installation of high tunnels in their production systems.

Monica Jones, a district conservationist with the NRCS in Florida, said the Environmental Quality Incentives Program (EQIP) offers a High Tunnel System Initiative to help growers with installing a high tunnel. The NRCS is an agency of the U.S. Department of Agriculture.

High tunnels have a wide range of benefits for growers, including extending the season, protecting crops from various environmental issues and improving plant health. “The high tunnels are pretty much used when sun or wind intensity could damage crops, so we try to provide this program so there can be a continuous growing season,” Jones said.

She has seen three different growers have high tunnels installed through the initiative during her time covering Alachua, Bradford and Union counties. These growers have production systems of various sizes.

According to the EQIP website, “Financial assistance covers part of the costs from implementing conservation practices.” Once a grower is far enough in the process to have an application reviewed, “Applications are ranked, and if yours is funded, NRCS will offer you an EQIP contract to receive financial assistance for the cost of implementing practices.” Jones said the amount given to growers changes annually.

HOW TO SIGN UP
If you are interested in getting a high tunnel through the initiative, Jones said the first step is to visit your local NRCS office to fill out an application. Following this, the grower must register with the Farm Service Agency if he or she has not done so already.

After these steps, if eligibility is met, the local district conservationist will review the requirements with the growers. There are certain requirements growers must meet in the high tunnel program, such as using the high tunnel kit provided by the NRCS and keeping the plants in the ground, Jones said. “Once that interest is there, we then present these items to the producer so they are aware prior to getting into the program that this is what we require,” she said.

The next step is a site inspection. Then, the NRCS will keep in contact with the grower to ensure expectations have been met with the program and the high tunnel.

Robin Bridges, a Louisiana producer, uses a high-tunnel system that was implemented through the NRCS. Bridges and his wife grow a variety of crops, including tomatoes, okra, squash, peppers, mustard and turnip greens, and kale. They had their high tunnel installed with their local district conservationist when the initiative first began.

“We had just wonderful cooperation and great results,” Bridges said.

A cooperative Extension agent for the University of Arkansas, Bridges said he decided to add the high tunnel because of the positive experiences he had seen with other growers using the system.

“When the opportunity came up to try to grow vegetable crops in a low-energy, protected system, my wife, in particular, was very excited about it, so I just supported her efforts,” Bridges said. BENEFITS OF HIGH-TUNNEL PRODUCTION
Specifically with tomatoes, Bridges said he has seen an extended season. “Like they say, you can plant earlier. You can grow later in the season because the temperature variations are not nearly as great under the protected high-tunnel system,” he said.

Growing okra under a high tunnel also has its benefits. Due to okra being a warm-season crop, Bridges said the high tunnel helps it produce from the end of tomato season until approximately the end of December.

Bridges has also seen some protection against disease. In his area, when the growers around him saw signs of early blight in their fields, he said he had another month without the disease because of the high tunnel. “We were able to get a lot more production from our plants before the early blight hit,” he said.

Weed management has also been made easier under the high tunnel. Bridges said this is because high tunnels are a controlled system, letting growers be more hands-on and allowing for more direct observation of the plants.

“You’re protected from the weather … so you’re not standing out in the rain trying to manage your crops, so that’s a big advantage,” Bridges said. “Same thing with the cold.”

He said the temperature inside and outside of the high tunnel has been up to 20 degrees different. “So if it’s 30 outside and freezing, it’s still 50 in the high tunnel on a sunny day,” he said.

Bridges said growers he works with that are now using high-tunnel production systems say they wish they would have started it long ago.