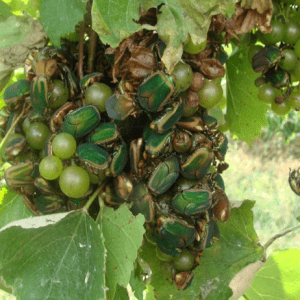 Adult beetles are attracted to the ripening grape clusters and fruits as the sugar content increases and fruit soften. Green June beetle populations vary from year to year. The damage caused to fruit crops ranges from negligible in some years to considerable in other years.

Adult Green June beetles are identified as ¾ to 1 inch long and ½ inch wide. Their color varies from dull brown with irregular stripes of green to a uniform velvet green. The margins of the body can range from light brown to orange yellow. The underside of the beetle is a metallic greenish or yellow.

The larva is a typical white grub, about 2 inches long when mature. The larva are easily distinguished by their habit of crawling on their backs. The larvae overwinter in the soil. Sandy soils high in humus or organic matter are preferred habitats. In the spring, Green June beetles tunnel near the surface. The beetles pupate in June. The adults emerge in July and August.