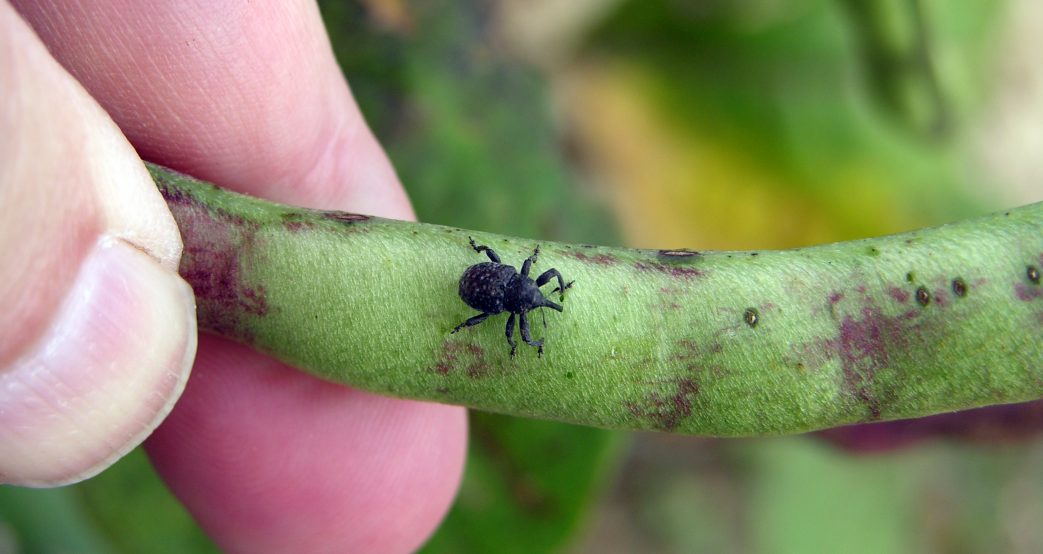 A big issue growers in the Southeast are facing is a weevil called cowpea curculio. This New World insect is very harsh on Old World peas, such as cowpeas.

Insects are typically controlled with an insecticide, but this particular weevil has become resistant to many insecticides and can devastate a crop. Cowpea curculio is so hard on the plant that it will knock off the flower buds and damage most of the peas.

David Riley, professor of entomology at the University of Georgia, has been looking at various ways to control the weevil. It was brought to his attention that a professor in Australia was working on another cowpea project in Africa.

The professor, T.J. Higgins, was concerned about another weevil that growers have been having severe problems with in Africa. Higgins noticed that the New World bean, Phaseolus vulgaris (snap bean or pinto bean), wasn’t affected by this weevil. He tracked the reason down to a gene called alpha-amylase inhibitor. Amylase is the enzyme used to digest starch. An inhibitor stops that normal enzyme from working, so it’s harder to digest.

New World beans are not as affected by weevils because the pests have a hard time digesting them. Higgins decided to take the alpha-amylase inhibitor gene from the New World bean and put it into the Old World bean (cowpea). His results from this genetically modified pea show reduced weevil damage.

Riley came across this research and thought maybe it would work with cowpea curculio. Last year, he went through the process of getting the permits to get the peas with the alpha-amylase inhibitor modification shipped over from Australia and eventually got the peas this past spring.

“In the first generation that we tested, we got a 71 percent reduction in weevil grub emergence, which is what we were looking for,” explains Riley. “That’s actually better than anything we would get with an insecticide spray. Just from that one gene, which is from something like a pinto bean, put into a black-eyed pea makes that black-eyed pea resistant to this weevil. That’s what we’re trying, and we’re in the second part of our testing now.”

The cowpea weevil over-winters as an adult, using its own fat preserves to survive. The weevil comes out in the spring and then goes into the fields to feed and lay its eggs. “My idea was, if you can take this GMO cowpea and have that be the first thing planted in the spring … the weevils will lay their eggs in that but the eggs won’t develop, potentially crashing the population,” states Riley. “Growers could plant any cowpea that they wanted after that. More specifically, I was thinking of using this GMO cowpea as a trap crop in the spring. That could allow you to grow any of the cowpea varieties you want after the initial planting.”