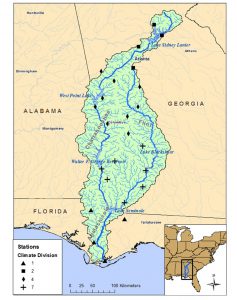 The Florida-Georgia water war has made it to the nation’s highest court due to a dispute about water conservation. The water war involves the Chattahoochee and Flint rivers. These rivers begin in Georgia, then join to form the Apalachicola River, which is near the Florida border and flows into the Apalachicola Bay.

Florida began the war by requesting limitations on Georgia’s fresh water use. Florida would like to revive its oyster industry, which requires plenty of fresh water.

Bryan Tolar, president of the Georgia Agribusiness Council, briefly touched on the water war during his presentation at the Southeast Regional Fruit and Vegetable Conference. Tolar seemed confused by Florida’s claims and said that Georgia is dedicated to water conservation.

“For Georgia, we have been focused on water conservation for agriculture for the last 20 years, and I know because I’ve been around for those 20 years,” he said.

According to Tolar, Georgia farmers are avid conservationists of land and water alike. “When it comes to the water war, it’s deeply offensive to our industry to feel like we have other states looking at us like we could do better, because I don’t think they understand just how well we’re doing,” he said.

Tolar discussed the Habitat Conservation Plan (HCP). “When you talk about environment protection, that is really where that initiative comes in,” he said.

The HCP would create a protocol for how the state would allocate water in cases such as extreme drought. Tolar said that he is aware that although agriculture needs enough water to stay productive, the environment, and the animals living in the environment, need the water as well.

“There’s a balance there. It’s not always perfect, but we have to look toward that,” Tolar said.

The Supreme Court has heard arguments from both states, but a decision has not been made.