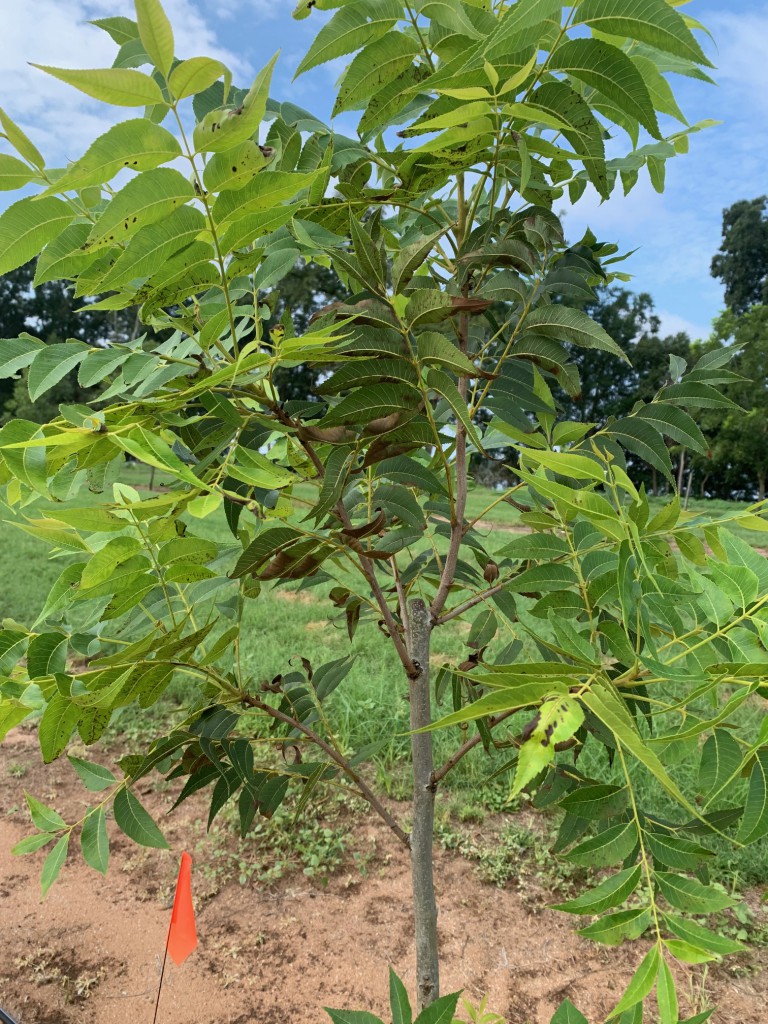 According to the University of Georgia Extension pecan blog, young trees are suffering leaf scorching related to heat stress.

While there are various components that cause leaf scorch, the main problem is that a factor is affecting the root or vascular system. Lateral roots and fibrous roots are susceptible to high temperatures and soil moisture. When air temperatures reach 100 degrees Fahrenheit, shallow roots begin to die. Soil temperatures are about five degrees warmer than air temperatures down to at least five inches.

This is why leaf scorching on young trees is prevalent when temperatures reach into the high 90s or 100s.

It’s natural for the trees to lose a few feeder roots, which will regrow when conditions are more favorable. Commercially managed trees depend on these fragile feeder roots, especially in young, vigorously growing trees, and when they are suddenly no longer there to pick up water for the tree, it shocks the tree. This leads to scorching. However, there should be no long-term damage and the trees will grow out of this as the canopies fill in and shade the root zone as the tree grows.

Older trees are experiencing terminal die back or Neofusicoccum. It is somewhat of a new problem that has been observed in orchards for the past 8 to 10 years. This normally occurs after long periods of rain and cloudy weather, which have been the case this summer.

The fungus causes leaf scorch symptoms that start from the edge of the compound leaf and moves backward. The entire compound leaf will eventually turn brown and present a similar appearance to fire blight. Terminal die back is a common name for it.

Once symptoms appear, it is too late to do anything. The Group 3 fungicides work well on this pathogen, but when it is raining as often as it has been in South Georgia, it can slip in, most likely when we rotate to Elast/Tin (neither of which work as well on Neofusicoccum).