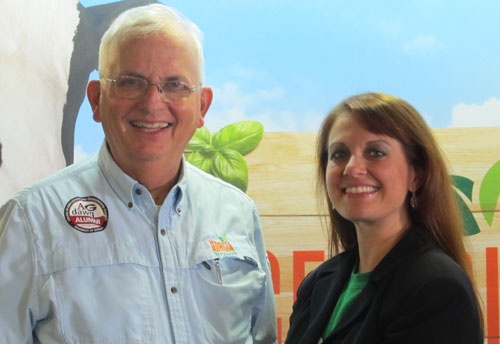 Consumers have been enjoying fresh, locally grown produce on their sandwiches at many of their local Subway restaurants this year. Subway and Georgia Grown announced early this past summer the partnership to promote Georgia Grown sandwich toppings in some of their restaurants. And Georgia Agriculture Commissioner Gary Black has been pleased with this promotion.

During last week’s Sunbelt Ag Expo in Moultrie, a special presentation took place talking about this partnership. Subway’s representative Stacy Kader said, “Subway does everything they can to get their produce locally sourced.” She said that a lot of their produce is sourced from Georgia. “Mainly the tomatoes, green bell peppers, and cucumbers. That produce is used to service stores in the Alabama, Georgia and Florida markets,” said Kader. Locally grown vegetables have been a goal of Subway’s to use as much as possible in the United States.

Commissioner Black said that Subway has joined Georgia Grown through a brand license agreement. “This promotional campaign exemplifies what the Georgia Grown program is and can be. The brand has the power to bridge that gap of what the consumers want and what the farmer is already offering – wholesome, local products produced right here in Georgia,” Black said.