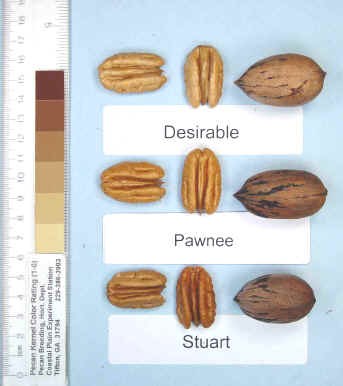 Some of Georgia’s pecan farmers will begin harvesting their crop during the week of Sept. 14, according to Lenny Wells, University of Georgia Cooperative Extension pecan specialist.

Wells estimates that the Pawnee pecan, which is typically the first variety harvested in Georgia every year, is on track to be picked sometime this week.

“We’re usually harvesting Pawnee towards the end of September. But the crop is a couple of weeks early this year. They’re about ready now,” Wells said. “We’re already seeing shuck split going pretty well. Next week, we expect harvest to begin on those.”

Once Pawnee pecans are harvested, there is normally about a three-week gap before other varieties are harvested. Wells said the Pawnee variety has been the most planted variety in the state since 2012.

“There’s a fair amount of it, but a lot of it is young plantings,” Wells said.

The ability to harvest and sell pecans early has been an attractive selling point for producers to grow the Pawnee variety.

“Usually the earlier varieties are going to bring a better price; the earlier you can get to market, that’s generally the case. Pawnee has always been the highest value nut just because of being the first one to market,” Wells said.

Wells estimates that pecan maturity is a couple of weeks early compared to previous seasons.

“Just because our bud break was so early this year because of the conditions we had over the winter and spring. We had an early bud break and things have all moved along at that pace that it started out with. So, we’re a couple of weeks early,” Wells said.