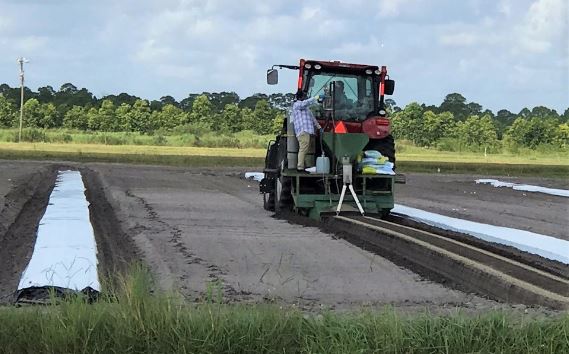 “I was going to have plastic laid and ready to go by Feb. 10 and be waiting on the plants. But with farming, the best laid plan isn’t always what it is,” said the Grady County grower.

What stopped this Georgia vegetable producer? How about a deluge of rainfall throughout February? That delayed Powe and other South Georgia farmers from laying plastic in preparation for the upcoming season. Some growers have also had to make a judgement call on whether to fumigate or not.

Why is Fumigation Important?

Fumigation protects crops from nematodes and other pests and diseases. The gas can linger under ground longer and prevent the plants from being put in the ground on time if the soil is too wet when fumigation is applied.

“Normally this time of year, 21 to 28 days is plenty. Normally, 21 days, it does what it’s supposed to do and gets out of there. But I’ve got some (plastic) that I’ve laid on Feb. 15, laid a little too wet and gas levels are still extremely high in those right now,” said Powe, who produces tomatoes, peppers, pickles, yellow squash, zucchini and half runner beans. “I chose (Tuesday) to lay a little bit and just have to leave the fumigant out just because the plants were ready. Here in Georgia, we’re on a very tight market window. Either we hit that market, or it’s gone.”

Powe would rather hit the market with potentially reduced yields compared to hitting it with maximum yields but have no one to sell to.

“It’s kind of a two-edge sword where you get cut on both sides. I guess the best way for me to say it is, if I had put gas out and make 3,000 boxes to the acre and it got here July 4, nobody’s going to be in the market for Georgia pepper on July 4. I made the decision to get 1,600, 1,800 boxes of pepper in the right time slot,” Powe said.