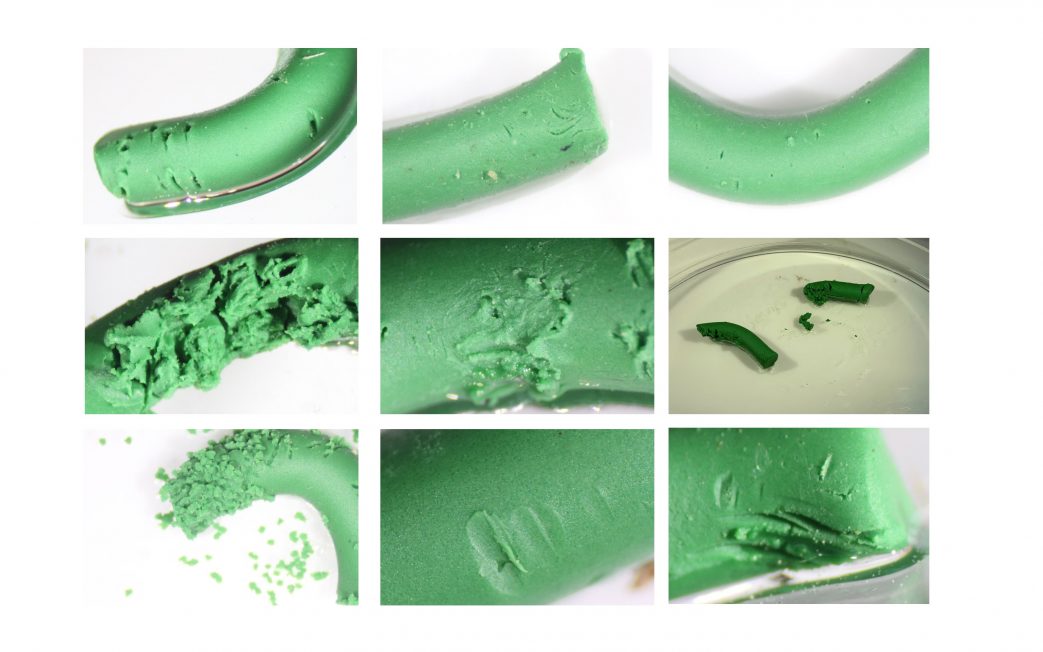 By Allison Fortner for CAES News

In a recently published article in Entomologia Experimentalis et Applicata, UGA scientists determined that beneficial predator insects will interact with and leave distinct markings on clay models that resemble their prey, in this case the larvae of turfgrass pests. This study was led by entomology doctoral candidate Fawad Khan under the guidance of Assistant Professor Shimat Joseph in the College of Agricultural and Environmental Sciences on the UGA Griffin campus.

“We want to know who the predators are and what kind of impressions these predators will create on these clay models. Before we do anything in the field, we need to have a sense of what that looks like,” said Joseph, a turfgrass entomologist.

Though the clay model approach has been used in other disciplines to observe predator activity, Joseph and Khan found no previous use of the method in turfgrass research. This study developed clay models as a tool to aid in future research.

“It’s kind of brain hack of the predator. We want to see how much the real predator interacts with the model based only on the visual cues,” said Khan, a Fulbright scholar who came to UGA to study eco-friendly pest management options, specifically beneficial insects.

The Need for Research

The turfgrass industry contributes $9 billion to Georgia’s economy each year, but one of the high costs is pest management. Joseph said that the use of insecticides not only cuts into grower profits but requires valuable time, labor and equipment. The use of biological controls, such as natural predator insects, could mean only using chemical management when pest numbers rise beyond a certain threshold.

Harmful pests such as fall armyworms cause problems for turf growers and homeowners alike. Though there are natural predators that attack pests in their larval stage, it’s difficult to study the activity since they leave little evidence. The goal of Khan and Joseph’s research was to identify predator interactions and use that knowledge in commercial and residential turf. But before they could do so, they needed a method to measure how predators interacted with their prey.

In this study, researchers created two sizes of simulated larvae from modeling clay. Then they collected natural predators from turf lawns at UGA-Griffin. Each collected arthropod spent 48 hours in a petri dish with two sizes of clay larvae models. This was enough time for them to make their marks. Because the clay stays soft at room temperature, any markings left by the predators were preserved.

Researchers used video equipment to observe how the predators would first interact with models in the field. Outside of the petri dish controlled environment, they also placed the clay models near a fire ant mound in turfgrass. The study found different types of predators left behind distinct markings.

The researchers characterized and named the impressions left by each type of arthropod and used the knowledge of the specific markings as a tool to study the activities of these insects in the field.

“(The clay method) is good and it’s also cost-effective because it does not use a lot of expenditures like cameras or heavy equipment. You just have to put the clay models on the trees and near the turfgrass. After one or two days you see there are different markings and some activity there,” Khan said.

Because this study used a new method for measuring predator activity in turf, it created a baseline tool for further research as part of Khan’s dissertation work. The next step in the research is to compare predator activity between different systems.

“For that research, we need to identify the marks in the real field conditions of the sod farms and the residential lawns. If we did not have the baseline research on the turfgrass system, we couldn’t do that,” Khan said.

The goal in tracking predator activity between the systems is to create integrated pest management (IPM) methods against harmful insects such as fall armyworms. The clay model system will allow researchers to know which predators are present in commercial and residential situations. With that knowledge, Joseph said that they hope to manipulate existing predator insects to serve as a control method for the pests.

“In IPM, we tend to use multiple tactics. Pesticide is an important tactic, but there are others, like biological control,” Joseph said. “My viewpoint is more conservation. Here we are looking at biological control so we can … develop a population of predators and beneficial insects. When the fall armyworm attacks, (predators) can provide the first layer of control. If the population is overwhelming, we have to come up with a remedy. Chemical management comes into play if the numbers go beyond a certain threshold.”

Khan said the ecosystem-based approach of IPM considers beneficial insects including predators, parasites and pollinators, the environment, costs, economic loss and other factors surrounding any crop. However, this approach is not just important for those in the commercial agricultural sector. One of Khan’s ultimate research goals is to help homeowners know more about what is happening in their lawns.

“We have to appreciate the natural enemies and biological control that is happening around us in our residential lawns. My research will be giving an estimation technique to see what good insects are active,” Khan said.

For more information on the UGA Department of Entomology, visit ent.uga.edu.