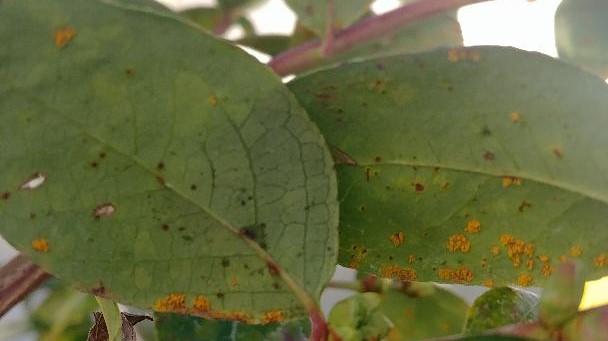 In 2020, mild winter conditions followed by a wet spring contributed to the development of significant disease issues on Georgia blueberries. Among other issues, growers faced difficulties with preharvest and postharvest fruit rots and continuing problems with spring blueberry leaf rust epidemics.

During the 2020 growing season, Georgia blueberry growers faced challenges from fruit rots including ripe rot caused by the fungi Colletotrichum gloeosporioides and C. acutatum. Development of ripe rot (also called anthracnose fruit rot) is favored by warm, wet conditions. Fungal infection can occur from bloom up until harvest, though symptoms do not typically appear until fruit begin to ripen.

The spores of the fungus that cause ripe rot can easily spread from berry to berry via rain splash, in packing lines or in clamshells. Typically, field applications of QoI (strobilurin) fungicides such as Abound (azoxystrobin), Pristine (pryaclostrobin + boscalid) and Quilt Xcel (azoxystrobin + propiconazole) provide excellent ripe rot control. However, in recent years, C. gloeosporioides isolates from blueberry with resistance to QoI fungicides have been identified in Georgia and elsewhere in the southeastern United States.

To provide growers with needed information regarding alternative fungicides for ripe rot management, the UGA-Tifton Fruit Pathology Laboratory and UGA Cooperative Extension personnel conducted trials during 2020 to evaluate fungicidal spray programs for control of ripe rot and other fruit rot disease issues. In these trials, spray programs which incorporated applications of Switch (cyprodinil + fludioxonil), Captan (captan), Miravis Prime (pydiflumetofen + fludioxonil), Omega (fluazinam) and Ziram (ziram) were the most effective at reducing fruit rots in general and ripe rot in particular.

To manage ripe rot, applications of effective fungicides beginning at early bloom and continuing every seven to 14 days through preharvest are recommended. Growers are reminded that rotations of the available modes of action (and/or tank mixes with multi-site products such as captan) are encouraged to reduce the chances of continued fungicide resistance development in the pathogen population.

In addition, when developing a spray program for fruit rots, growers should be aware of the preharvest interval (PHI) of these products, including Ziram (which should not be used more than three weeks after full bloom), Omega (which should not be used within 30 days of harvest) and Quilt Xcel (also a 30-day PHI). Consult the various labels for rates, recommendations and precautions.

Blueberry leaf rust (caused by the fungus Pucciniastrum vaccinii) is most frequently associated with causing leaf spots and premature defoliation after harvest. However, Georgia blueberry growers have also experienced significant spring epidemics of leaf rust in recent years that can directly impact developing fruit. These spring epidemics are likely the result of increasingly mild winters that allow blueberry leaves infected during the previous season to persist through the winter and serve as sources for disease spread early in the subsequent season.

Recent trial work carried out by the UGA-Tifton Fruit Pathology Laboratory reinforces the importance of spring fungicide applications for leaf rust management. Applications of effective demethylation inhibitor (DMI) fungicides during the spring were found to significantly decrease the development of leaf rust throughout the growing season. Two spring applications of Proline (prothioconazole) were capable of controlling leaf rust and measurably reduced disease throughout the full season, regardless of whether effective fungicides were used after harvest.