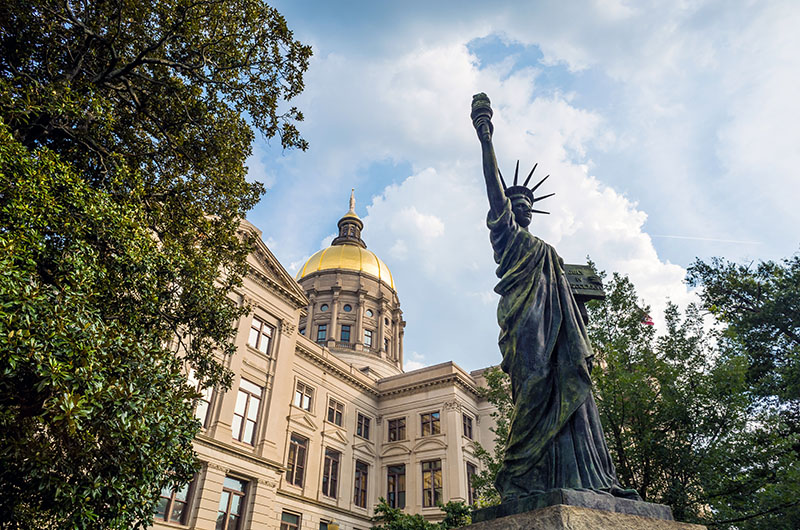 It’s a surreal moment in Georgia politics as two years of policy work hangs in the balance after lawmakers pressed the pause button on the 2020 legislative session due to the coronavirus pandemic. Before turning our full attention to working with state and federal leaders to navigate through the heath crisis, the Georgia Agribusiness Council (GAC) was actively engaged with legislators. Several bills of importance were still in play when things came to a halt.

Much of the early talk in the Capitol centered on Georgia’s budget as Gov. Brian Kemp called for across-the-board cuts to government agencies and programs. Debate was intense behind the scenes as everyone fought for their piece of the budget pie. Led by Chairman Terry England in the House and the late Senator Jack Hill in the Senate, Georgia agriculture fared relatively well. We were pleased to see many areas of importance, such as the department of ag and University of Georgia Extension specialists, saved from the deep cuts that first seemed imminent at the beginning of the session.

Many of the budget discussions are now irrelevant with lawmakers presented with a completely different scenario for budgeting for the 2021 fiscal year after a shutdown of the state and national economies.

After flying through the Georgia House of Representatives during the 2019 session, the Georgia Right to Farm Act (HB 545) remained tabled in the Senate as lawmakers continued to be badgered with misinformation from several environmental activist groups. The Right to Farm Act would provide added protections for Georgia’s farmers against frivolous “nuisance” lawsuits and would provide these protections evenly across all segments of agriculture, including fruits and vegetables.

This bill is vitally important to close loopholes in our current law and is supported by Gov. Kemp and leaders from both the House and Senate. If and when lawmakers resume the 2020 session, the final vote will be extremely close.

HB 105 by Rep. Sam Watson, a South Georgia produce and cattle farmer, would exempt Hurricane Michael disaster payments from state income taxes. The bill passed through the House in 2019 and passed through the Senate shortly before crossover day. The main sections of the bill exempt payments from the U.S. Department of Agriculture (USDA) directly related to Hurricane Michael from state income taxes.

However, lawmakers in the Senate used the bill as a vehicle and attached additional language that deals with the taxation of ride share services in Georgia. While we often use Uber and other ride-sharing platforms to get around Atlanta during the legislative session, we focused our support on the portions of the bill that will have real impacts on agribusiness in Georgia. This bill moved far enough prior to the shutdown to make its way to the governor’s desk for final signature.

Georgia’s hemp program was a hot topic all year and lived up to the hype during the session. We worked to ensure loopholes in Georgia’s laws were removed and also worked to secure much needed funding for the program to be properly administered. This legislation primarily focuses on five key changes to last year’s legislation that was signed into law. These changes include:

The department of ag has already begun working with hemp growers and processors, and we are excited to see if this new crop option will provide a boost to agribusiness in the state like it has been touted to do.

A bill by Rep. Houston Gaines that now has added significance is HB 882, which would extend tax exemptions for food banks. This bill would eliminate the sunset period for the exemption from state and certain local sales taxes for the sale of food to qualified food banks. It would also expand the exemption for the use of food donated to qualified nonprofit agencies to include disaster relief. With food banks playing a large role in the coronavirus relief efforts, we hope that this bill will be considered in the Senate as soon as lawmakers return to conclude the session.

HB 690, by Rep. James Burchett, passed the House with a vote of 169-1. This bill aims to exempt agribusinesses from having to pay full permit and inspection fees on agriculture buildings and structures. While the bill will still require these structures to get inspected and permitted, the fees for these services will be capped at $500.

The bill will only apply to those producers who qualify for a GATE (Georgia Agriculture Tax Exemption) card through the Georgia Department of Agriculture. The structures that qualify for this legislation must be used directly for the commercial production or processing of agriculture commodities and will also include farm labor camps and housing for migrant workers.

Dozens of other bills that have impacts on Georgia’s specialty crop industry have seen action throughout the session. We have no way of knowing when lawmakers will return to complete the 2020 legislative session, but GAC will be there when they do. We will continue to advocate relentlessly for the best interests and priorities of Georgia agriculture.

Will Bentley is president of the Georgia Agribusiness Council.