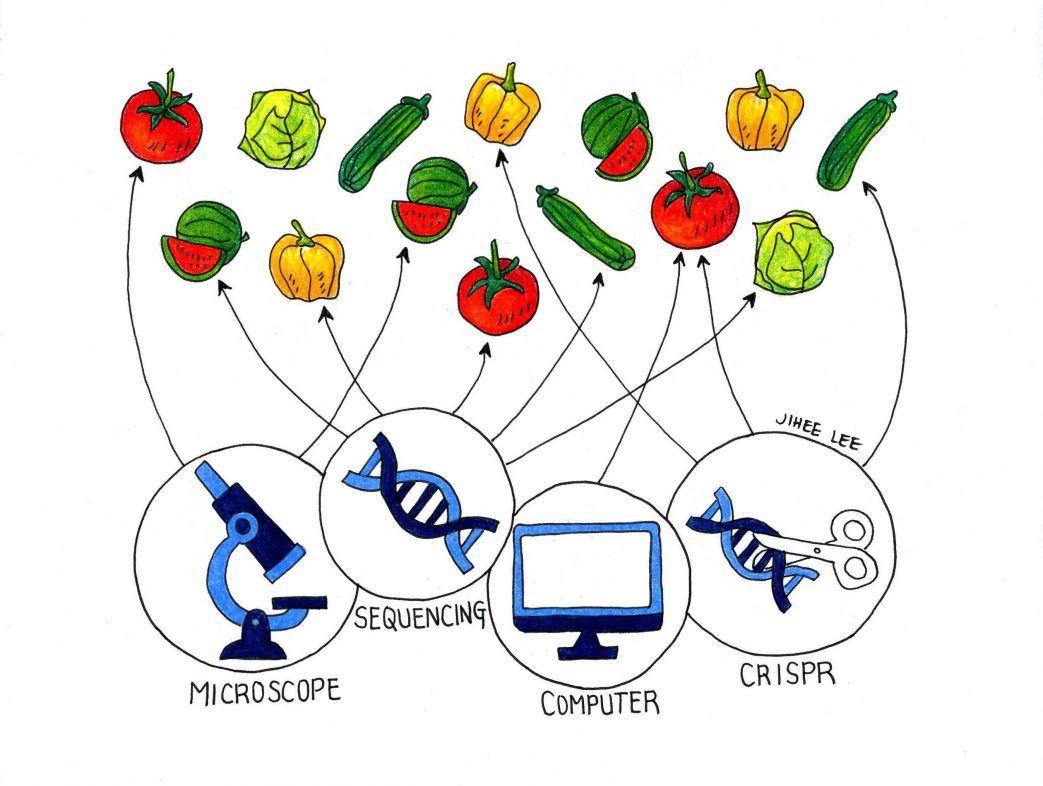 GENES VS. GENOMES
Genomic technologies are defined as technologies used to analyze or manipulate genomic information. They therefore include technologies that utilize the information in the genome. What is a genome? Since the early 1900s, there has been variability in the concept of the genome. While a gene is regarded as a segment of DNA that can contribute to characteristics (e.g., disease resistance or fruit color), it is now generally accepted that a genome is a collection of genes in an organism (e.g., plant, animal or human).

Interestingly, genomes come in all sizes and levels of complexity. For example, scientists revealed that a tomato has approximately 35,000 genes in its genome, while humans have approximately 21,000 genes. Advances in understanding the collection of genes (genome) in an organism are undoubtedly a powerful way of making a real impact in crop breeding and improvement. In fact, two key genomic technologies — whole-genome sequencing and CRISPR — have already made it possible.

CRISPR genome editing is another example of key technology using genomic data in crop-breeding applications. This contemporary genomic tool can deliver a trait of interest into an organism in the laboratory. CRISPR has a proven ability to precisely change the DNA sequence of a gene. This ability is the main advantage of CRISPR over conventional crossing methods of breeding.

The primary goals of crop breeding are aimed at improving traits of commercial value. The introgression of one or a few genes (traits) into a current elite breeding line (or variety) is a common plant breeding practice. To this end, breeders often use crossing methods. However, the introgression of new gene(s) via conventional crossing requires significant time and expense. In some cases, it is becoming nearly impossible for such crossing to satisfy the demands of the market in a timely manner.

How can genomic technologies positively impact the breeding paradigm for breeders trying to introgress a target gene? Lacking a complete genome sequence, breeders have made high-yielding, marketable varieties through generations of crossing and selection, but this is a tough task that takes time and sometimes luck. More recently, however, with the aid of whole-genome sequencing technology and CRISPR, scientists have generated tomato plants with disease resistance in less than 10 months.

How was this accomplished? The beauty of CRISPR is that scientists can directly implement it in an elite or locally adapted germplasm (i.e., living tissue from which new plants can be grown) with relatively minimal effort and investment. However, a major limitation of the current CRISPR method is that it can target specific gene locations, which are inevitably based on whole-genome-scale sequence information. Better information is required to prevent unwanted changes to similar or other DNA sequences, in addition to the sequence of interest. Therefore, a better understanding of genome information is crucial.

Tong Geon Lee is an assistant professor at the University of Florida Institute of Food and Agricultural Sciences Gulf Coast Research and Education Center in Wimauma.