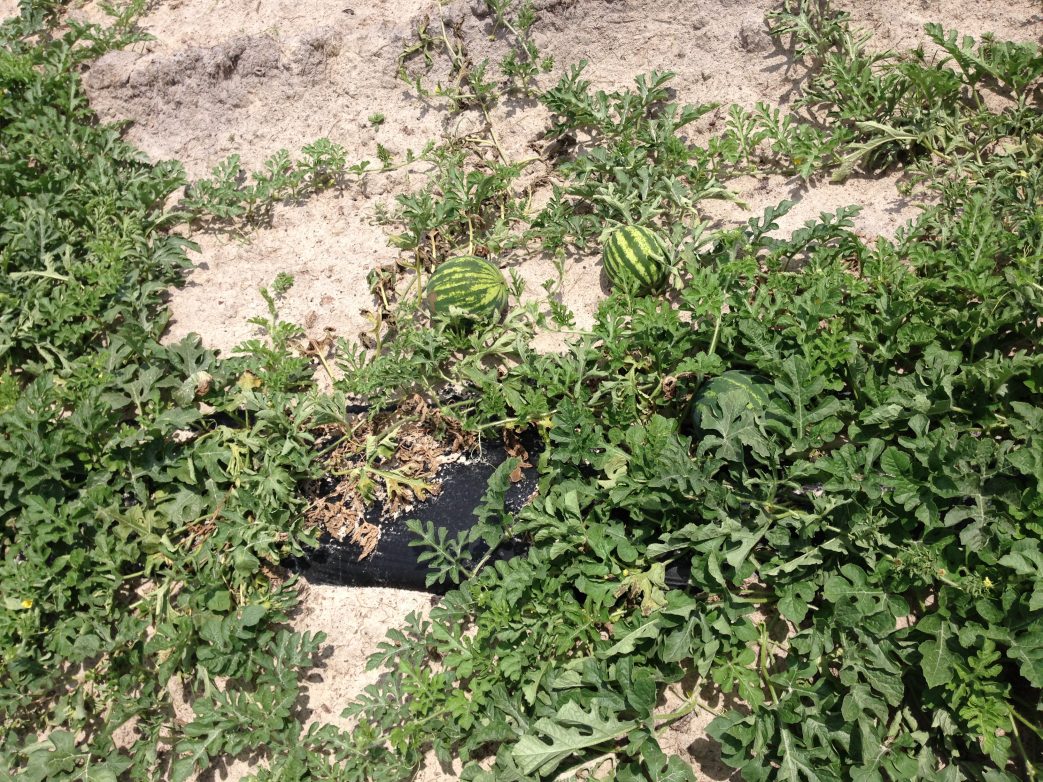 Multiple vines have collapsed, exposing the fruit, which leads to sunburn.

Fusarium wilt is not a new problem, but it’s a more prevalent problem now than it previously was.

Once fusarium becomes established in the soil, it’s very long lived. Fusarium wilt has been a main area of research for the past 10 years for the National Watermelon Association.

Josh Freeman, associate professor of horticultural sciences at the University of Florida Institute of Food and Agricultural Sciences North Florida Research and Education Center, has been collaborating with the University of Georgia (UGA) to study the effect of fumigation on fusarium wilt incidence.

“We have a new race of fusarium in the Southeast, which we call race 3,” explains Freeman. “It’s more aggressive, and we don’t have resistance. That’s the biggest problem, there’s no resistance to fusarium wilt in seedless watermelons.”

There aren’t many management options for growers. The use of grafting is one, but it is expensive. A standard seedless plant might be 25 to 30 cents; a grafted plant is close to a dollar.

“We are working on a standard practice of soil fumigation,” says Freeman. “We took one of our standard fumigants, Pic-Clor 60, and applied it under a highly retentive film called totally impermeable film.”

Despite the positive results, Freeman says growers don’t want to spend the money on totally impermeable film because it’s more expensive. “Ten percent is generally what the cost differential is between low-density film, which is standard to the watermelon industry,” he explains.

This research has only been going on for one year, but Freeman received more funding to continue the work next year. He plans to look at ways to try to cut the cost down for the grower by increasing bed height. “This industry normally uses short beds 2 to 4 inches tall. We think at least 8 inches is going to be needed,” says Freeman. “There will be some equipment changes that are going to need to be adopted, but this seems to be something that may be a sustainable solution.”

Freeman hopes to expand the fusarium wilt research project, in collaboration with UGA, with a federal grant. “Once we get another year of data, we’ll have a suitable solution. I think it will be an economical, sustainable solution that’ll be suitable for the watermelon industry,” he concludes.