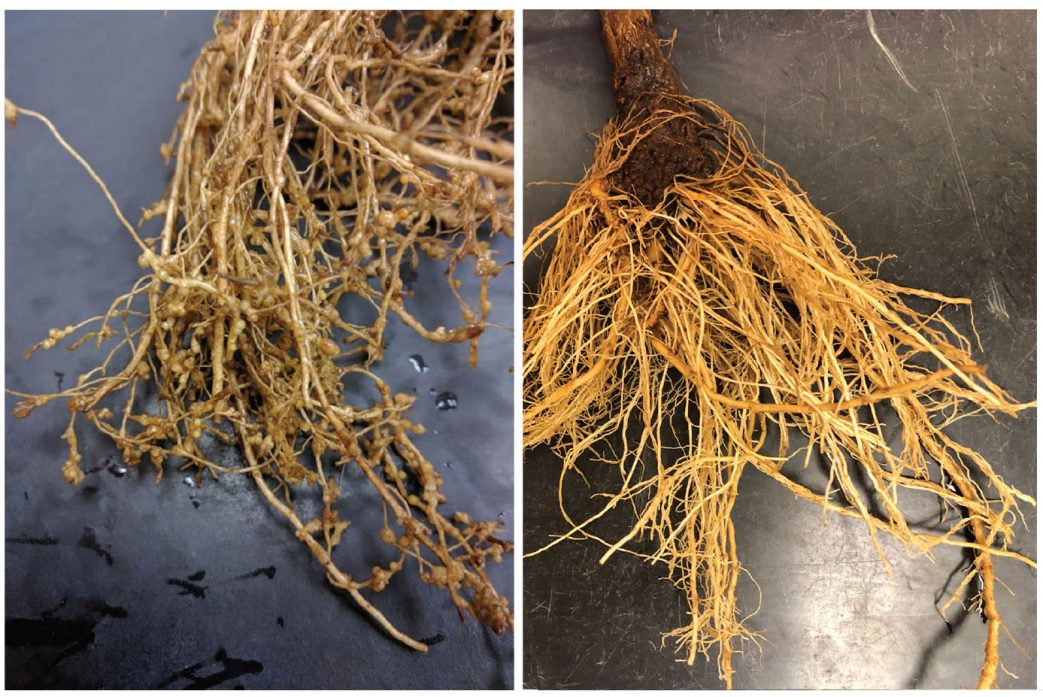 By Abolfazl Hajihassani and Chinaza Nnamdi

The majority of vegetable production in Georgia is located in multiple counties in the southern region of the state. Vegetables are grown year-round on both raised beds covered with polyethylene plastic mulch and on bare ground.

Using a comprehensive survey conducted in 2018, we have documented that root-knot nematodes, Meloidogyne spp., are the No. 1 nematode pest in vegetable crops in Georgia, infecting 67 percent of the fields surveyed. Therefore, proper management practices need to be developed or optimized for successful control.

Chemical control is currently the best option for managing nematodes in vegetable-producing systems. Optimizing chemical control methods is a must for vegetable growers in the Southeast. Growers often fumigate the soil prior to planting the first crop in the spring or in the fall, but the issue with root-knot nematodes is particularly important in the second, third or fourth crop grown on the same plastic mulch. Reusing mulch favors nematode buildup in coarse-textured soils.

Results showed that all soil fumigants and the resistant cultivar reduced root galling compared to the untreated check at harvest. Pic-Clor 60 had numerically better control of root galling compared to the other fumigants. At the end of the season, second-stage juveniles of the nematode in the soil were only lower than the untreated check in the resistant pepper treatment. Among the fumigant treatments, Paladin had numerically lower nematode numbers in comparison with the other fumigants. We also found that Pic-Clor 60 and the resistant cultivar had the highest and lowest pepper fruit yield, respectively.

Based on our data, treatments with Dominus and the resistant variety had the highest weed density. Plots treated with Pic-Clor 60 had the lowest weed density. There was no difference in weed density among Paladin, Telone II and the untreated check. The weed population in the Dominus treatment was higher than the check plot. Soil fumigation with Pic-Clor 60 reduced southern blight disease, caused by the fungus Athelia rolfsii, as compared to other treatments.

Paladin, though effective in suppressing nematode juveniles in the soil, was withdrawn from the market in 2019, further restricting the already limited number of tools for managing nematodes. Pic-Clor 60 is likely an ideal fumigantfor control of root-knot nematodes and other soilborne pathogens in multi-cropping systems of vegetables. However, root-knot nematode population densities in plots treated with Pic-Clor 60 were increased by the end of the growing season. This may suggest that combined use of fumigants and post-plant nematicides through drip irrigation could provide enough root protection against high densities of root-knot nematodes in the first and subsequent crops grown on the same plastic mulch.

In collaboration with county Extension agents, two on-farm trials are currently being conducted in Brooks and Lowndes counties in Georgia. The objective is to examine whether the combined application of both fumigant and non-fumigant nematicides in the first crop can result in a more effective control of root-knot nematodes and higher crop yield, compared to the use of only fumigants in the first crop and only non-fumigant nematicides in the second crop grown on the same plastic mulch.