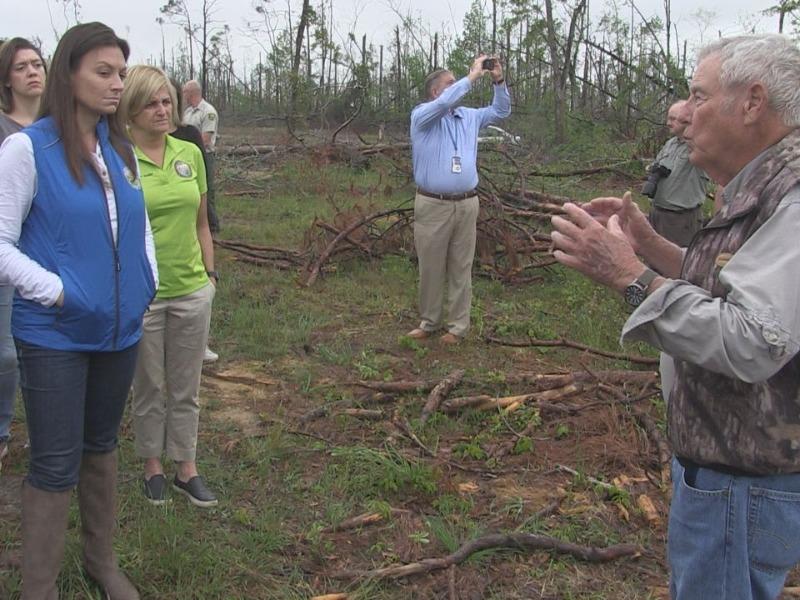 Florida Agriculture Commissioner Nikki Fried continued Friday to push for state and federal hurricane relief for the Panhandle as she led a bipartisan group of lawmakers and staff members through rural communities still struggling from deadly Hurricane Michael.

Saying farmers are “suffering,” Fried said the trip to see Calhoun County timber land, where decades-old slash pines reaching maturity were wiped out in a single day by the October storm, was intended to deliver a message about the need for state lawmakers to meet her agency’s request for $39 million in storm-related funding.

A major priority in the region is helping growers remove downed trees so they can replant and prepare for anticipated wildfires.

“I’m hoping that as more and more leaders come out here and see the devastation, they’ll continue to make that an emphasis on this year’s budget,” said Fried, who noted House and Senate spending plans are short of her request.

The Oct. 10 storm, which made landfall in Mexico Beach as a Category 4 hurricane, caused massive damage to Northwest Florida’s vital timber industry and other types of farms.

“For the first couple months afterward, everybody was taking all of the supplies and diapers and water and food. Then it all stopped, and everybody went back to their normal lives,” said Fried, who spent three days last week in Washington, D.C., to lobby on behalf of farmers and to ensure timber is listed as a crop in any relief package. “I do think that unless you are seeing this and hearing about this on a constant basis, there has been a forgotten area.”

Calhoun County timber farmer Jimmy Suggs, whose family has been growing trees and raising cattle since the 1930s, helped drive home Fried’s argument about the need for Congress to provide relief. Suggs faces the possibility of having to give up the land.

“I don’t know what the future holds. I don’t know if the family will be able to keep the line together or not,” Suggs said in the middle of an 820-acre parcel where the remains of trees continue to litter the fields. “I’ve cut my last load of timber in my lifetime. I don’t have enough time left to grow anymore, but I hope something will materialize so that my children and grandchildren can.”

He estimated that it will cost about $2,000 an acre to clear the land, money he had anticipated from the sales of trees that are now splintered across his fields.

“We don’t have any timber to sell to pay for that,” Suggs said. “My pockets just aren’t that deep, and neither are many other people in this area. They just can’t afford it. I don’t know what we’ll do.”

Hurricane Michael created an estimated 72 million tons of debris from the Gulf Coast to the Georgia border, with most of the debris still on the ground and serving as a potential fuel for wildfires as land dries.

Fried said the debris has limited mobility for firefighters, playing a major part in a 668-acre fire in Bay County that took a week to fully contain. Officials said the fire likely would have been limited to several acres before Michael caused the debris.

The state has spent about $1.6 billion responding to the storm, most of which officials anticipate will be reimbursed by the federal government.

The state Senate budget plan, which includes about $4 million for wildfire suppression equipment, has about $220 million in overall hurricane funding.

State Rep. Rick Roth, a Loxahatchee Republican who for three decades owned Roth Farms in Palm Beach County, said during Friday’s trip to Clarksville that it’s important for the Legislature to “step forward.”

“It’s really a cash-flow problem for agriculture,” Roth said. “They need dollars now to be able to start planting their next crop. Now is the time, April, when they’re planting peanuts and cotton and other crops.”

Rep. Loranne Ausley, D-Tallahassee, said “the least” the Legislature needed to do was match a relief package lawmakers crafted after Hurricane Irma, which impacted a far-broader part of the state in 2017.