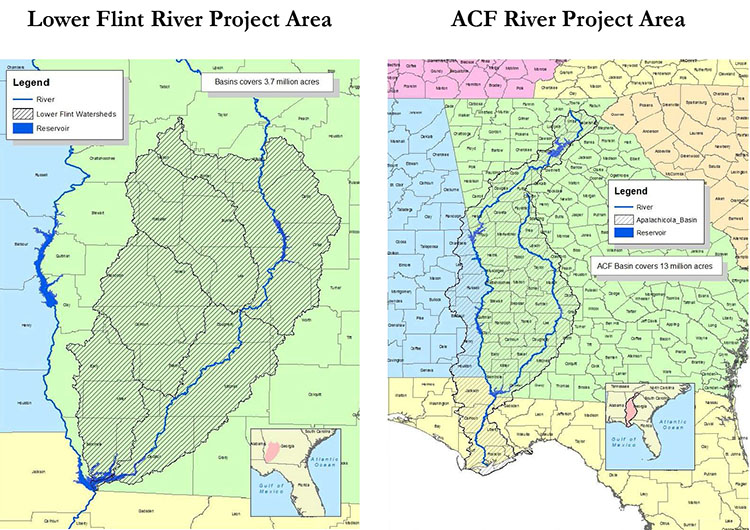 (NSF) — For years, Florida has blamed Georgia’s water use for causing damage to the economically vital oyster industry in Apalachicola Bay.

But a special master appointed by the U.S. Supreme Court disagreed this week, dealing a major blow to Florida in its legal fight to force Georgia to share more water in a river system that links the two states.

The special master, Senior U.S. Circuit Court of Appeals Judge Paul J. Kelly, issued an 81-page report Wednesday that said mismanagement by Florida contributed to the oyster industry’s collapse and that Florida has not adequately shown that Georgia’s water use caused problems in the Franklin County bay and the Apalachicola River.

“Georgia does not contest that the oyster fishery suffered significant harm; rather, it argues that the collapse resulted from Florida’s mismanagement, and insofar as low flows caused the collapse, those low flows were predominantly caused by drought, not Georgia’s consumptive use,” Kelly wrote. “I agree and conclude that Florida has not shown by clear and convincing evidence that the harms in the Bay resulted from Georgia’s consumption.”

Kelly pointed, for example, to a decision by Florida to lift oyster harvesting restrictions after the 2010 Deepwater Horizon oil disaster caused fears of contamination in the bay. Kelly wrote that such decisions led to overharvesting of oysters and that drought also played a role in the problems.

Florida filed the lawsuit against Georgia in 2013, though battles about water in the Apalachicola-Chattahoochee-Flint river system date to the 1990s.

“I conclude that low flows played some role in the oyster population decline of 2012. Nevertheless, … I conclude that Florida’s management was a more significant cause of the decline,” Kelly wrote.

Kelly’s report will go to the U.S. Supreme Court, which will make a final decision in the case. It drew criticism Thursday from Florida Agriculture Commissioner Nikki Fried.

“(The) ruling is a major disappointment for fair, responsible water usage on which both states depend,” Fried said in a prepared statement. “Georgia’s unchecked disruption of our shared waters in the Apalachicola River has devastated Florida’s oyster industry. I’m encouraging our state agencies to continue fighting to hold Georgia accountable for its water use, and to explore all legal options.”

Kelly, who is based in New Mexico, was appointed special master after a divided U.S. Supreme Court last year overturned a 2017 recommendation by another special master, Ralph Lancaster, who said Florida had not proven its case “by clear and convincing evidence” that imposing a cap on Georgia’s water use would benefit the Apalachicola River.

Kelly held a hearing last month in the case, which has focused in part on water used by Georgia farmers.

Key issues have included whether Florida is entitled to an “equitable apportionment” of water and whether the potential benefits would outweigh the harms. In a brief filed in January, Florida said it was seeking to cap Georgia’s consumptive use of water from the system at current levels until at least 2050, with the cap reduced during drought years.

“On the benefits side, a decree capping Georgia’s consumption would significantly increase the flow of water into the Apalachicola and restore the conditions in which the region survived and thrived for centuries,” Florida’s attorneys wrote. “And on the costs side, much of this reduction in consumption could be accomplished simply by halting wasteful irrigation practices and sensibly limiting future irrigation in ways Georgia officials have themselves proposed and other states (including Florida) have long implemented. The profound impacts of destroying a treasured ecosystem and natural resources that Florida, the federal government, and others have long sought to protect, and permanently altering the lives and livelihoods of the communities who rely upon these resources, clearly outweigh such costs.”

But Georgia attorneys argued in a January brief that Florida’s proposed cap on water usage would impose “enormous costs” on Georgia without “producing any material benefit to Florida.”

“Florida’s proposed cap would cost Georgia hundreds of millions — if not billions — of dollars,” the Georgia brief said. “At the same time, that cap would result in no meaningful benefits to Florida. Indeed, the costs the cap would impose on Georgia exceed the entire value of the industries and economies that Florida alleges have been harmed in this case — let alone any incremental benefits the cap might provide those industries.”

Kelly agreed with Georgia’s position on the potential benefits and harms of placing limits on its water use.

Read Commissioner “Nikki” Fried’s comments as well as the decision handed down by the court in this ruling.