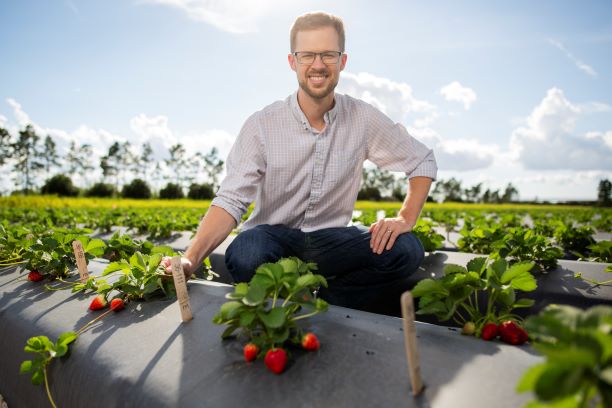 Cold temperatures this week in Florida were just what the doctor ordered for the state’s strawberry crop – especially since temperatures were not well below freezing.

Vance Whitaker, strawberry breeder at the University of Florida Gulf Coast Research and Education Center, said the cold weather Floridians experienced this week should aid in the development of the strawberry plants.

“If it gets nice and cold for a few nights, but without freezing, that’s great. It sweetens them up and firms them up. We’ve had pretty warm weather up to now. This is definitely a nice change,” Whitaker said.

An estimated 10,000 acres of strawberries were planted this year. Florida is the country’s second largest producer of strawberries behind California. Whitaker likes how the strawberry plants are faring so far, though this year’s crop is still in its early stages.

“Everything’s looking very good in general. The transplant quality coming in was good. I’ve seen a lot of pretty fields, good stands of plants. I would say it’s been a great start,” Whitaker said.

There is somewhat concern about Neopestalotiopsis disease which has also been confirmed in Georgia strawberries. It is a disease Florida producers are familiar with.

“There is some (disease) around. Thankfully, it hasn’t been a super wet season so far, outside of that tropical storm (Eta). When that came through, those wet days got a little bit of that disease started,” Whitaker said.

“It’s definitely something the growers are worried about. But it’s not something that’s like an epidemic yet. They’re also much more familiar with what it is being such a new thing it is, than they were the last couple of years. I think they’ve got a lot more perspective on how to handle it than they did before as well.”