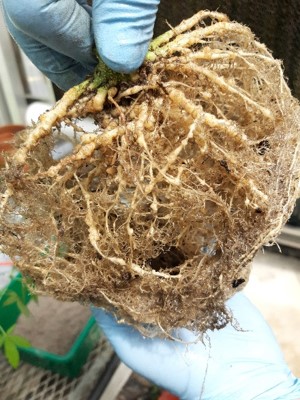 The long-term sustainability of producing hemp in Florida is still being researched. What is certain is that if growers hope to produce hemp in the Sunshine State, they’ll have to overcome nematodes.

It is not a surprise to Johan Desaeger, Assistant Professor of Entomology and Nematology at the UF Gulf Coast Research and Education Center.

“What we noticed is, and it’s not surprising, it’s root-knot nematode. We find root-knot on most crops in Florida, so finding it on hemp was hardly a big surprise. It’s certainly something that if people that want to grow hemp in Florida, it’s something they should keep in mind,” Desaeger said. “I feel that any new crop we bring into the state, nematodes should be one of the things that at least we’ll be looking into, if it’s a problem or not.”

Nematodes have a wide host range and are most prevalent in Florida, due to its warm climate and sandy soils. Root-knot nematodes enter the roots of plants, move through its cells until they reach sites where they grow, produce additional eggs and cause the roots to swell. This reduces the plant’s growth and any potential yield.

According to UF/IFAS News, though all hemp cultivars were found to be good hosts for root-knot nematodes, some cultivars, such as Cherry Blossom, showed less root damage. However, more research is needed, Desaeger said.

Sting nematodes did not reproduce well on most hemp cultivars.