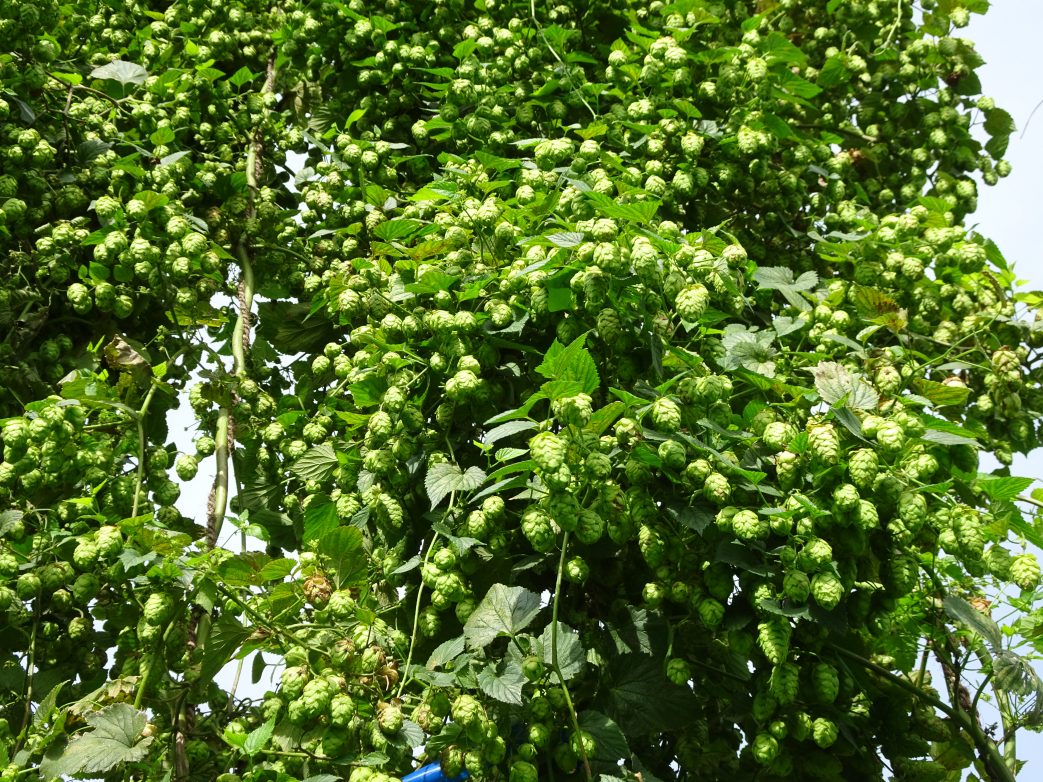 By artificially extending the day length with LED lights, proper training of plants, timely management of plant nutrient and water needs, and integrated control of pests, the team has overcome these issues and routinely produced two crops of hops a year. In particular, day length extension has proven essential to hop production in Florida; it has worked reliably and consistently over four years.

Over the last six years, the GCREC team has trialed 22 hop varieties in Central Florida. The varieties were bred in the United States and in Europe and have been commonly used by Florida craft brewers. These varieties have shown huge differences in plant growth and height, side arm (lateral) development, cone yield and cone quality.

Cascade remains the top performer with the highest cone yield on an annual basis (Figure 2). On average, Cascade sprouted by mid-February, with plants reaching the top of the trellis by mid or late April. After turning LED lights off in early May or late April, plants rapidly developed flower buds and bloomed within approximately three weeks.

With 15 feet row spacing and 3 feet in-row spacing, 968 hills can be planted in an acre. The estimated fresh hop cone yield per acre for Cascade is an average of 1,950 pounds from the spring crop and 1,120 pounds from the fall crop.

Two sources of Cascade planting stock (tissue culture liners) were planted at three densities (1, 2 or 3 liners per hill) in variety trials. Figure 3 shows no significant differences were observed between the two sources of planting stock (S1 = AgriStarts and S2 = Hopsteiner) or among the three planting densities (P1, P2 or P3). Nevertheless, planting at least two liners per hill to minimize the loss of plants in planted hills is recommended.

Ongoing studies have shown that optimizing the hop yard trellis design and horticultural practices can further increase the cone yield of Cascade in Florida.

Dried Cascade cones were provided to craft brewers in Florida to make multiple batches of beer. Brewers recognized differences between Florida-produced Cascade and those purchased from outside in bittering capacity and flavor profile. Florida Cascade tends to be more citrusy and milder. Such differences are also reflected in chemical analyses of hop cones, especially in alpha/beta acids ratios and essential oil profiles.

Three other hop varieties (Comet, Nugget and Zeus) have produced higher cone yields than many other varieties in the tests. They produce 1.49 pounds of fresh cones per hill per year, or 1,443 pounds per acre. These varieties may have the potential to produce more cones in Florida if the hop yard management schedules such as day length extension are adjusted to the growth habit and/or development stages of these varieties. Hop cones of these varieties had good aroma strength and lupulin quality brewers liked.

GCREC researchers are exploring several breeding approaches to develop new hop varieties and have selected new male and female hop lines out of seedlings from open-pollinated flowers. Two female lines have been identified that produce hop cones with strong aroma. Some male hop lines have been selected that may allow the creation of new crosses and new breeding populations.

A number of Cascade tetraploids have been induced; they produce larger and heavier cones with stronger aroma than the common diploid Cascade. These tetraploids may allow the development of new triploid hops that will not produce nuisance seeds in hop cones even if male hop plants and sources of viable pollen are present.

The researchers are particularly excited about several variant lines from Cascade that were recently identified. These variant Cascade lines produce large, long cones with strong aroma and high alpha acids and essential oil content. These new variant lines will be further tested in the next several years to assess their plant growth, resistance to root-knot nematodes, yield potential, cone quality, etc. A limited number of cones of these variants will be made available to local brewers for testing. The hop production system will be further optimized to maximize the yield of these lines. If things go well, new Florida-bred hop varieties may be available to Florida growers, brewers and consumers in five years.

A series of articles on hops has been published by UF/IFAS researchers at the Ask IFAS website (http://edis.ifas.ufl.edu/). These articles cover a range of topics, from hop yard establishment to storing harvested hops. More information on hops grown at the GCREC is available on Facebook (facebook.com/UFHops/) and YouTube (youtube.com/channel/UCMyYAfFZsib6d4ZI-eaxCTQ).