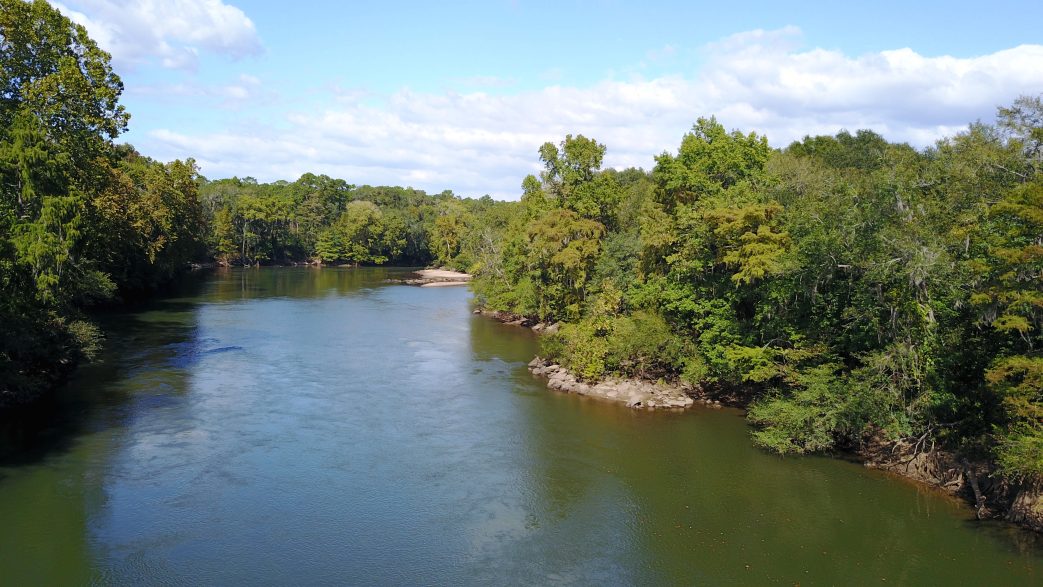 The Flint River in southwest Georgia

The Florida-Georgia water war has made it to the nation’s highest court and back multiple times due to a dispute about water conservation. The water war involves the Chattahoochee and Flint rivers. These rivers begin in Georgia, then join to form the Apalachicola River, which is near the Florida border and flows into the Apalachicola Bay.

Florida began the war by requesting limitations on Georgia’s freshwater use. Florida would like to revive its oyster industry, which requires plenty of fresh water.

As the years go on, the war continues. Back in June, the U.S. Supreme Court ruled Florida should be given another chance to prove its case that overconsumption of water in Georgia is damaging the Apalachicola River system.

Arguments from both sides have been the same during the decades-long fight. Below are accounts from a Florida resident and a Georgia resident, discussing how they view the water war and what it means to them and their states.

We have all seen the headlines. Florida is in a tizzy because the oysters in the Apalachicola Bay are starving for fresh water. The delicate balance of the bay is askew, and key litigants are pointing at water use in Georgia as the source of the problem.

Most recently, the U.S. Supreme Court told both sides to go back before a court-appointed special master and work out the details in this multi-year battle. Yet, how does Florida agriculture view this war and does it even involve the right players?

North Florida farm families have often wondered how irrigation practices in South Georgia have impacted their water supply. Increased scrutiny on both water quantity and quality by state agencies has heightened awareness of the issue.

The sustainability of water quantity was modeled when the North Florida Regional Water Supply Plan was recently developed in a collaborative effort by water management districts, municipalities, utilities and other stakeholders. Looking at groundwater modeling of the Floridan Aquifer well into Georgia and South Carolina, the largest impacts to future supply seem to come from the coastal urban regions.

Florida’s Department of Environmental Protection has developed basin management action plans to address water quality issues in several basins that extend into Georgia. Yet, the department’s jurisdiction stops at the state line.

Florida’s farmers certainly see their impact on water quality and are addressing it with best management practices, but they are concerned about nutrients coming from Georgia.

Knowing that farmers everywhere are always concerned about the environment, Florida Farm Bureau reached out to Georgia Farm Bureau to start a discussion about the sustainability of farming throughout the region.

In these interstate discussions, we are learning that although a federal lawsuit points at Flint River Basin agriculture as being the culprit for the oyster’s demise, Metro Atlanta goes unmentioned.

We have learned that Georgia farmers have followed a path similar to Florida’s farmers in utilizing advanced technology to save water and apply only when necessary for plant growth, thus decreasing nutrient runoff.

The legal and political tugging from both sides of the state line has placed regional agriculture in the crosshairs. We on the south side of the infamous line have determined that we all have a part to play in water sustainability.

The farm fields in both states are vital for our food and fiber supply and provide critical water recharge areas for our aquifers.

We have also come to the conclusion that Florida and Georgia farm families need to stick together by seeking opportunities and collaborative prioritization of issues to promote sustainable agriculture throughout the region.

Charles Shinn is the director of government and community affairs at the Florida Farm Bureau Federation.

GEORGIA:
First-hand experience and hope for the future

“Water wars” are typically common in parts of the country with little rainfall, limited resources and western riparian laws that are governed very differently than in the Southeast. However, the Southeast has had its own version of these battles over the last three decades in Georgia, Florida and Alabama over the shared Apalachicola-Chattahoochee-Flint (ACF) River Basin. The tri-state dispute escalated in 2013 to the U.S. Supreme Court when Florida sued Georgia directly over equitable apportionment of water in this shared basin.

In southwest Georgia, one single innovation can be traced to the transformation of the economy, region and production capacity: the center-pivot irrigation system. Irrigation singlehandedly spurred an economic engine and cultivated a region of global significance. With one of the world’s most productive aquifers accessible, farmers have a consistent source of water for their crops. Farmers are able to maximize land use efficiency by producing significantly higher yields on the same acreage farmed prior to irrigation implementation.

Though Georgia receives 52 inches of rainfall on average each year, precipitation does not necessarily fall at the right time and in the right amount for optimal crop development. Irrigation is the single most effective risk management tool that provides a safeguard against drought and unpredictable rain patterns. Families are able to continue farming generation after generation because of the certainty of this access to water. According to the University of Georgia Center for Agribusiness & Economic Development, agriculture has a $16 billion annual impact in southwest Georgia alone.

Florida sought a cap on Georgia’s water use through this case. Experts on Florida’s side of the case recommended reducing Georgia’s irrigation by half — or completely — to increase freshwater flows across the state line. Scientific evidence provided by Georgia shows this proposed “remedy” would not contribute enough water into the system to make a substantial difference for estuaries in Apalachicola and would come at devastating costs to Georgia.

Justice Clarence Thomas writes, “Florida did not demonstrate that, if this Court caps Georgia’s water use, Florida would receive a meaningful amount of additional water during droughts.”

Drought is a challenge that the entire ACF River Basin will continue to face in the agricultural, municipal and industrial sectors. This is not a challenge that can be solved in the courtroom.

As a sixth-generation farmer on the Flint River in southwest Georgia, my entire future depends on the ability to access water and irrigate crops. My sincere hope is that in my lifetime and career of farming, we will take a collaborative approach to managing this shared resource that impacts the livelihoods of millions of people. The decision rendered in this case will impact both our generation and many generations to come. Agricultural water use is the lifeblood of our region.