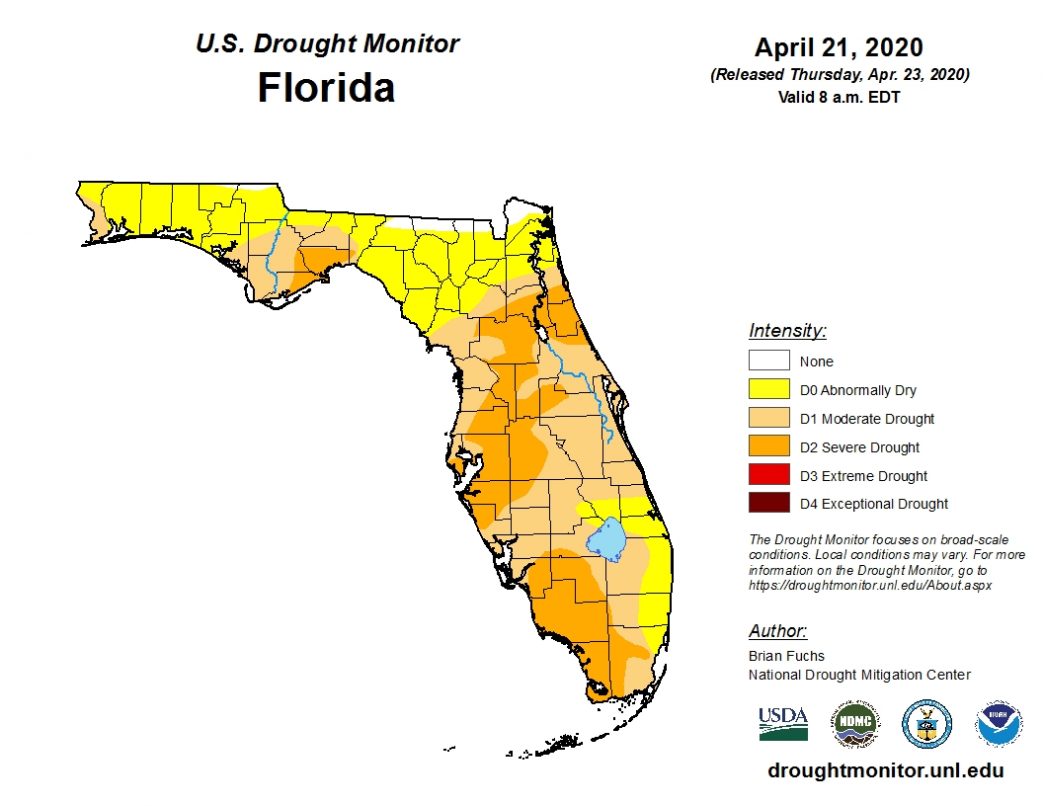 A water restriction has been placed on one Florida county because of the long drought. Gene McAvoy would not be surprised if more restrictions will follow.

On Friday, the South Florida Water Management District (SFWMD) and Lee County announced mandatory irrigation restrictions. According to the press release, the restrictions were to address low aquifer levels. They went into place on Saturday.

“On the coast, they rely a lot more on wells, well fields. Water levels in the aquifer has dropped to extreme levels. That’s why they started with Lee County,” said McAvoy, UF/IFAS Extension agent emeritus. “I haven’t seen anything like this (drought) since 2008.”

The most recent map of the U.S. Drought Monitor shows Florida either in abnormally dry, moderately dry or severely dry conditions. Lee County, whose county seat is Fort Myers, is experiencing a moderate drought and severe drought in different parts of its county.

“We did have a little bit of rain in Southwest Florida (Sunday) night, but it was really (just) enough to settle the dust in most places,” McAvoy said.

Due to the extended drought and record heat, Florida agriculture has been negatively impacted.

“I’m actually in a (citrus) grove right now. Because of drought stress and the record heat we’ve been enduring the past few months, the trees are shedding fruit,” McAvoy said. “Farmers are not able to harvest them quite as fast as the fruit is falling off the tree. (We) probably got two boxes per tree on the ground right now in the grove I’m in right now.”

The current rainfall deficit, extreme heat and decreasing surface and groundwater levels are expected to continue throughout the remainder of the dry season. It typically ends around the end of May.

In a previous VSCNews story, climatologists fear that the drought will get worse before it gets better.