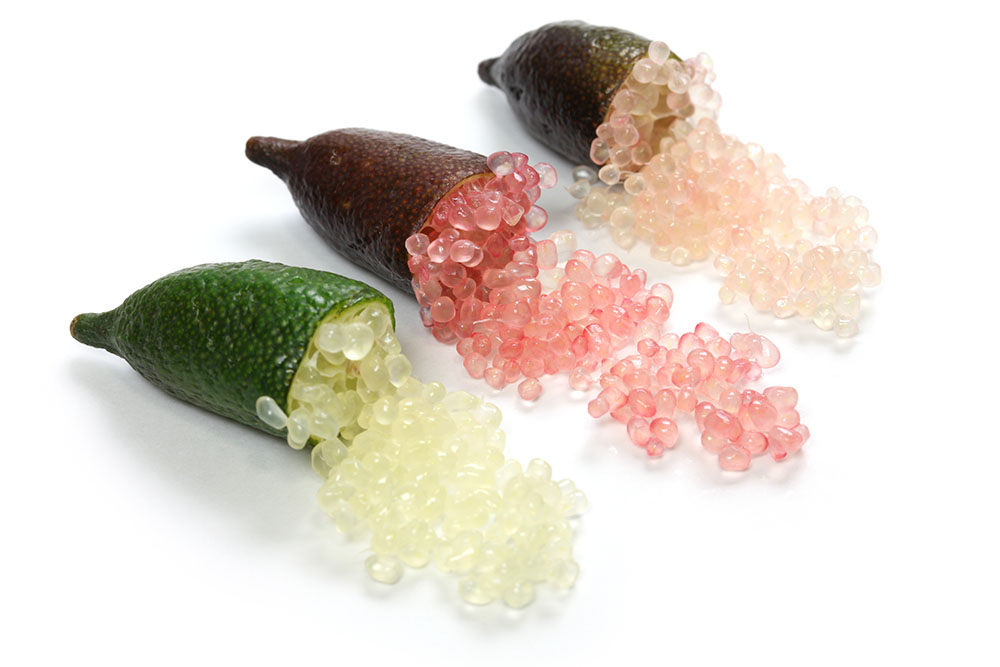 Finger limes are 2- to 4-inch, finger-shaped, cylindrical fruits belonging to the citrus family. They taste like limes but are generally less sour. Finger limes are native to the Australian rainforests. The trees are found growing wild in the coastal regions of western Australia and have been used for sustenance by the native Aboriginals for eons.

Although in the citrus family, finger limes have several unique characteristics that distinguish them from other types of citrus. Finger limes contain round to teardrop-shaped vesicles that are firm and translucent. These vesicles tend to burst out of the fruit when it is cut and separate into individual “pearls” resembling caviar, giving the nickname citrus caviar. Conventional citrus on the other hand contains tender, teardrop-shaped juice sacs that adhere to each other.

The finger lime juice vesicles (or citrus caviar) come in a variety of colors (white, pink, red, yellow and green). The common type of finger lime has white, yellow or green pulp, while the sanguinea type contains dark red pulp (Figure 1). Consuming the citrus caviar produces a tingling sensation in the mouth as the caviar breaks up and releases its limey flavor.

Trees are slow to establish in the initial 12 to18 months after planting, and the grower will not see much vegetative growth during that time. It is possible that the trees spend their initial months developing an extensive root system before allocating resources for top growth. Trees begin to flower and fruit from year three onward after planting.

Finger lime trees have small leaves and flowers, mainly in the spring. Intermittent flowering also occurs throughout the year. Trees are thorny, and the fruit must be carefully harvested. A thick pair of gloves is needed for every picker!

Finger limes are produced by several growers in California and Hawaii. Due to hardiness and less susceptibility to disease, finger limes require a lower input of fertilizers and pesticides (compared to conventional citrus production) in these states. The acreage allocated to finger lime cultivation in Florida is minor, with at most 12 to 15 acres under cultivation. Widespread adoption is restricted because there is a lack of suitable varieties and limited grower knowledge about this crop.

Recently, a commercial variety popular in California was imported to Florida, and trees should be available in the next few years. The University of Florida’s citrus improvement team at the Citrus Research and Education Center (CREC) is also developing several exciting new selections that should be released in the near future. The CREC maintains a 2-acre trial for cultivation of finger limes on different rootstocks for stakeholders to visit.

Finger limes are still relatively rare, and there is good market demand. They are sold at a premium price in the California specialty fruit markets. The U.S. domestic retail price ranges from $30 per pound for the fruit (0.35 to 0.39 ounces per fruit) to about $50 per pound for the premium fruit (more than 0.5 ounces per fruit). Once harvested, finger limes have a four-week shelflife when refrigerated. The fruit, which retains its shape and flavor when frozen, can be a substitute for lemon and lime varieties that cannot sustain prolonged freezing periods during post-harvest storage.

Within the United States, the finger lime is beginning to gain popularity and could eventually become more mainstream as the crop supply increases and the crop price decreases. In California, finger limes are mainly distributed in large metropolitan areas where they are sold primarily to high-end retail markets and upscale hotels, bars and restaurants.

As production increases, prices in the local market will likely decline. This could stimulate the local demand for finger limes as they become more accessible to a wider cross-section of consumers. Drawbacks include the current high retail price for the crop, limiting the growth in its demand; labor requirements for harvesting the crop; and the need to optimize production practices.

Manjul Dutt is a research assistant scientist and Jude Grosser is a professor, both at the University of Florida Institute of Food and Agricultural Sciences (UF/IFAS) CREC in Lake Alfred. Edward “Gilly” Evans is a professor and director of the UF/IFAS Tropical Research and Education Center (TREC) in Homestead. Aditya Singh is a former economics research scholar at the TREC.