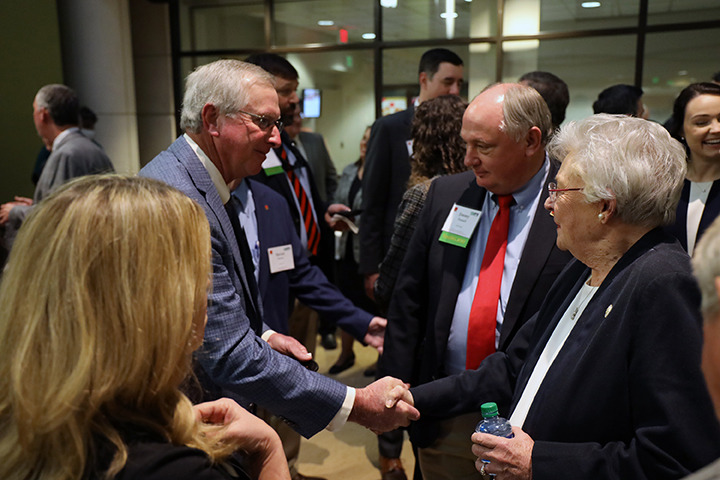 Alabama’s 2022 state legislative season was a success for agriculture with the passage of key farm legislation bills.

“Products like jams, jellies, arranged cut flower bouquets and even boiled or roasted peanuts are going to be sales tax-exempt if the value-added process is being done on the farm by farm employees,” Thaxton explained. “A lot of our growers in Alabama, like fruit and vegetable growers, will grow strawberries, for example. If they have excess strawberries, they make a jam or jelly.” He said prior to the legislation, those farmers would have had to charge sales tax at a farmers’ market.

“It’s just burdensome. It’s more paperwork that they’re going to have to keep up with that’s outside of their other sales,” Thaxton said. “Starting October 1, 2022, if they’re harvesting those strawberries and they’re making a jam or jelly on their farm with their employees, and then selling it, they can do that without having to charge sales tax in the future.”

The passage of the bill was also a win for consumers. “Certainly, any business owner or farmer is going to cover their costs when they set a price, and then the taxes are going to be on top of that with whatever profit they can make,” Thaxton said. “So, this is going to lower what consumers have to pay for a product that’s grown right here in Alabama. It should help stimulate our economy locally and also help the small farms be sustainable economically into the future.”

FEES REMOVED
Another bill in the Farm Package, HB 415 by Rep. Gil Isbell (R-Gadsden) and its companion SB 273 by Sen. Tom Butler (R-Madison), prohibits the requirement of a county license or fee for operations selling products at places like farmers’ markets.

“It’s basically a clarification on earlier legislation,” Thaxton explained. “There is existing legislation that prohibited cities from requiring a license or a fee to operate and sell farm products. However, it wasn’t clear whether counties were also prohibited from doing so. This clarifies that and prohibits the requirement of county licenses or fees for operation by the county.”

Thaxton said while only a few counties in the state had tried to issue extra fees, this clarification was needed. He called it a “big win” for farmers and said it removed more burdensome fees and regulations.

“A lot of vegetable and fruit production in the state comes from smaller family farms that sell direct to the consumers at farmers’ markets or on their farmstand,” Thaxton said.

“Just imagine if you’re a farmer in Alabama, you may go to five to 10 of these different markets in different counties. If you were required to pay for a business license in each of those different counties, you would have a lot of fees racking up on your business. That reduces the chance of making a profit or a living off of the farm and selling the product. This just clarifies that law and the intent of the law.”

MORE LEGISLATION
The Farm Package also included HB 400 by Rep. Wes Kitchens (R-Arab) and SB 275 by Sen. Larry Stutts (R-Tuscumbia), which eliminated inconsistencies across jurisdictions by clarifying the ad valorem tax exemption for grain bins. It made all grain bin structures and parts used for preparing grain for market exempt.

In addition to the bills in the Farm Package, a number of agricultural programs in the state received new or additional funding. The Sweet Grown Alabama statewide branding program was funded for another $300,000. The state’s Farm-to-School program also received $300,000 in funding. Additional funds for FFA and 4-H programs were approved.

“Alabama currently had the lowestpaid agriculture commissioner in the Southeast, and this will bring that position up to a more competitive level,” Thaxton said. “We’re excited to see the legislature helping the agriculture industry by making the position more competitive to our neighboring states.”

Thaxton said the 2022 agricultural wins are a good sign for the future. “The commitment of the state legislature to support family farms through those bills and the funding to Sweet Grown Alabama is very encouraging,” he said. “The biggest message that we would like to send is that, in our state, lawmakers are supportive of family farms. We’re happy with that and excited about what the future holds based on what they did in this session.”