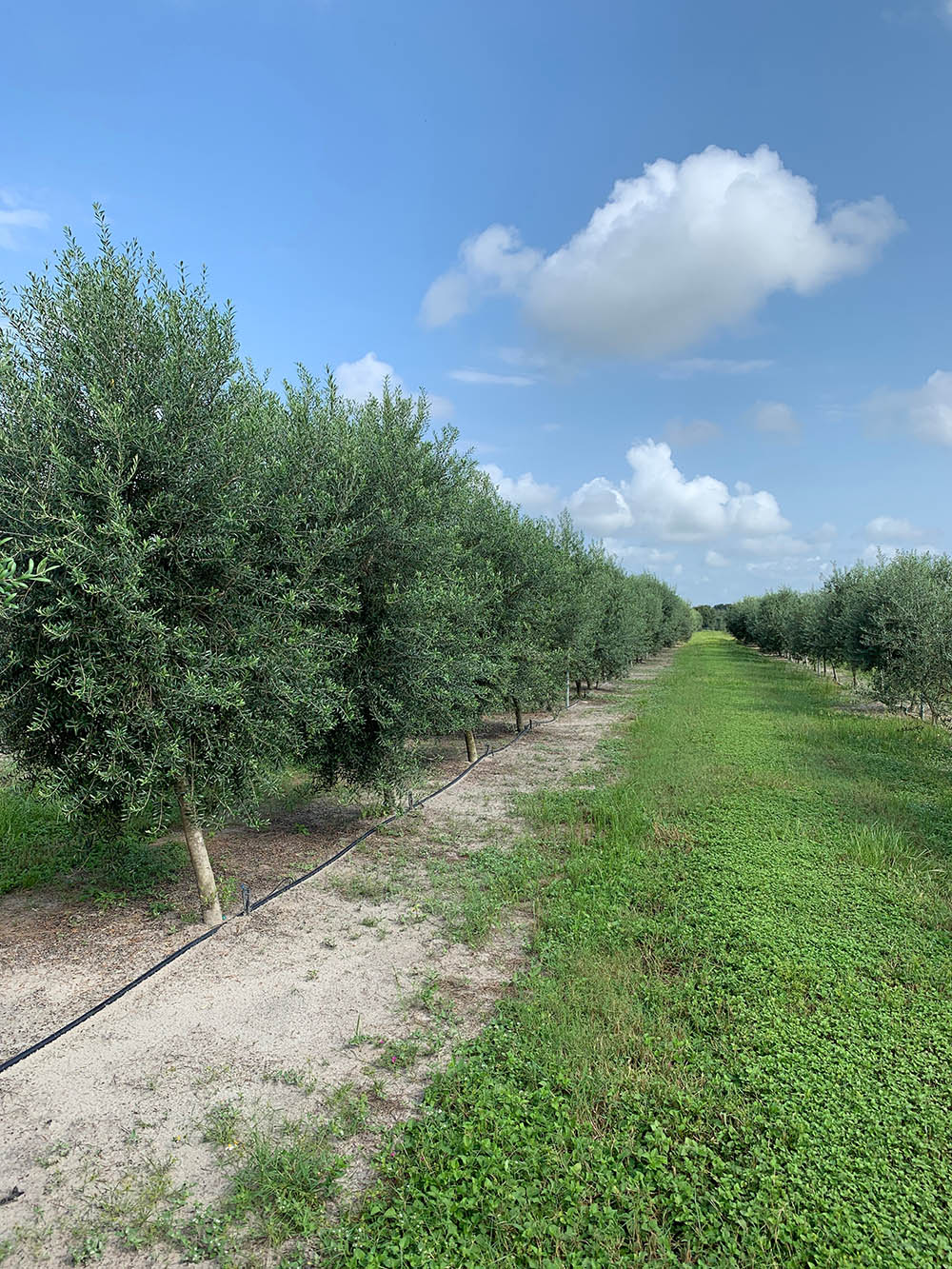 With weather and soils similar to the Mediterranean Basin, olives grow in Florida and throughout much of the southeastern United States.

Currently, Florida has approximately 800 acres of olives under active cultivation by 60 to 80 individual farmers in 20 counties. The groves range from backyard hobby plots with several trees to high-density commercial operations of 100 or more acres.

Thought to originate in the Fertile Crescent (Syria, Iraq and Iran), olive is the world’s oldest known continuously cultivated crop. For thousands of years, olives were gathered in the wild. The oil was crudely extracted by crushing fruit between stones and sieving or straining the pulp. Today, olive oil is a major commodity traded throughout the world and prized for its gastronomic and heart-healthy characteristics.

Spain is by far the largest producer of olive oil, followed by Italy and Greece. In the United States, olives are commercially grown in California, Oregon, Washington, Texas, Arizona, Georgia and Florida. There are hobby and experimental olive plantings in Louisiana and Alabama.

The United States consumes 80 to 90 million gallons of olive oil per year or about 1 liter per person. Domestic farmers, going at full throttle, produced less than 5 percent of total annual consumption.

Organic certification brings even higher prices. Braggs organic EVOO (imported from Greece), sells for $70 per gallon. Apollo, a top California producer, retails its Mistral and Sierra organic blends for the equivalent of around $200 per gallon. Mistral oil is based on the Ascolana, an olive variety currently producing at Greengate Olive Grove near Marianna in the Florida Panhandle.

Although the olive grows in Florida, it has been considered more of a curiosity than a commercial crop. While the University of Florida/Institute of Food and Agricultural Sciences  (UF/IFAS) and Florida A&M University have olive observation plots, and agribusiness giants like Mosaic and Lykes Brothers have small experimental groves, little formal research on Florida olive cultivation is available to support industry development.

With the notable exception of work by the UF/IFAS Department of Entomology and Nematology, most information on the UF/IFAS Extension website dates from 2012 and is focused on California olive research and production. The Texas A&M University website provides significantly more information on growing olives in the Southeast.

The Florida Olive Council, a non-profit grower organization, conducts some research, and the Hardee County Industrial Development Authority has several thousand olive trees at its research facility near Wauchula, Florida.

The main problem cultivating olives for commercial purposes in Florida is the availability of varieties adapted to lower latitudes where there is less winter chill. Olive varieties (Arbequina, Koroneiki, Manzanilla, etc.) commonly used in commercial operations are native to northern Mediterranean countries like Spain, Italy and Greece (38° to 41° north latitude), where 300 to 400 hours of winter chilling are common. Olives must accumulate enough chill hours between November and March to bloom. A chill hour is one hour between 32 and 45° F.

While northern Mediterranean varieties grow throughout Florida and reliably produce in the Panhandle, they rarely bloom and fruit south of Interstate 4 (27° north latitude).

As Florida searches for a solution to citrus greening, many acres below Interstate 4 are fallow, and farmers need an alternative crop to augment citrus. New crop ideas like industrial hemp are popular, but the U.S. Department of Agriculture (USDA) suggests returns on industrial hemp are between $116 to $475 per acre compared with Florida citrus at $2,800 per acre and California olives at $2,688 per acre.

Responding to the need for olive research, the Hardee County Industrial Development Authority enlisted the support of the Florida Olive Council and UF/IFAS to begin research developing a market-viable, “low-chill” olive for southern Florida.

After installing several thousand mature olive trees on an old citrus grove, the Hardee County researchers secured 45 olive varieties from the USDA olive germplasm in California. Varieties were selected based on geographic origin. The researchers wanted olives adapted to areas around 27° north latitude.

Bill Lambert, executive director of the Hardee County Economic Development Council, hopes to see some early results next year. “It takes at least three years for the grafts to mature enough to bloom, so we expect to start looking for our low-chill candidates next year,” Lambert said.

In addition to the grafting experiment, Lambert is in discussions with UF/IFAS to explore developing a low-chill variety using a new gene-editing process called CRISPR-Cas9.

Kevin Folta, a noted UF/IFAS genetic scientist, has begun basic research. He hopes to get the program fully funded soon. “The science is there, we just need to get to work,” he said.