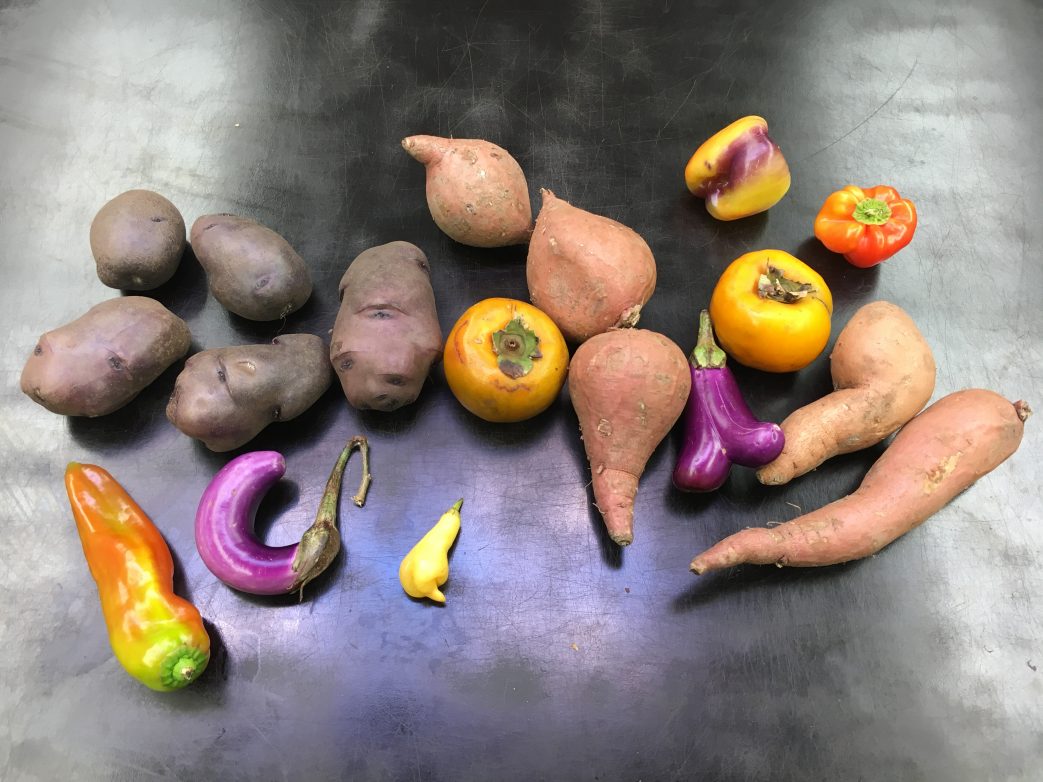 Each year, up to 20 percent of the fruits and vegetables harvested in the United States go to waste because they’re not visually pleasing to consumers.

Jeffrey Brecht, professor in the Horticultural Sciences Department at the University of Florida, works in the area of post-harvest horticulture. He focuses on measuring the quality of fruits and vegetables in his research. Brecht’s goal is to slow down the deterioration of quality so that produce remains fresh as it moves through the distribution system to consumers.

“There’s this trend I think that people are starting to realize that a lot of the fruit we see in the stores is cosmetically perfect because the grade standards don’t allow anything that’s not perfect in appearance to be marketable,” explains Brecht. “A big source of waste in our food system in the U.S. is that the less than perfect fruits and vegetables are not marketable, so they’re thrown away.”

From the standpoint of taste and nutrition, Brecht says there is no reason that you shouldn’t buy these ugly fruits because they are equal to fruits that look perfect.

“If you visit a fruit or vegetable packinghouse, you’ll see a conveyor leading outside the building, dumping the culls into a truck, and they’re being taken to a landfill,” says Brecht. “I know in some limited cases, tomato culls get used for cattle feed, but that’s really the only example I’m aware of where they’re not just being thrown away.”

Brecht says the United States has such an abundant food supply that it can afford to only sell the most perfect-looking items. For the rest, there’s no market. Abundant fruit and vegetables also create a very competitive marketplace where you can’t sell anything that’s not top quality, he adds.

There is a movement going on now to buy local, and Brecht hopes this will reduce food waste. “When people talk about buying local, sometimes they’re talking about the big retailers sourcing fruits and vegetables locally, which I think most of them do to some extent. But also, it means the direct-to-consumer marketing, the farmers markets and the roadside stands,” explains Brecht. “In those situations, they’re not following the same grade standards either — the USDA (U.S. Department of Agriculture) grade standards or the grade standards that the big retailers have.”

The rise in buying locally is thought to be linked to people being more accepting of less than perfect fruits and vegetables, realizing that if they don’t get eaten they’re going to be thrown away and wasted.

Brecht knows that quality is always deteriorating as fruits and vegetables move through the marketplace. “Everything I do is looking for ways to slow that down so that the quality loss is minimized,” he says. “If you buy things locally, you’re going to have foods that are fresher. The fruits and vegetables can be left on the plants longer than would be necessary if they are going to be shipped a long distance.”

There have been some recent surveys of food waste and loss around the world. Waste refers to food that could be eaten but is thrown away instead. Loss is food that is spoiled or eaten by insects or rodents. If it’s lost, there’s no chance for people to eat it. “It’s really a big problem,” says Brecht. “It’s been estimated in some USDA and some FAO (Food and Agriculture Organization) reports that food loss and waste in the U.S. for fruits and vegetables approaches about 40 percent of the total harvest, which to me is a stunningly high number.”

The only solution Brecht thinks will work is to search for alternative markets for the produce that’s being thrown away. “The USDA has their U.S. grade standards, but most of the retail chains have their own standards that are even more restrictive,” says Brecht. “They have to look for other alternative markets or work with their current customers to see if they’re interested in having the type of ugly fruit on sale that some other people have tried. It wouldn’t hurt to ask,” Brecht concludes.