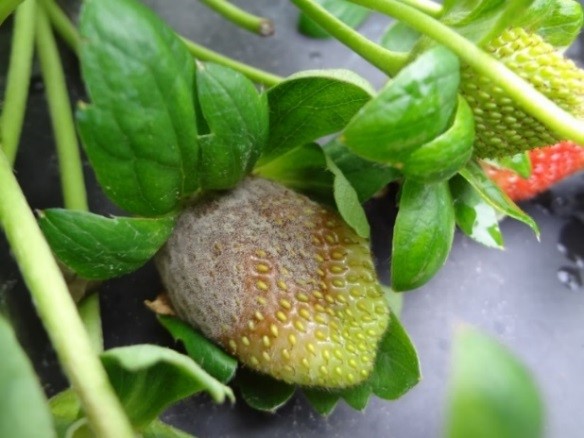 Of all the challenges that Florida strawberry growers had to overcome this year, it appears that disease pressure was not a major threat.

Natalia Peres, professor of Plant Pathology at the University of Florida/IFAS Gulf Coast Research and Education Center, confirmed that normal diseases have not been as prevalent in most fields this season. Weather conditions favored strawberry production this year.

“The weather has been dry and cool. It’s been really good for the berries, not as good for diseases. Most of the fungal diseases we have are favored by rain and long wetness periods. We didn’t have many days like that during the season,” Peres said. “We did have rain, mostly in November. But then after that it was pretty dry and cool all the way to the end of January. That really kept inoculum levels down.

“Now, even if we have weather that is conducive, the inoculum levels are low. I think it’s very unlikely that we’ll have a major outbreak at this point. We’re mostly talking about neopestalotiopsis, which was the main concern the past two seasons. We could still have some botrytis. It is always out there if the weather is conducive, and it looks like we might get some rain this week.”

One Florida farmer confirmed last week that market prices are less than desirable. Matt Parke, farm manager of Parkesdale Farms in Plant City, Florida, said prices were less than $7 a box when input expenses were totaling $9 a box. The current market may impact growers’ management of diseases moving forward over the final month.

“At this time of the season, the prices are not as good. Even if (growers) lose some fruit, they usually don’t worry about it as much. The recommendation at this time is to work more with the preventative fungicides that are not as expensive like Captan; those protectant materials that will give them good control without breaking the bank,” Peres said.