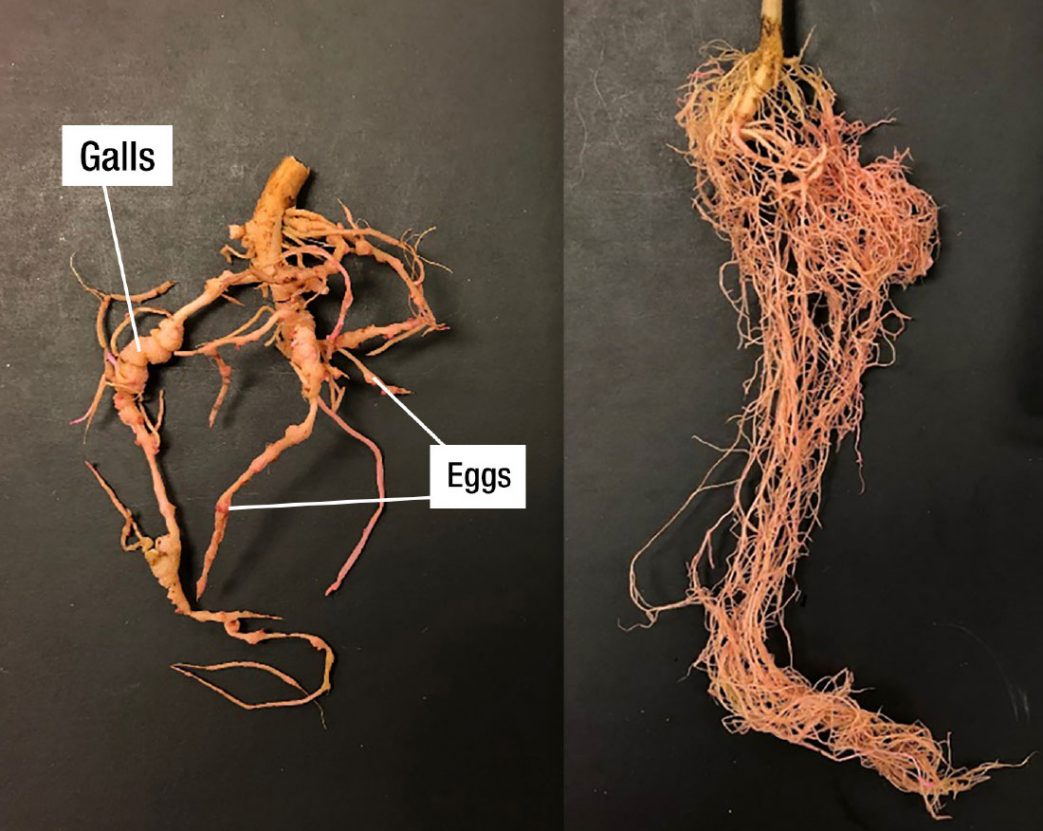 By Abolfazl Hajihassani and Josiah Marquez

Multiple cover crops are excellent candidates for vegetable growing systems in the southern United States due to their ability to fix nitrogen, build and maintain soil organic matter, and suppress soilborne pathogens, nematodes and weeds. In addition, cover crops can be a valuable strategy for improving microbial diversity and soil health when properly implemented.

There is plenty of evidence in scientific literature to support positive effects of certain cover crops in management of plant-parasitic nematodes. The key to success is understanding the factors that drive variation. Though suppressive cover crops will not eliminate nematodes from soil, they may reduce their population densities enough to allow proper production of susceptible vegetable crops in infested fields.

In Georgia, multiple root-knot nematodes (Meloidogyne spp.) are widely dispersed in the southern part of the state where they cause severe yield losses particularly in cucurbits, eggplant, tomato and pepper. During a survey in 2018 for nematodes in commercial vegetable-growing regions in southern Georgia, root-knot nematodes were found in approximately 67 percent of fields.

In the Southeast, chemical control is the most predominant approach for managing Meloidogyne spp. in intensive cultivation systems of vegetables.

However, certain summer cover crops, including sunn hemp (Crotalaria juncea), sorghum-sudangrass (Sorghum bicolor x S. sudanense) and velvetbean (Mucuna pruriens) have been implicated in reducing population densities of root-knot nematodes in soil. In Georgia, despite long growing seasons, the practice of growing two to three crops on the same piece of land often leaves a narrow window for the use of cover crops.

Many summer cover crops are susceptible to nematodes, resulting in an undesired population increase in soil during the growth of crops. To avoid this, cover crop species or cultivars that are poor hosts (resistant) to nematodes should be recognized.

In an attempt to find alternatives for control of root-knot nematodes in vegetable production systems, a series of greenhouse experiments was conducted in 2019 at the University of Georgia Tifton campus. The goal was to identify cover crop species/cultivars with potential to prevent the reproduction of M. javanica, M. incognita and M. arenaria. The cover crop susceptibility/resistance was characterized by evaluating root galling and egg-mass index.

Cover crops that were highly resistant across all three Meloidogyne species include velvetbean, marigold (Tagetes sp.) and sesame (Sesamum indicum). Resistance to parasitic nematodes is characterized as the ability of a plant species to prevent root-knot nematode development or reproduction.

The reproduction of these nematode species on sorghum-sudangrass and sunn hemp varied from susceptible (good host) to highly resistant (nonhost) plants. For example, an unspecified cultivar of sunn hemp was susceptible to M. arenaria and resistant to both M. javanica and M. incognita.

Special attention to the presence of other plant-parasitic nematodes in soil is also necessary when planting a cover crop. Past research has suggested that Meloidogyne-resistant cover crops may support the reproduction of other nematode types in the soil. If vegetable growers think they are having issues with nematodes, soil samples can be analyzed at nematode diagnostic services to determine the types/species of nematodes and their population density for proper selection and management of cover crops to meet goals.

Other key factors to get the optimal benefits of cover crops are planting time, seeding rates and termination (mowing) times. Currently, field research (Figure 2) is being conducted in southern Georgia to determine the effect of spring and summer planting of sunn hemp for optimal biomass production and its influence on nematodes, weeds and soilborne diseases. The goal is to examine the effects of cover crops alone or in combination with tillage practice or chemical control approaches for effective management of plant-parasitic nematodes.