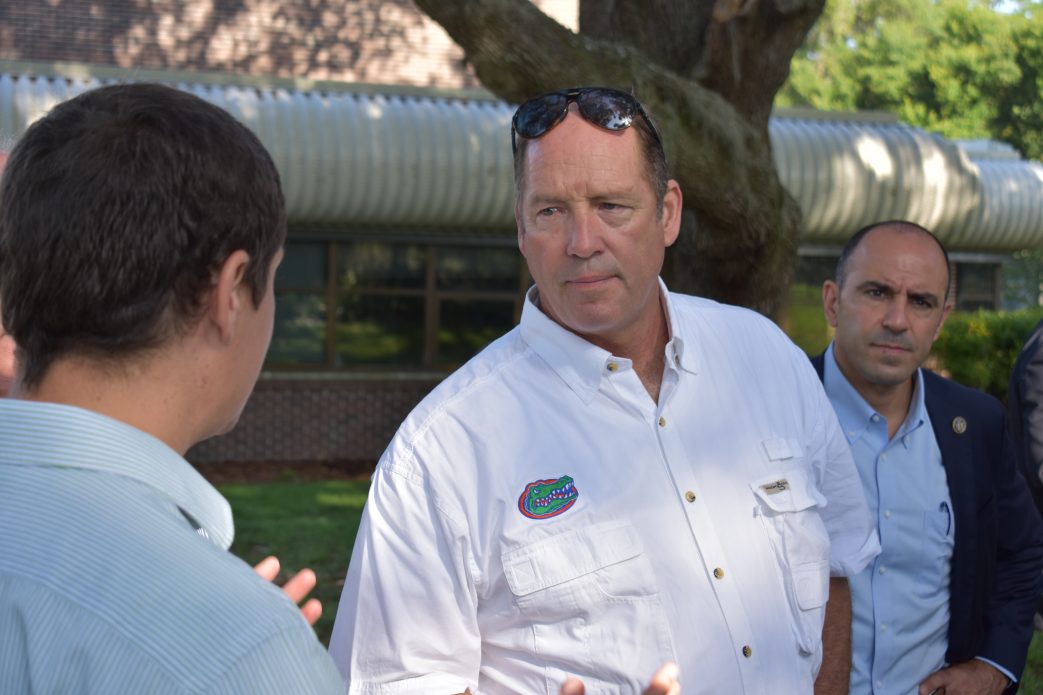 Before returning to Washington, D.C., U.S. Congressman Ted Yoho stopped by AgNet Media’s Gainesville office to discuss the farm bill. The House and the Senate both passed their versions of the farm bill. Now, an appointed committee will hammer out the details of the separate bills to combine it into one.

There is a massive amount of crucial policies for farmers and the American people included in the farm bill. However, for the sake of time, Yoho focused on some standout policies and issues that surround the bill.

SUGAR PROGRAM CRUCIAL FOR PRODUCERS
The sugar program within the farm bill has seen some backlash. Many people may see the sugar program as a subsidy, but Yoho sees it as a crucial aspect to the U.S. sugar industry.

Without the sugar program, the sugarcane industry could heavily weaken due to increased foreign competition. The United States grows about 70 percent of its own sugar. Yoho says that percentage, and the low price of sugar, is due to the sugar program. “It’s a good program; don’t mess with it,” Yoho says.

He explains his view on the sugar program:

NUTRITIONAL TITLE CHANGES IN HOUSE FARM BILL
The House made some changes to the nutritional title of the farm bill that the Senate’s version did not replicate. The biggest change that was made was reinstating a work requirement to receive food stamps.

According to Yoho, the work requirement in the House version would require able-bodied adults from the age of 18 to 59 to work a minimum of 20 hours per week, go to school at the expense of the government or do volunteer work. “We just want people back to work,” he says.

DISCONNECT BETWEEN THE PUBLIC AND THE FARMER
There seems to be a disconnect between the public and the farmer when it comes to the farm bill. Some people see it as an overspending bill. Yoho believes this may be because the farm bill is a massive bill. The 2014 farm bill totaled $750 million, with 79 percent going toward nutritional programs and 21 percent going toward farm programs.

He says another disconnect may be because of politics. The two separate sides of this bill seem to cause a rift between the farmers, who focus on the farm programs, and the general public, who focus mainly on the nutritional programs.

SNAP OUTSIDE OF THE FARM BILL?
In 2014, separating the Supplemental Nutrition Assistance Program (SNAP) from the farm bill was spoken about, but did not happen. According to Yoho, the inclusion of the nutritional programs in the farm bill encourages more people to support the farm bill. “It’s a way of political wrangling,” Yoho says.

He believes the United States does need nutritional programs. So since those programs are here to stay, he would rather see them fall under the jurisdiction of the U.S. Department of Agriculture.

“WE NEED THE FARM BILL”
Yoho stresses the importance of passing a new farm bill before the 2014 bill expires in September. He says the only way for the United States to remain having the best quality and the biggest quantity of food in the world is for a viable farm bill to be passed.

Yoho understands the importance of this bill to the nation’s farmers. “(The farm bill) reduces risk for our farmers so they can go out and do what they do better than anyone else on the planet,” he says.

Yoho explains why the farm bill must be passed on time:

During his visit to AgNet Media, Yoho also discussed the Wildfire and Hurricane Indemnity Program, as well as the importance of funding for citrus greening research.