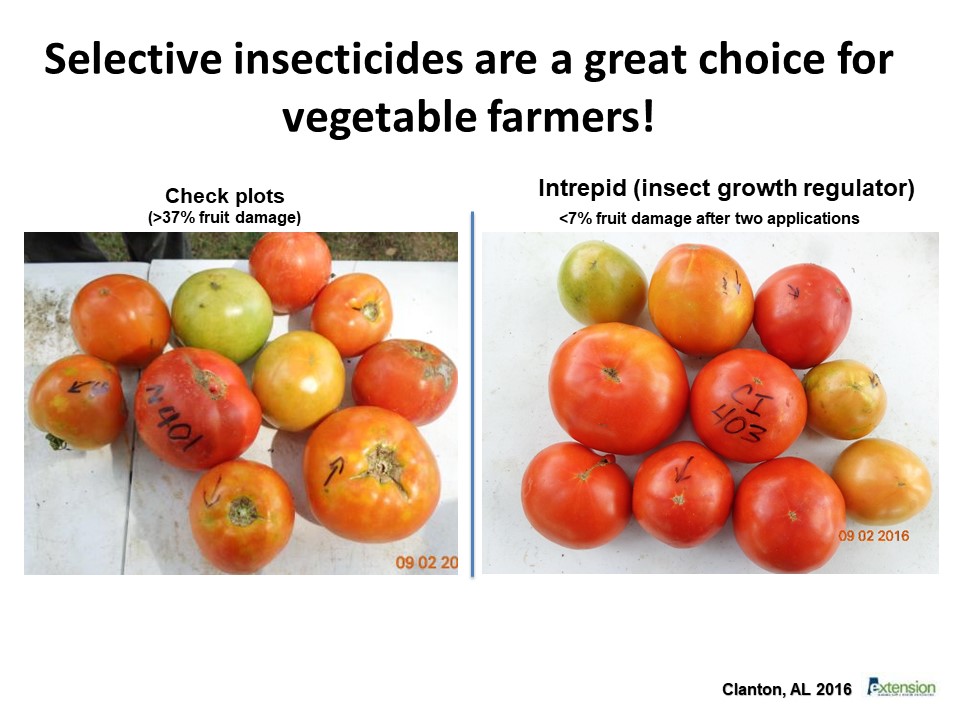 Selecting insecticides can be extremely cumbersome and complex. Ayanava Majumdar, Auburn University Extension entomologist, says there are five different “mode of action” categories that can help conventional growers decide what kind of insecticide will be most effective in their production systems. The five categories are contact poisons, insect growth regulators, mitochondrial or cellular respiration inhibitors, Bacillus thuringiensis and the unknown.

CONTACT POISONS
According to Majumdar, contact poisons are nerve toxins. Poison attacks the nerves of the insect once it goes through the cuticle of the insect. Contact poisons usually include old chemistries such as the carbamates and organophosphates.

New discoveries of contact poisons are constantly occurring, so growers can be on the lookout for new products. For example, neonicotinoid insecticides have been developed. These insecticides are systemic, which means when they are applied to the plant either through foliage or soil, they stay in the plant’s system for a long time to provide long-term control.

Majumdar says some of these new discoveries are nerve toxins, but they attack specific muscles of the insect.

The new discoveries will be a turning point in the contact poisons world. Due to the fact that most contact poisons used are the older chemistries, some insects have developed resistance to the poisons. Majumdar says if a contact poison is not working in a production system, growers should contact their local Extension agents to discuss resistance management or other insecticide options.

INSECT GROWTH REGULATORS
Majumdar says insect growth regulators (IGRs) get their name because they are contact poisons that impact insect growth and development. In some products, IGRs mimic the juvenile hormone and stop the insect from growth. Other products simply stop the molting process.

IGRs are very specific to insects like caterpillars, spider mites and whiteflies. IGRs do not impact beneficial insects too badly, making them better for the environment than broad-spectrum nerve poisons.

Majumdar says that in Alabama, if a grower is having resistance issues when using contact poisons, IGRs are a great option. “You can also prevent some of those secondary insect outbreaks from happening,” he adds. MITOCHONDRIAL OR CELLULAR RESPIRATION INHIBITORS
Mitochondrial or cellular respiration inhibitors actually stop the respiration and energy cycles within the cells of the insects. There are many popular miticides that belong to this category, such as Portal, Acramite and Kanemite.

BACILLUS THURINGIENSIS
Majumdar says many organic producers will recognize Bacillus thuringiensis (Bt), which is a stomach poison. First, the insecticide stops the insect from eating, then it seeps into the stomach. “It’s a soft poison, so it takes time to kill,” Majumdar says.

THE UNKNOWN
The fifth category includes insecticides with unknown modes of action or multiple targets. “They’re unknown because the molecule is so complex,” Majumdar says. One example is the product neem (containing azadirachtin), which has antifeedant and growth inhibitor properties on small, soft-bodied insects.

Understanding these five categories make navigating through insecticides a little simpler. “The insecticide world is very complex,” Majumdar says. He adds that the grower should also be familiar with insect feeding patterns. Knowing which insect is infesting the crop can make it easier to choose an insecticide.

For detailed information, Majumdar recommends growers refer to the Insecticide Resistance Action Committee (IRAC) website. The website provides basic modes of action and more information on how insecticides are classified.