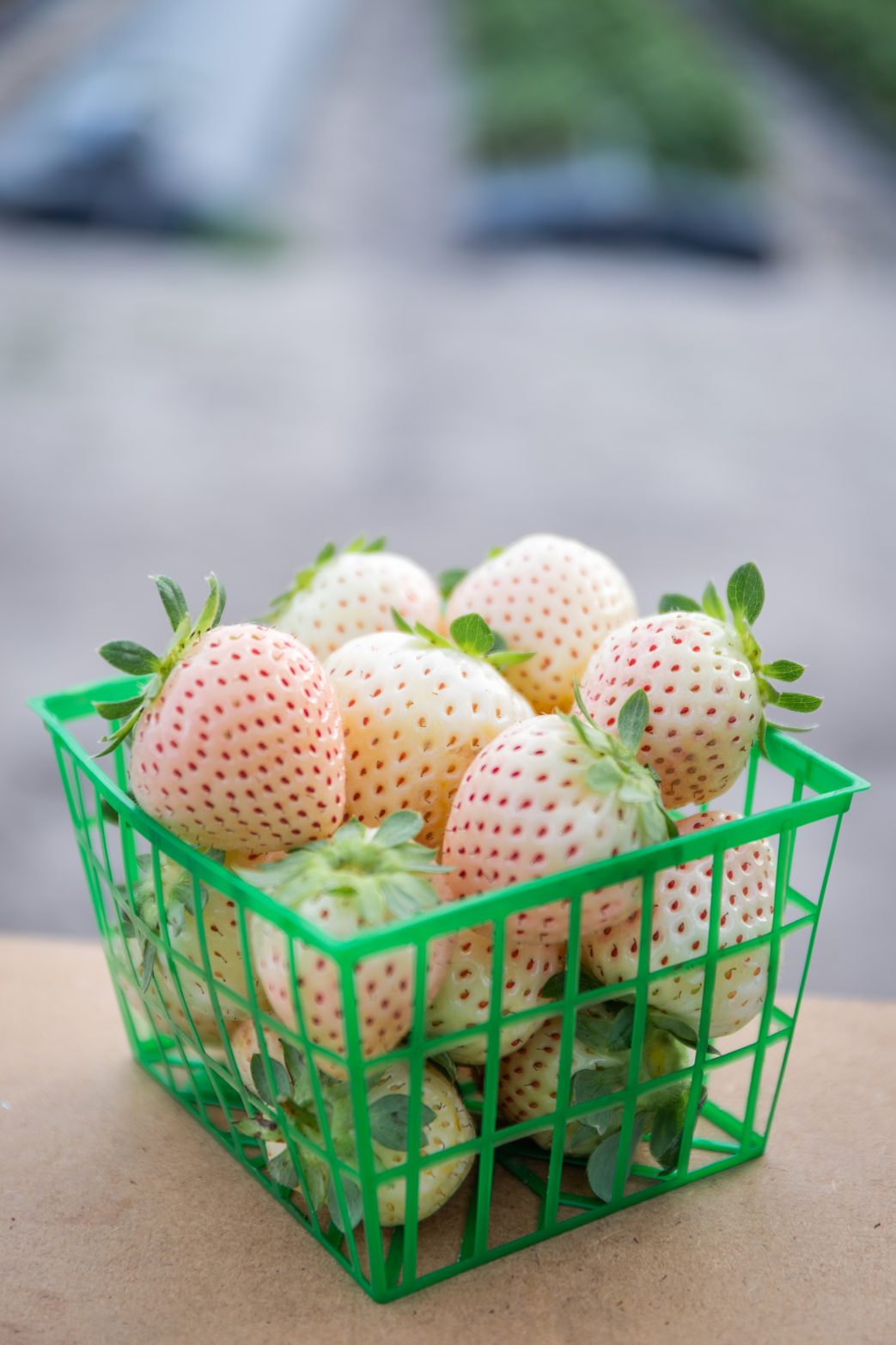 The University of Florida will soon commercialize a new strawberry variety. It doesn’t have a name yet, but it is already drawing attention for a very unusual characteristic. When it is ripe and ready to eat, it is white inside and out, with a slight pink blush on the exterior and red seeds. The flavor is very different from a typical strawberry, sweet but with a pineapple-like aroma. White strawberries have been popular for some time in Japan, but this is expected to be the first white strawberry on the market in the United States.

The red color of the typical strawberry comes from pigments called anthocyanins. White strawberries produce much lower amounts of these compounds in their flesh than red strawberries. Recent research has shown that white strawberries of various types all have DNA sequence changes in a single gene called MYB10, which is involved in the synthesis of anthocyanins. These changes keep the gene from carrying out its normal function, essentially halting the chemical process in the fruit that produces red pigments.

HOW IT WAS DEVELOPED

In 2012, some strawberry seeds from fruit purchased in Japan were brought to the University of Florida. The seeds were sown, and a few small plants were recovered. The pollen from these plants were crossed with a Florida variety. The seedlings from this cross produced fruit that ranged from white to pink to red.

Further crosses with Florida varieties were made, ultimately resulting in a strawberry with similar hardiness and fruit characteristics to modern varieties but with white color. Commercial trials have been promising so far. Pickers can tell when the fruit is ripe when a slight pink blush develops on the sun-side of the fruit, and when most of the seeds turn red. By 2022, these new white strawberries should be available in U.S. grocery stores.

There are many different species of strawberry throughout the world, and white strawberries are naturally found within several of them.

Beach Strawberry (F. chiloensis)
The beach strawberry is found in the wild along the Pacific coasts of North and South America. F. chiloensis is one of the most recent ancestors of the modern strawberry. Some of the beach strawberries found in South America are naturally white or pink. The fruit only grow about as large as a thumbnail and are very soft compared to modern strawberries. Some varieties of this species that are crossed between F. chiloensis and the modern strawberry (F. × ananassa) have been called “pineberries.” Some varieties of pineberries are available for home gardeners, but they are not large enough or firm enough to be produced and sold on a large scale.

Cultivated Strawberry (F. × ananassa)
A white beach strawberry from Chile and another wild species from North America called F. virginiana with bright red fruits were collected by explorers and brought to Europe about 300 years ago. There they accidentally hybridized to produce the cultivated strawberry or “modern” strawberry, F. × ananassa, that we know today. Almost all the strawberries currently grown and produced in the United States are F. × ananassa. White cultivated strawberries have been bred for some time in Japan and sold at high prices as novelty items. However, white strawberries have not yet caught on as much in other areas of the world.

See programs.ifas.ufl.edu/plant-breeding/strawberry for more information on University of Florida strawberry breeding and genetics.