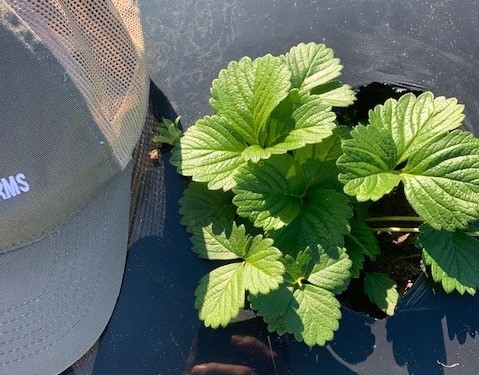 Clemson Extension agents provide updates in the The South Carolina Grower this week about the status of various crops being produced throughout the state.

Rob Last reports, “In our area, crops are developing well with few pest or disease issues currently. Some brassicas are displaying a reddening to the older leaves associated with reduced phosphorous uptake. Phosphorous uptake can be reduced in cold temperatures and will recover when we see some warm temperatures. There is no response to an additional application. Where strawberries are flowering or have fruit, it is advisable to remove those to minimize sources of Botrytis gray mold for later in the year.”

Zack Snipes reports, “Strawberry questions have begun rolling this week with the threat of lower temperatures at the end of the week. For growers in the coastal plains, I would not cover my berries. Temperatures are predicted to get into the low to mid-20s. At the stage of development we are in right now, it would take lower temperatures and extended periods of time to do crown damage. Will you lose berries and blossoms? Yes, but right now we shouldn’t be trying to save those anyway. After the weather passes, make sure to clean/sanitize your fields. I am seeing a good bit of botrytis (gray mold) on early fruit. Some growers are trying to save fruit but we have to keep in mind that it is mid-January and the plants need to size up and experience a few cold events. We have a long season ahead of us.”

Justin Ballew reports, “The weather has been strange over the last couple of weeks. The week after Christmas was very warm and caused strawberries to push out a lot of blooms that were then killed by the cold. We have a ton of dead blooms and fruit on the plants right now. Eventually, these will need to be removed from the plants, as they will become a significant source of Botrytis inoculum if allowed to remain. I’ve had some questions about whether we should cover the plants to protect them from the cold we’ll be experiencing over the next week. This shouldn’t be necessary, as the plants are hardy to the mid-teens (F) in the crown development stage. Plants are still a little behind due to late planting.”

Phillip Carnley reports, “We are thankful to have some rain in Orangeburg and Calhoun counties. There has been little insect pressure on greens in my area, and the harvest was average. Now is the time to start pruning muscadine vines as well as managing soil fertility. Strawberries have started flowering earlier than expected due to the warmer weather we had in December, with some light fruiting being seen as well. I recommend if you have the ability, remove any early blooms and fruit to promote crown and root development. In my areas with the cooler temps being called for this weekend, strawberries should be fine without being covered.”

Sarah Scott reports, “We have had some chilly temperatures in our area over the last few days but luckily no ice to speak of. The cold weather is helping with the accrual of chilling hours that are needed for a good peach crop this year. Crews are getting busy in the peach orchards, pruning and putting out dormant oil applications.

Bruce McLean reports, “A lot of strawberry growers are looking at a strawberry crop that is well behind where it should be. There are a number of reasons that can be pointed to, but really the main contributor is the cool spell that we had back in the fall right after planting. Seems like the plants that were planted in the first week of October just look much better than the plants planted a little later – much better sizing, crown count and vegetative development. Some other problems that have been seen include root rot, j-rooting, and just generally a few weak plants from the nursery. So far, spider mites have not been an issue. Many of the growers (with plants that are really behind) have asked how they can “make up ground” with the crop. Unfortunately, there is not a tremendous amount that can be done to “make up ground”. The plant has to have that period of fall growth to be able to set sufficient crown count and thereby make a crop come spring. Unfortunately, yield will be off. From here on out, manage the crop the best you can to maximize what harvest you will have coming in the spring.”

Kerrie Roach reports, “Cold temperatures, ice, and snow have been the name of the game in the Upstate the last few days, and that same theme seems like it’s going to continue into this weekend. Growers with high tunnels and greenhouses should be removing the snow load to prevent collapse. Young fruit trees may need to be shaken to remove ice and snow loads to prevent breakage. Now is a great time to make sure all your equipment is ready and in great shape for the season; tune-up, sharpen blades, check fluid levels, etc.”