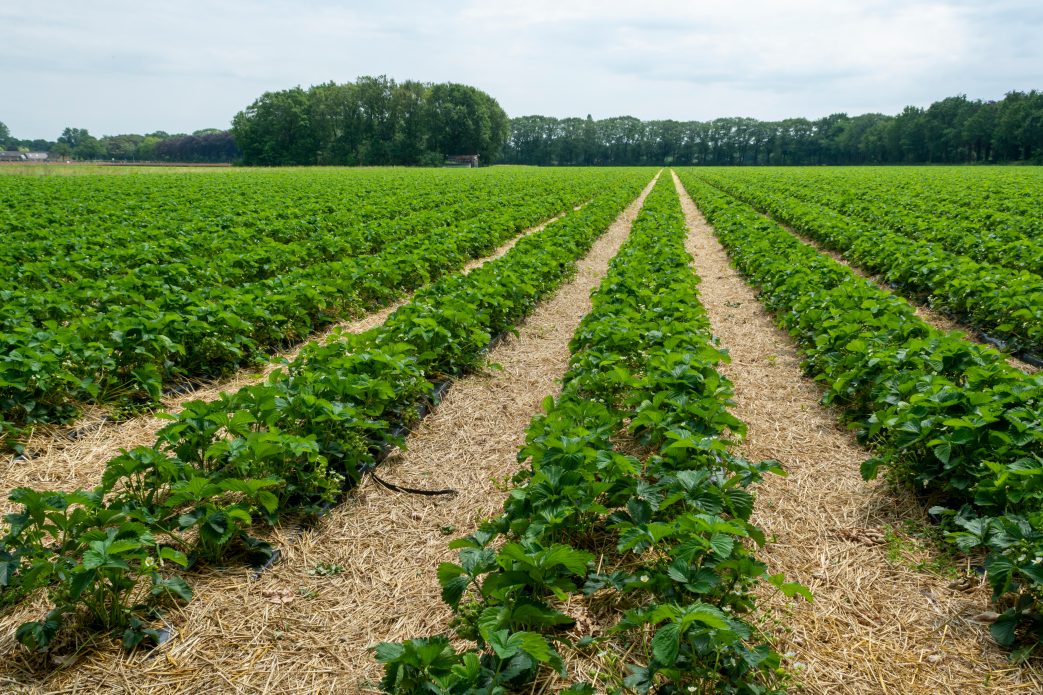 Rob Last reports, “Spider mites in the area are increasing in number on a variety of crops including strawberries and watermelons. When choosing an insecticide always choose a specific miticide. By using a specific miticide rather than a broad spectrum pyrethroid we minimize the risk of flaring populations. Fruit crops in the area are producing well with botrytis and anthracnose evident in strawberries; less so in blueberries at present. Continuing sanitation and fungicide applications will help to increase marketable yield and reduce disease pressure. Cucurbits in the area are developing well and are responding well to warmer weather. Cucumber crops are approaching vining when a pass with a tined weeder is very effective. Watermelons are also running well and will soon be leaving the plastic. If you haven’t begun disease management programs, now is the time. Initially, chlorothalonil can be very effective if bacterial fruit blotch is an issue. Apply a mixture of manzate and copper. Remember copper does not mix with chlorothalonil.

Justin Ballew reports, “This past week sure felt like summertime. Plants seem to be enjoying the heat, so long as they have plenty of water. We’ve had some scattered showers, but the moisture has dried up quickly. As a result, we haven’t seen as much disease this past week as I expected. Insect pests, on the other hand, are out in full force. Diamondback moth caterpillars are causing issues in brassicas, and spider mites are easy to find in strawberries. Cyclamen mites were also found in a strawberry field in the Midlands this week. Portal and Agrimek are the better products for managing cyclamen mites. Being that we’re in the latter half of the strawberry season now, sap beetles are also present. Be sure to stay on top of removing overripe or damaged berries from the fields, as these are great breeding sites for sap beetles.”

Sarah Scott reports, “We have started harvesting early-season peaches along the Ridge. Fruit size is still a bit small but should be good for mid-season varieties. We are nearing the period of summer cover sprays for bacterial spot. Remember that mid-May to early June is a critical time for spray applications to prevent large fruit lesions.

Andy Rollins reports, “Strawberry production is still in full gear. Multiple farms have abnormally severe Phytophthora root rot. Plants are being examined for resistance to Ridomil. Overuse of this product over time is believed to have been the cause. The peach crop is strong in many areas. Focusing on controlling plum curculio is important. Growers are thinning their crops as quickly as possible. Some varieties are more difficult to make decisions on, as we are seeing cold damage that’s obvious and some that isn’t quite as obvious. The freeze on palm Sunday caused skin damage to the outside, but seed is still good and is growing in some cases. Growers are having to look closely for signs of cat claw. All of the vegetable crops are being planted now.”

Kerrie Roach reports, “Strawberries are in full swing in the ‘Golden Corner’. Warm-season vegetable crops are finally going into the ground, and apples are just about finished blooming. With the warm weather and clear days over the last two weeks, things have really started to flourish. Cover sprays on apples should begin and continue through the season. Scout for insects and disease every few days. With warm weather and rain predicted later this week, consider working your schedule around the rain.”