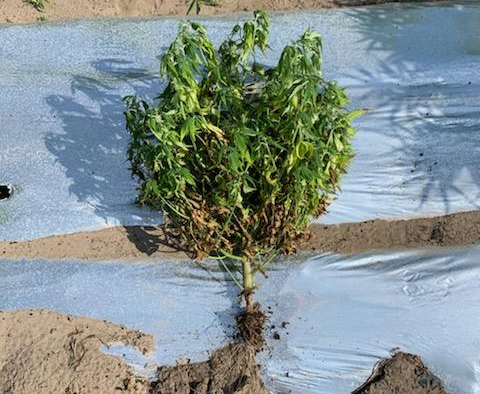 Clemson Extension agents provided updates in The South Carolina Grower this week about the status of various crops being produced throughout the state.

Dr. Matt Cutulle reports, “It is always good to control goosegrass even if it is past the critical period for competition with the crop. Lack of late-season control made hand-harvesting tomatoes difficult. Also, there will be a huge deposit of goosegrass seeds into the soil seed bank for next year unless the seeds are destroyed after the harvest.”

Zack Snipes reports, “We experienced a nice hot week of weather in the Lowcountry.  Most crops are finishing up with the heat and recent rains.  On later season tomato I have seen bacterial leaf spot on the fruit which makes fruit unmarketable. I am seeing this on the second cluster of fruit set and not on the first or third clusters. Hemp seems to be off to the races and looking pretty good so far. There are within every hemp field occasional wilted, stunted and yellowed plants. These plants always have a weak root system and most of the time have girdling and interveinal discoloration.  Peppers and eggplants are loving this heat and are producing in high volumes.”

Justin Ballew reports, “Last week was hot and mostly dry, though we did have some scattered thunderstorms come through over the weekend. Field prep for fall crops continues. We’ve had some fall tomatoes, peppers, and brassicas transplanted already and more to come this week. Everything is growing pretty fast right now and we’re still picking spring crops. Keep an eye out for spider mites, as they love the hot, dry weather we’ve had lately.”

Sarah Scott reports, “We are still ahead of schedule on peach varieties being harvested. Early August Prince and August Prince are being picked now which is over a week earlier than usual. The fruit quality is still good with slightly smaller than ideal fruit. With the extreme heat and lack of rain in the past week, summer crops like tomatoes and cucumbers are looking rough. Bell peppers are doing well.”

Bruce McLean reports, “Sweet potatoes are looking good. Establishment seems to be very good for the most part. Long green cucumbers, yellow squash, zucchini, cantaloupe, peas, okra, and sweet corn are harvesting well. Condition is good to very good. Sweet corn will be wrapping up shortly. Blueberries are pretty much finished, with only a few remaining fruit on Powderblue. Fruit condition is fair to good. Muscadines are coming along nicely and appear to have an excellent crop. Fresh muscadines should be beginning harvest soon, with wine/juice grapes still a few weeks from harvest. Be on the lookout for Grape root borer moths. They are starting to emerge. They were being caught in traps placed in vineyards in Marion and Horry counties.”

Kerrie Roach reports, “Spotty rain and high temperatures have left many small growers scrambling for irrigation options throughout the Upstate. Peaches and nectarines are still being harvested. Blueberries are just about finished, and farmers’ market produce is starting to wind down with the heat. Apples should begin next week with early varieties like ‘Ginger Gold’  and ‘Golden Supreme’.”

Andy Rollins reports, “Plenty of early blight, bacterial spot/speck on tomatoes this season, but some of the more troublesome problems have been various tomato virus problems. When diagnosing virus problems it is important to get lab verification because herbicide injury can look very similar when just going by visual symptoms. If you suspect herbicide drift from a neighboring farm. Look for damage to other broadleaf plants in the area in between the suspected source and the damaged plants. Follow the wind direction.  You should have more severe damage on the leading edge. Also, herbicide residual from a previous crop like sunflowers can also give you herbicide damage that you did to yourself. Read and follow all pesticide label directions. There are plant back restrictions on some herbicides so be careful. If this is the case the damage should be fairly consistent/uniform throughout the area that was planted in the other crop.

Unlike both of these other situations, virus problems may come from your seed source, the greenhouse where plants were grown or from weeds in the field. Pokeweed is commonly a source, as are many other broadleaf weeds. Thrips, aphids, and whiteflies are all known to vector viruses into plants. Symptoms are what you see below with “shoestring” looking leaves, leaves with distorted veins, and mosaic yellow and green coloration. There are many viruses that infect plants. Each of them can show different symptoms and also they can each look different on other plants as well. It’s even possible for a healthy-looking plant with no symptoms to be infected with several viruses.”