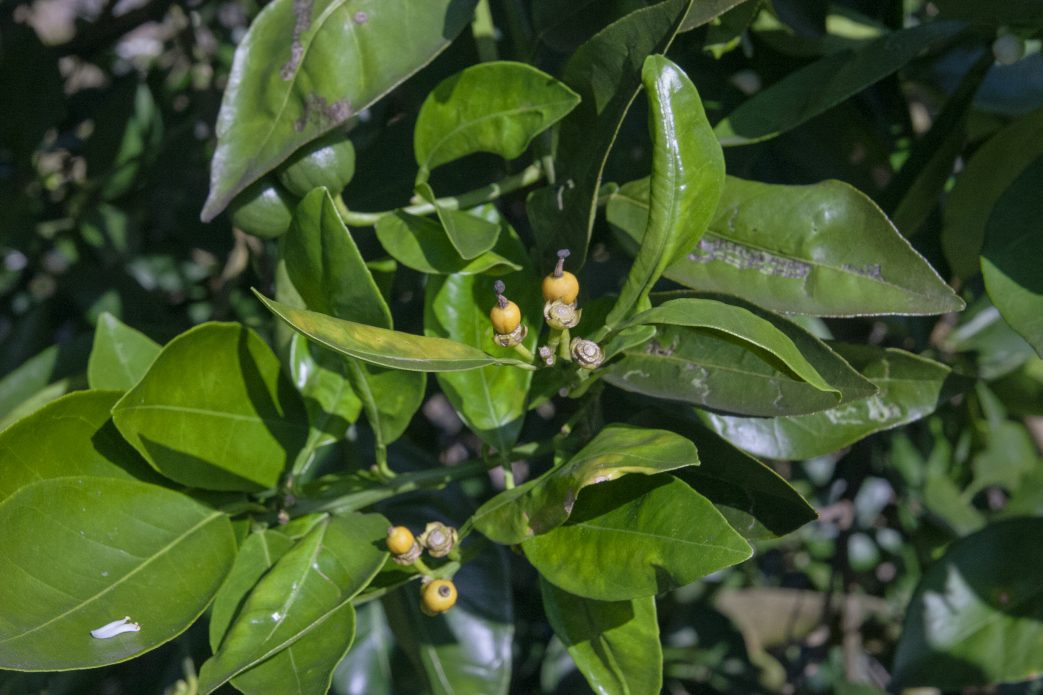 Beep. Beep. Beep. That’s the sound of the alert, telling a citrus grower it’s time to spray fungicide to help prevent fruit from falling off the tree.

When the new fruit fall off a citrus tree, post-bloom fruit drop (PFD) can cause major losses for citrus growers. Infection of flowering citrus by the fungus that causes PFD can lead to crop loss of up to 80%, although losses are seldom that high, UF/IFAS researchers say.

In the battle against PFD, UF/IFAS scientists have developed the Citrus Advisory System (CAS), which sends web-based alerts to citrus farmers via mobile devices. That way, growers can tell when to spray their trees with fungicide.

“We believe that CAS represents an important contribution to help the citrus industry in Florida increase resource-use efficiency, reduce costs and increase profitability,” said Clyde Fraisse, a UF/IFAS professor of agricultural and biological engineering at the main campus in Gainesville, who led new research to develop and test the system.

In newly published research, Fraisse, his lab members and faculty colleagues tested CAS over three years at farms in Polk County. Among those who helped Fraisse with the research were Megan Dewdney, an associate professor of plant pathology at the UF/IFAS Citrus Research and Education Center and Natalia Peres, a plant pathology professor at the Gulf Coast Research and Education Center.

CAS, available at http://agroclimate.org/tools/cas, uses real-time weather data from stations with the Florida Automated Weather Network, which are scattered throughout the state. The data determine whether risk for PFD is low (green), moderate (yellow) or high (red). Specific fungicide spray recommendations are given according to the disease-risk conditions. If desired, notifications can be sent via SMS or e-mail for an alert to check the system.

Prior to CAS, there were two forecasting models for post-bloom fruit drop, Dewdney said. The most recent was the PFD-Fungicide Application Decision (PFD-FAD), which was developed as part of Peres’ Ph.D. dissertation about 20 years ago. Growers found PFD-FAD too complicated to use regularly since the weather information was not automated and it required grower input to determine if the fungus was present.

“In the new CAS, we consider the fungus to be present at all times and the weather data input is automated, so the system is simpler to use,” Dewdney said. “We also have newer models for how leaf wetness and temperature affect spore germination. They’re incorporated into the system to help predict when infection is likely to happen or has occurred. Combined with a more modern, simple interface, this will hopefully allow growers to use CAS regularly. During our last outbreaks, many growers were applying weekly fungicide applications, whether they were needed or not.”

CAS mirrors the Strawberry Advisory System (SAS), developed by Fraisse and Peres several years ago. SAS also sends web-based alerts to growers, so they know when to spray for diseases like anthracnose. Until scientists developed that system, strawberry growers sprayed for the fungus on a calendar-basis; for example, every other week, whether the fungus was there or not.

Peres said it’s important to note that anthracnose and citrus post-bloom fruit drop are both caused by the same fungus, Colletotrichum acutatum.

Just like the Strawberry Advisory System, “CAS aims to take the guesswork out of whether an infection occurred or not,” Dewdney said. “Some growers are already using CAS and have been happy with the outcomes.”

“You can use the system now, and we encourage it,” she said. “We are still confirming the accuracy of the predictions, but it is still better than just a weekly application.”

The system is already available in Brazil, where it’s been tested extensively.