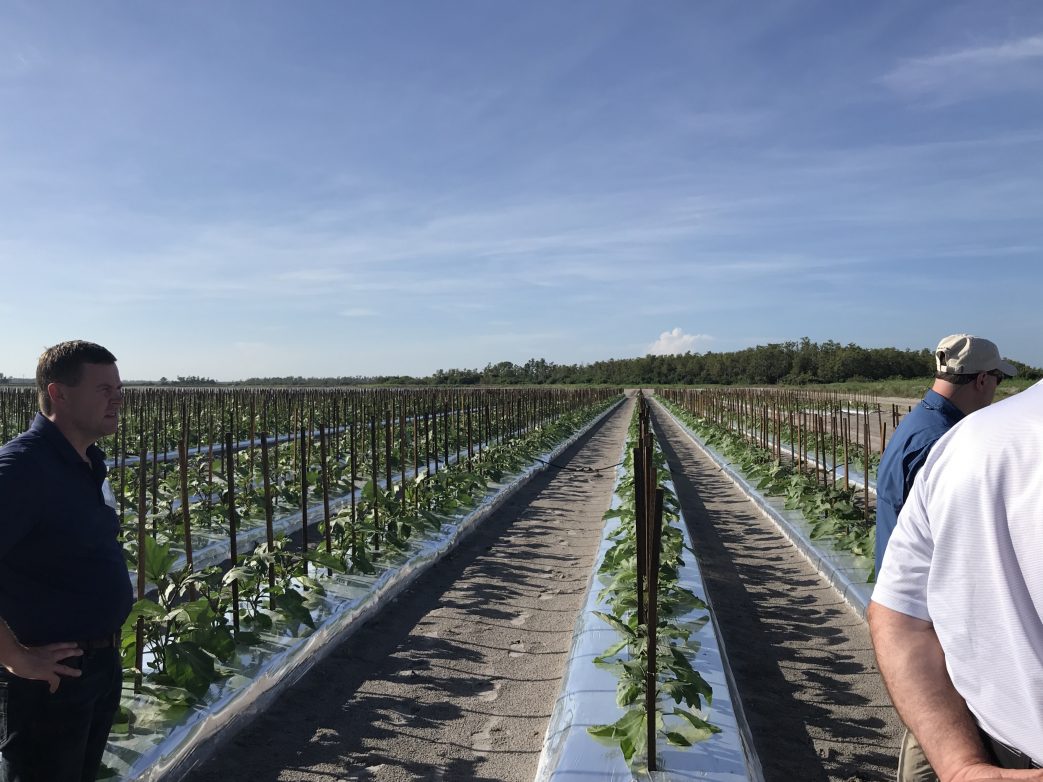 Certified Crop Advisors (CCA) from around the United States and Canada gathered in Bonita Springs, Florida, this week for their annual board meeting. The meetings began on Sept. 18, but several attendees arrived a day early to embark on a tour of South Florida agriculture.

Armando Campos, chairmen of the North American CCA board, says he wanted to showcase the complexity and diversity of Florida agriculture during the tour. “(It’s about) giving a little perspective as to what a CCA in Florida has to go through compared to other parts of the country,” he explained.

Campos said that other states may have only a few different crops grown on millions of acres. But in Florida, there are over 300 commodities grown on a smaller area of land. “It may not be over millions of acres, but it’s very economically significant,” he said.

Campos hopes that the CCAs were able to walk away with new ideas that they can take home and apply to their own regions and operations.

The bus began driving through the farm as Roan described which crops were going to be planted on which fields. Attendees were able to see some rows of reflective plastic mulch laid out in preparation for planting. Roan explained that the plastic was brought in as a way to combat pests. He said it works, but is not as effective as it was once thought to be.

Since Lipman was still in the planting stages, attendees were only able to see 12 acres of eggplant beginnings on plastic beds. Still, out-of-state attendees reveled at the sandy soils, some even asking how it’s possible to grow anything on the sand.

Roan spoke about how the eggplant will eventually be harvested by hand with shears. This led to him explaining where Lipman sources its labor. “We’re about 60 to 70 percent H-2A now,” he said. With the border becoming more and more dangerous to cross, it is difficult to find local workers. According to Roan, although H-2A is cumbersome and costly, it at least provides a steady workforce.

Roan briefly touched on pest and disease issues Lipman vegetables are facing. He explained that after losing methyl bromide, he saw an increase of southern blight in the field. Pepper weevil has also been wreaking havoc in the fields. However, Lipman’s biggest issues continue to be nematodes and weeds.

A. DUDA AND SONS
The second stop was at A. Duda and Sons. Rob Atchley, general manager of citrus groves, boarded the bus to lead the tour. He began by talking about the history of A. Duda and Sons, a family owned and operated farm that had its beginnings in Oviedo, Florida.

While at A. Duda and Sons, attendees were able to see two of Florida’s staple crops: citrus and sugarcane.

Atchley spoke about the devastation caused by citrus greening over the past decade. He explained his operation is still spraying for psyllids in an effort to expand a tree’s life as long as possible. This is the attitude many citrus growers have as nearly 100 percent of Florida citrus groves are infected with HLB.

Another method Atchley discussed is planting in high densities. However, he cannot say whether or not the high-density plantings have produced higher yields yet. He expects to have more information on that after this season.

The bus stopped at a sugarcane field, where McAvoy began cutting a stalk, so attendees could have a taste of the cane. Atchley described how the sugarcane is harvested and how it is sent to the mill. A. Duda and Sons works with U.S. Sugar. The harvested product is brought to the mill by railroad. (Learn more about how sugar is harvested here).

Campos was excited for his fellow CCAs to be able to taste the fresh sugarcane. “A lot of people may not have had opportunities to see a field of sugarcane growing, cut a stalk and chew on it to taste the sugar and the sweetness,” he said.

Atchley also said that A. Duda and Sons is mostly using the H-2A program. He echoed Roan’s comments: Although the program is costlier, it does provide steady, reliable labor.

C43 WEST BASIN STORAGE RESERVOIR
After visiting with Atchley, attendees were taken to the Southwest Florida Water Management District’s C43 West Basin Storage Reservoir worksite. There, they learned about how important water flow can be to a farmer in the Southwest Florida region. They learned about the C43 West Basin Storage Reservoir Project, which will capture and store basin stormwater runoff and regulatory discharges from Lake Okeechobee to reduce excess freshwater flows to the Caloosahatchee Estuary. More reports will be coming on this project, so stay tuned.

Campos hopes that his fellow CCAs were able to gain some knowledge about the diversity of Florida agriculture compared to other states. He also hopes they gained more of an appreciation for being a CCA. “Although some of the challenges we face may not be the same, we share the same goals of stewardship of the land and stewardship of the environment, and providing sound agronomic advice to our growers,” he concluded.