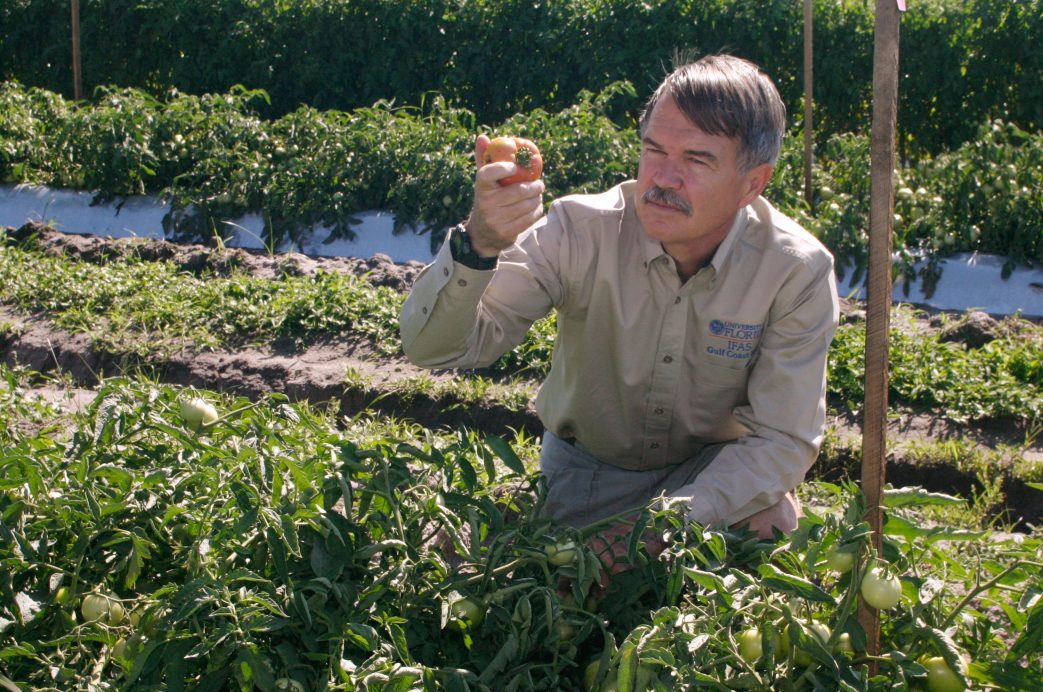 (UF/IFAS) — A University of Florida tomato expert is calling on researchers worldwide to use genetics to help farmers grow tastier tomatoes in many geographic locations.

“I am proposing a worldwide approach involving public and private breeding programs that one day might make dissatisfaction with tomato flavor obsolete,” said Scott, who gave a presentation at the Tomato Breeders Roundtable and Tomato Disease Workshop in November in Clearwater, Florida.

Weather and other conditions constitute “different environments.” Specifically, Scott means various soils, irrigation, rain, fertilization programs and temperature, among other factors. For example, a tomato that tastes good in Florida may taste even better if grown in Mississippi because Florida’s soils are not as good as those in Mississippi, he said.

“There’s a huge environmental effect on flavor in tomatoes,” Scott said. “You may not get the same flavor in different places. The big trick is to get an environmentally stable good flavor.”

In more than 30 years as a tomato breeder at the UF/IFAS Gulf Coast Research and Education Center in Balm, Florida, east of Tampa, Scott released many varieties. So, he’s got decades of research to back up his assertions.

“We should test material around the world,” he said. “This approach would involve a whole bunch of people. Everybody’s input would be helpful. Plus, I like the international cooperation aspect.”

Another example of environment influencing flavor: Tomatoes harvested during the spring taste better than those from the fall, according to research that colleague Elizabeth Baldwin and Scott published in 2015.

At UF/IFAS, associate professor Sam Hutton – one of Scott’s protégés – continues to develop several flavorful tomato varieties. Other scientists around the world are developing similar types of tomatoes.  Scott encourages them to share seeds of those new types of tomatoes to grow and taste in their fields and labs – sort of double-blind taste tests. That way, scientists could find out if, for example, tomatoes developed in California taste good in Asia, Africa or South America.

Scott knows that some commercial tomatoes taste pretty good. After he retired, Scott has been on several river cruises, and he can attest to the reasonably good flavor of the tomatoes served on those cruises.

“Here’s the thing: When people go to the grocery store, they’re not necessarily going there with the goal of buying the tastiest tomatoes,” Scott said. “They go to the store and buy tomatoes, thinking, ‘I’m making a salad tonight or I’m making tacos tonight.’ Commercial tomatoes get a bad rap because people compare them to home garden tomatoes that don’t have to be packed and shipped. We want to change that perception.

“In my career, there has been a dissatisfaction among consumers with the flavor of commercial tomatoes,” Scott said. “We’re trying to make it so that in the future, people think, ‘tomatoes taste good’ and wonder why there used to be dissatisfaction with them. I have long  had a hypothesis that if I could develop a tomato variety with flavor that everyone liked, then all the problems in the world would be resolved. Although this might sound absurd, there is still no evidence against the hypothesis because there are always some that don’t like the flavor. If the proposed research is carried out, then I would keep the hypothesis but change the ‘I’ to ‘we.’”