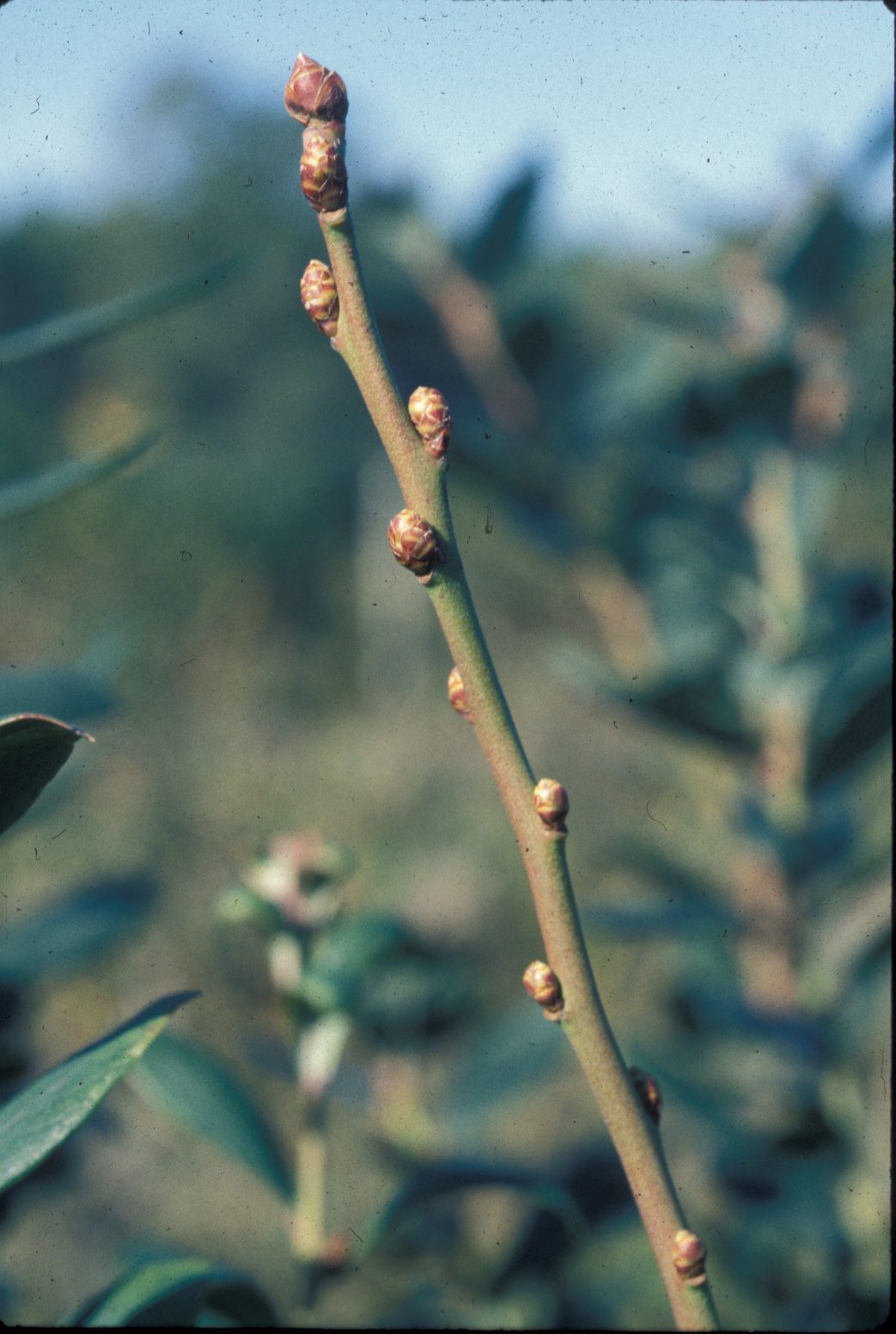 As winter approaches, blueberry plants respond to the changing environment in ways that should be addressed through management practices. Shorter days and cooler nights are environmental cues that stimulate changes in blueberry plant growth and development, such as terminal bud set and the cessation of shoot extension growth, the initiation and development of flower buds, the onset of dormancy, acquisition of cold hardiness and accumulation of winter chilling (in deciduous production systems).

FLOWER BUD DEVELOPMENT
Most flower buds develop during the late summer or fall on the summer growth shoots that developed following postharvest pruning, although some flower buds may be located lower in the canopy on spring flush wood. The exact time of flower bud initiation varies with cultivar. For example, Emerald plants usually begin developing flower buds in August, while Jewel plants will not usually begin significant flower bud development until early October.

Early fall defoliation can result in reduced flower bud initiation and development (Figure 1 and Figure 2). Therefore, it is important to provide a sound leaf disease management program throughout the summer and into the fall. Furthermore, if the evergreen production system is used, it is imperative to keep the foliage healthy and disease-free through the winter since these leaves are supporting the early crop the following year. Disease-infected leaves from the previous fall can serve as a source of inoculum for disease development on the new spring growth.

DECIDUOUS VS. EVERGREEN
Some fall management practices will vary depending on whether the grower employs the traditional deciduous system or the evergreen system. The deciduous system requires plants to go through a winter dormancy during which they are exposed to chilling temperatures at or below 45 degrees. Once enough chilling has occurred (which varies by cultivar), growth will resume after exposure to warm temperatures.

HYDROGEN CYANAMIDE
A major concern for Florida growers who use the traditional dormant production system is insufficient winter temperatures cold enough to satisfy chilling requirements, even for low-chill blueberry cultivars. Hydrogen cyanamide (HC), including Dormex and BudPro, is often used by conventional (non-organic) growers to ameliorate the negative effects of insufficient chilling. HC can assist under-chilled blueberry plants by stimulating an earlier and stronger leaf growth flush and a more concentrated bloom period than would otherwise occur.

Not all southern highbush cultivars respond well to HC treatment. For example, Emerald and Farthing are generally considered HC-tolerant and may benefit from HC sprays. Other cultivars, such as Jewel and Primadonna, have been damaged by HC sprays. Individual cultivars vary in their response to HC and should be tested prior to large-scale use.

In general, response to HC treatment has been erratic, and more flower bud injury has been observed in Central Florida than in North Florida, especially following mild winters. When considering using HC, many factors come into play. These include application timing, application rate and cultivars treated. For more information on this topic, see Table 17 in the 2019 Florida Blueberry Integrated Pest Management Guide and Reproductive Growth and Development of Blueberry.

IRRIGATION ADJUSTMENTS
Irrigation rates should be adjusted for the fall and winter. As days become shorter and cooler, blueberry plants use less water. Research in Florida has shown that average water use by blueberry plants declines significantly during October compared to September. For example, Emerald blueberry plants in north-central Florida that were grown under the traditional dormant production system used only about 60 percent as much water in October as they did in September.

Water use continues to decline during November, December and January. Therefore, irrigation programs should be adjusted to the changing weather conditions during fall and winter. Carefully monitor soil to maintain adequate moisture needed for healthy roots and to prevent drought stress. Where foliage persists throughout the fall and winter, as in the evergreen production system, evapotranspiration demands will be higher than in the deciduous system, and irrigation programs should be adjusted accordingly.