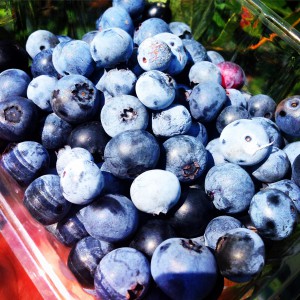 From the U.S. Highbush Blueberry Council

Folsom, Calif. April 10, 2017 – With global blueberry production up 40 percent 2012-2016 and projected to reach 1.45 billion lbs. in 20171, the U.S. Highbush Blueberry Council (USHBC) is focused on driving demand upward on the same trajectory. U.S. per capita blueberry consumption grew 599 percent from 1994-2014 – more than any other fruit or vegetable studied2 – and the USHBC’s newest research indicates further room for growth.

In late 2016, the USHBC issued an opportunity assessment study to examine which consumer and business segments are best suited to absorb the building volume of berries coming to market.

“We were pleased to find that, among the top fruits – including bananas, strawberries, apples, grapes and citrus – blueberries are the only one expecting increased consumption in 2017,” said Mark Villata, Executive Director of the USHBC. “The research also helped us refine and expand our consumer and business target audiences so we’re able to concentrate on those with the greatest growth potential.”

Room for Growth
The study found that heavy and moderate blueberry users, who represent half of the U.S. population (25 percent each), show the most growth potential of all user segments.

Heavy users consume 19+ cups per year, are mainly ages 25-45, have children in the home and span all ethnicities. Of this group, 73 percent see blueberries as a part of their lifestyle; they will go out of their way to purchase blueberries, and take time to understand the nutritional composition of blueberry-containing foods. Fresh and frozen consumption among this segment is expected to increase by five percent in 2017.

Moderate users consume 6-18 cups per year, and span all ages and ethnicities. Blueberries are projected to go from moderate users’ #6 preferred fruit to #3 in 2017. Among the moderate user segment, fresh and frozen consumption is expected to increase by 12 percent in 2017.

“Our summer campaign launching in mid-May will build on those strategies and others,” said Villata. “We’re developing new recipes and promoting them in a way to fit moderate users’ needs, from offering simple, visual recipe guides to partnering with individuals, food and fitness influencers who evoke trust and can aid in establishing blueberries as our target users’ favorite summer food.”

The Blueberry Council is the go-to resource for blueberry marketing insights and tools. To learn more about its research and promotion efforts, visit littlebluedynamos.com and ridethebluewave.com.