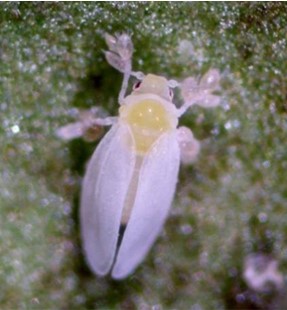 The sweetpotato whitefly (Bemisia tabaci) is one of the most problematic pests in vegetable production in the world and it is a key pest in squash. Most significant damage caused by this pest is due to the transmission of viral diseases and its ability to rapidly develop resistance to pesticides.

Females can live up to 24 days and lay up to 300 eggs. Eggs are oval, pearly white to yellow, and darken as they mature.

Whitefly nymphs disperse briefly within the same leaf and then attach permanently to the leaf while continuously feeding on its contents. Before turning into adults, nymphs are less flattened and have big red eyes.

Sweetpotato whiteflies are usually found living and feeding on the lower side of squash leaves. Nymphs excrete honeydew that accumulates on leaves, flowers and fruit when populations reach high numbers. This results in sooty mold (fungus) development, reduction in photosynthesis and fruit losses.

Feeding of nymphs is also associated with the development of squash silverleaf disorder in pumpkins, winter and summer squash, and some types of butternut squash. Squash silverleaf causes the newly developing leaves to turn silver due to proteins in the nymph’s saliva. Decreased photosynthesis and yield reductions result from high silvering of the squash leaves.

The management of plant viruses is best achieved when resistant varieties are available. However, there are no squash varieties resistant to whitefly-transmitted viruses yet. Therefore, squash plant viruses are mainly managed by suppressing the vector.

Sweetpotato whitefly populations are usually managed using insecticides that are applied on a weekly basis. However, the development of resistance against these insecticides is always a major concern. Entrust (spinosad) is a low-risk pesticide commonly used in vegetable crops, but it is not effective against whiteflies. Other low-risk pesticides such as M-Pede® (soap concentrate) or Azera® (azadirachtin + pyrethrins) are effective against whitefly populations and can be used together with biological control agents like predatory mites.

The predatory mite Amblyseius swirskii is an effective predator of major pests found in Florida squash including sweetpotato whitefly and thrips. A. swirskii feeds mostly on whitefly eggs and small whitefly nymphs. Data from University of Florida biological control field studies showed that the predatory mites released onto squash leaves can rapidly disperse to other plants and suppressed whitefly populations as early as four weeks after planting. Additionally, squash silvering can be significantly reduced when this predatory mite is released.

Zephyr squash is very attractive to farmers and consumers due to its green-yellow tone, but it was observed to be highly attractive to whiteflies as well. This is probably due to the light green color of the leaves that make the plants easily detected by whiteflies.

No significant reductions in yield were observed despite high levels of silvering. However, plants were observed to be stunted and deformed when infested with high numbers of whiteflies and in the presence of whitefly-transmitted viruses. Thus, early management of sweetpotato whiteflies is recommended to avoid risking fruit quality.

Lorena Lopezis a postdoctoral research associate and Oscar E. Liburdis a professor at the University of Florida in Gainesville.