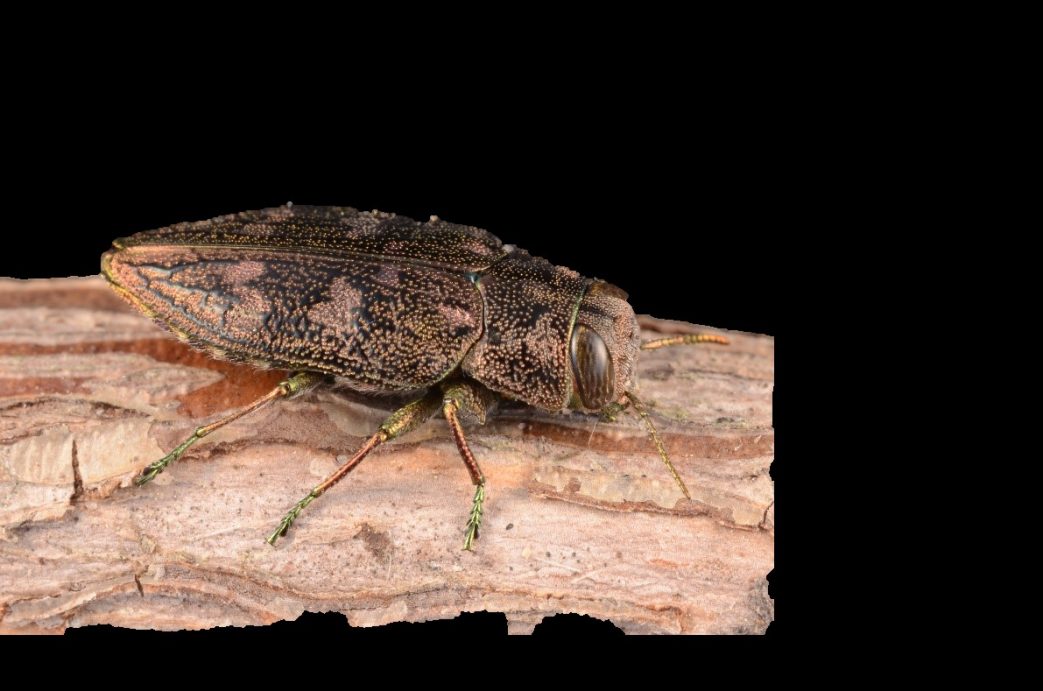 Since 2014, several Florida blueberry growers have reported seeing tunneling or girdling on the canes of their blueberry bushes. Oscar Liburd at the University of Florida has been investigating the source of the damage in blueberries along with his graduate students Lindsy Iglesias and Krystal Ashman in the Fruit and Vegetable IPM Laboratory.

In the summer of 2016, a flatheaded borer larva was found feeding under the bark of a blueberry bush. Additional specimens have been collected from blueberry bushes and have been identified by Kyle Schnepp at the Florida Department of Agriculture and Consumer Services (FDACS) Division of Plant Industry (DPI) as belonging to the Chrysobothris femorata species group (Figure 1). Chrysobothris femorata, the flatheaded appletree borer, is one of the species in the group and is a pest of apples and many other hardwood trees in Florida and the southeastern United States.

ABOUT THE BEETLES
Beetle larvae create tunnels filled with frass (larval feces) under the bark of the tree, causing the bark to be pushed up along the path of the tunnel (Figure 2). Flatheaded borer larval feeding continues throughout the summer, fall and winter months. Larvae pupate inside the cane for one to two weeks before emerging as adults.

Adult beetles are trapped in Florida during late spring through fall using purple panel traps (Figure 3). Sampling for larval infestations is done during the summer and fall months and consists of inspecting blueberry canes for new borer damage. In late summer, infested blueberry canes may show signs of leaf chlorosis (yellowing of the leaves).

Disease symptoms may also be present on infested bushes. Wood-boring beetles often attack trees that are already stressed, so it is possible that the flatheaded borer is attracted to diseased bushes. Alternatively, the injury caused by the beetle could make bushes more susceptible to disease.

Branches collected from infested blueberries during the surveys were submitted to DPI, and some tested positive for blueberry red ringspot virus and leaf spot (Colletotrichum sp.). “We are doing this in order to see if there may be a correlation between a virus or pathogen impairing the blueberry plant and the borer being attracted to the plant,” said Ashman.

ONGOING RESEARCH
Liburd and Ashman are continuing research on the pest through a FDACS Specialty Crop Block Grant and working in collaboration with researchers at University of Georgia, Tennessee State University and the University of Tennessee to evaluate the potential impact of the borer pest on blueberry production in the Southeast.

MANAGEMENT METHODS
Systemic insecticides, such as imidacloprid and thiamethoxam, will kill developing larvae. Pruning and removal of infested canes is a cultural control option and is currently the only option for organic growers. Since the beetle appears to attack bushes stressed by diseases or other factors, disease management, nutrient management and proper irrigation are important for reducing the risk of infestation.

Janine Spies is the IR-4 southern regional coordinator at the University of Florida.