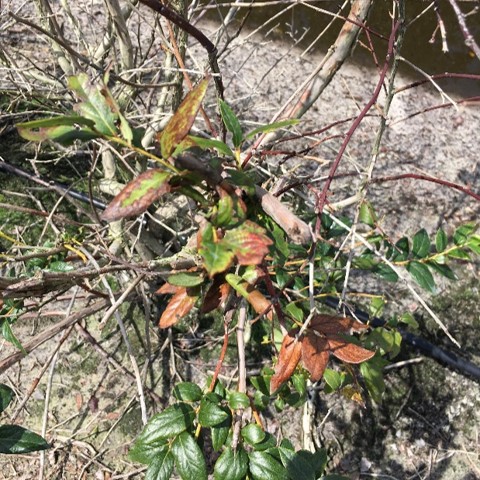 A blueberry disease that has impacted the Florida industry since 2016 was found in Georgia for the first time in 2020. While there is no cure for bacterial wilt, producers can apply preventative measures to slow down the disease’s progression.

“In Florida, they seem to be having increasing problems with it year after year, probably because the bacteria spreads so easily from farm to farm or even within a farm. It spreads by soil, water, anything that picks up soil or water can move the disease around,” said Jonathan Oliver, University of Georgia (UGA) assistant professor and small fruits pathologist.

Bacterial wilt was first identified in three separate locations in Florida in 2016. The disease was observed for the first time on Georgia blueberries last year at two locations in Clinch County.

Initial symptoms of the disease include marginal leaf necrosis, wilting and plant death, sometimes as quickly as three weeks after infection. Farmers need to be wary that symptoms can resemble bacterial leaf scorch or phytophthora root rot.

Unfortunately, certain cultivars are more susceptible than others, including Arcadia, Indigocrisp and Keekrisp. Cultivars that are moderately susceptible include Emerald, Farthing and Meadowlark.

“It looks like based on what they’ve seen in Florida that certain cultivars have much bigger problems with it. Unfortunately, those are cultivars that are increasingly being grown in Florida and also in Georgia because they have other traits that are good,” Oliver said.

“The more we grow of those cultivars, we definitely will probably see more issues with bacteria wilt. But we may also see it just due to spread. We don’t really have a good handle on what it’s going to look like in Georgia. But in Florida, every year a few more farms are found. I think it’s fairly widespread in parts of Florida now.”

Management relies mainly on prevention; keeping the pathogen out or limiting the movement of infected plants, equipment and soil between farms. Infected plant materials need to be burned.