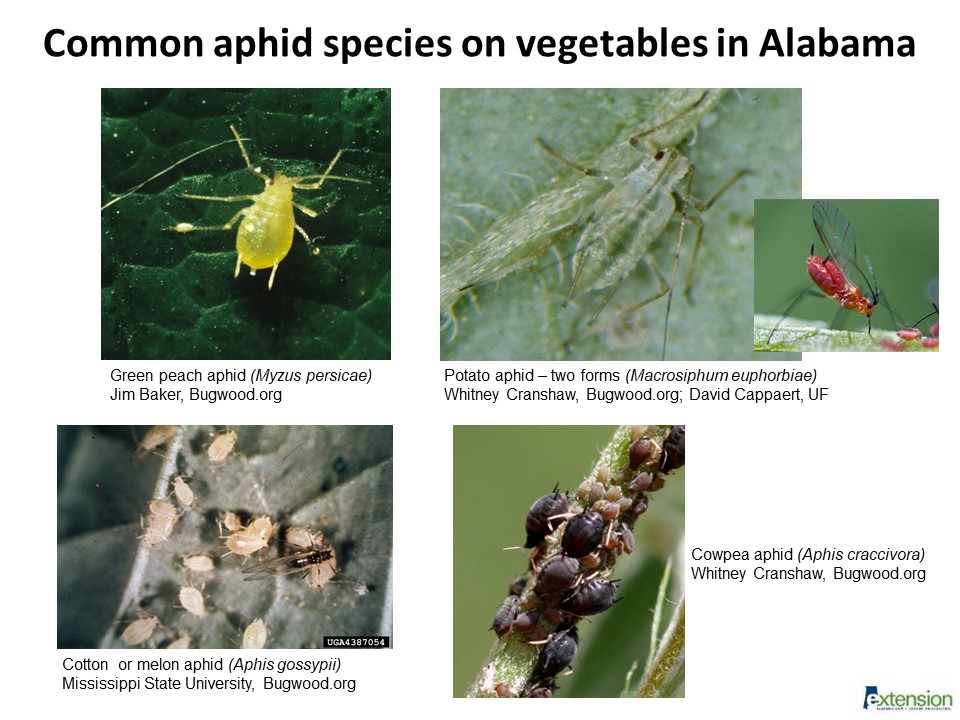 Aphids have been a challenge for vegetable growers in the Southeast. According to Ayanava Majumdar, Auburn University Extension entomologist, it does not matter whether a grower produces fall or summer vegetables, aphids are a non-stop issue.

Aphids are small insects, measuring approximately 1 to 2 millimeters long. They are shaped like tear drops and may or may not have wings. Once an aphid finds an optimal host plant, the insect may lose its wings.

Aphids can come in all different colors, making them difficult to scout. Majumdar says aphids can change color based on their sex, so a grower cannot scout aphids based solely on color.

An aphid has a long abdomen with two cornicles at the end of it. Majumdar compares the cornicles to tailpipes on a motorcycle and says the cornicles are a unique feature to look for when scouting.

According to Majumdar, there are several different species of aphids in the Southeast. The major species include potato aphid, melon or cotton aphid, green peach aphid and cowpea aphid. Majumdar says the melon aphid is a big concern in the Southeast because it is resistant to high temperatures.

There are some species of aphids that can transmit plant viruses as well. “This can do more damage by transmitting viruses than actually feeding on the plant,” Majumdar says. He uses the green peach aphid as an example of an aphid that transmits viruses. Majumdar adds that green peach aphid is also well-known for being resistant to several insecticides, so it is important to check with an Extension agent for management options if you believe green peach aphid is on your farm.

Majumdar adds that cowpea aphids can produce honeydew, which allows a fungus called sooty mold to grow. The sooty mold can actually stunt the plant by heavily reducing photosynthesis.

Aphids have an interesting reproductive system. Majumdar compares it to cloning. “Aphids are very good cloning machines,” he says. They reproduce quickly and efficiently, making management even more of an issue.

Aphids are a big challenge for organic producers since they have less options for products compared to conventional producers. Majumdar says because of this challenge, it is extremely important for organic producers to scout their crops weekly or a couple times per week. “The first detection of aphids is very important because that will tell you they have arrived, and if they like the plant, they will start reproducing quickly,” Majumdar warns.

Aphids are difficult to kill with organic insecticides. Due to their piercing and sucking mouthparts, they cannot take up enough of the poison to kill them. So, organic producers must depend heavily on contact poisons. Products such as paraffinic oils, insecticidal soap and microbials can help slow aphid populations with repeated applications.

Majumdar says he is still testing premixed organic insecticides such as Azera and Pyola in Alabama. “They hold promise, but we’re still testing,” he says.

According to Majumdar, the most important strategy to remember when organically controlling aphids is to manage the natural enemies. He says aphids have several natural enemies that will greatly reduce populations or slow population growth. Those beneficial insects include lady beetles, lacewings, minute pirate bugs and various parasitic wasps. Majumdar recommends planting diverse flowering plants to attract the beneficials. He also advises against overspraying. Beneficial insects are susceptible to insecticides, even the organic ones. Majumdar adds that growers can also purchase beneficial insects to release in their field or greenhouse.

Aphids can be easily controlled in conventional systems. For recommendations on conventional insecticides to control aphids, Majumdar suggests referring to the Southeastern U.S. Vegetable Crop Handbook.